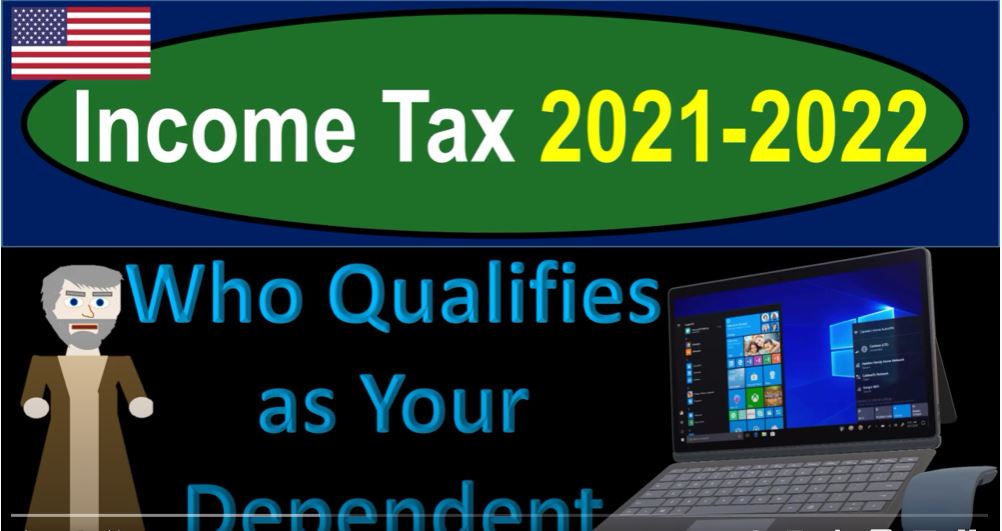 Income Tax 2021 2022 income tax software example who qualifies as your dependent, get ready to get refunds to the max dive in in to income tax. Here we are in our Lacerte tax software.

If you don’t have access to this software or any tax software, that’s okay, you might want to get access to a PDF file of the form 1040, which you can find on the IRS website@irs.gov IRS dot G O V,

the tax software helping us to enter the data a little bit more quickly. Jumping on over to the 1040 running different scenarios, we’re going to start off with our baseline scenario, that being our single filer, Adam Smith, living in Beverly Hills 90210, we got the 100,000.

And we’re gonna give the tax down here, that will be calculated by the system. So what the 87 450 taxable income 87 450, jump into page two tax calculated at the 1515. So we’re gonna go back on over here, put that in our Excel worksheet for the baseline 1501, five.

And so there’s our starting point, and we don’t have anything that we put down here in the payments at this point. So we got the tax liability going all the way down tax due at that point based on that calculation.

So it’s gonna be a qualifying child son lived for the 12 month timeframe. So meeting that test, let’s go on back to the forms then and back to the first page, and we’re gonna say, okay, single filer, we’ve got our dependent now here, Sam Smith, 444, social security number son checked off here for the child tax credit, because they’re going to qualify there,

therefore, credit for other dependents not check, because you’re typically going to have either or of these two items. And it’s a qualifying child. Here Sam is. So in scroll back down, we got the same starting point.

But the major benefit generally being on the second page, where we’re talking about the credit that could be involved for the qualifying child. So in this case, we have it here at the 2003 50. And you can get more detail on that credit on form or schedule 88128812 is going to be here.

So there is the schedule for the qualifying child. Now we’re gonna go into the schedule, and a lot more detail in future presentations, because we’re just looking at the qualifications for the dependents.

But the major benefit that you would get would of course, be if it was a qualifying child, the the credit for the qualifying child. Now let’s do the same for the married filing joint,

which is going to change kind of the income, the income threshold, because now you’re gonna have in essence, two people that will keep it up to 100,000 on income. So let’s say Adam gets married to Eve, Adam says,

we’re going to keep it at the 100,000 of income. 25 100 is now going to be the standard deduction not being affected by the child in this case, and we’re going to be picking it up over here 25 100 On our item here, this is going to be equal to the married deduction, we can verify then the 75 Nine,

And basically, that’s because of the income threshold now with two individuals, there’s gonna be some income phase out, basically, that will take place, there also could be a refundable portion and so on, that we’re gonna have to take into consideration. We’ll talk more about that later.

But just right here, we’re looking at the dependents. And one of the major kind of components that would be involved would be whether or not you’re going to have the child tax credit. And we’ll get into the advanced payments, refundable portion,

phase outs and whatnot when we talk more about the Child Tax Credits itself. Now, of course, you could have more than one dependents. So if we have two dependents, for example, now we’ve got the married filing joint Adam and Eve living in Beverly Hills 90210.

Or that could could upset the client here, but in the case shouldn’t have an impact in our calculation, we’re gonna go to them to the second page, and we’re going to save now you have an impact, of course on the credit, which is going to be one of the major kind of impacts that you would have.

So now let’s run a scenario where basically, it’s still a son here. So we’re now still married filing joint Adam and Eve, we’re now just have one dependent, that being related qualify a child, but the child is over the age limit of 19.

So now we’re gonna say if they’re over 19, and they’re not, then a qualifying student, then they’re still gonna, they’re gonna get a credit, but not the child tax credit, you’re gonna get possibly their credit for other dependents, which will be on page two here. So we can see then on page two,

the benefit a lot lower dollar amount, generally the non refundable child tax credit, or the other dependents. And you can see schedule 8812. For more detail, we’ll get into that a little bit more in the future. But again, that’s the major component or difference or change that you would see with the dependents.

And we’re going to say that there’s still a son here, child living with a taxpayer, child not living with the taxpayer. If we go back on over to Sam, the son here, you can, you’ve got to make sure that you take into consideration the age limitation or the age tests. So if you say, if you say that the son is going to be over that 19 limit, then you could say, well, they got to be under 19,

then they may still qualify for the other, the the other dependent in that case, as well. So then, if we go back on over, we’re gonna go back on over to the forums, and say,

Okay, now we got Sam at the sun, and they’re a qualifying child, but they’re going to be over the threshold. So you got the different age thresholds.

So remember, it was 19, to be a qualifying child or 24, if a student, but there’s another age test, which I believe was 18, to see if they’re going to be qualifying for that, basically, the child tax credit.

But we’re basically just kind of focusing in on the dependents at this point in time, we’ll get into more of the nuances with the credits at a future point.

So now, let’s say for example, we have Sam here, who was 1985 Date of birth. And we’re gonna say the relationship is just other in terms of the relationship tip test, but they lived with a taxpayer,

us The Smiths here for 12 months, and they probably would have a different last name, if it was someone other than a related person, we’re gonna say other for the dependent other than a child, we’re going to say, and then when applicable.

So we’re going to go back on over here and say, Now, we’re talking about a dependent here, which we’re assuming we’re not related to them, but they’re living within our household, and we possibly then would have the credit for the other dependents,

but they would have to qualify in that instance, for the non relation test, which would include having a very low income level and and having half of the support test being met as well, the income threshold being below I believe that 4300 of the earned income in that instance. And so again, you’d have the other credits, you wouldn’t get the child tax credit

that would be then calculated on page two here. So the general the general idea, as you think about this, and go through the question here, is someone going to be a qualifying child?

any person other than your spouse who lived with you all year as a member of your household if your relationship didn’t violate local law, if the person didn’t live with you for the required time, you can see the exceptions to that rule as well.