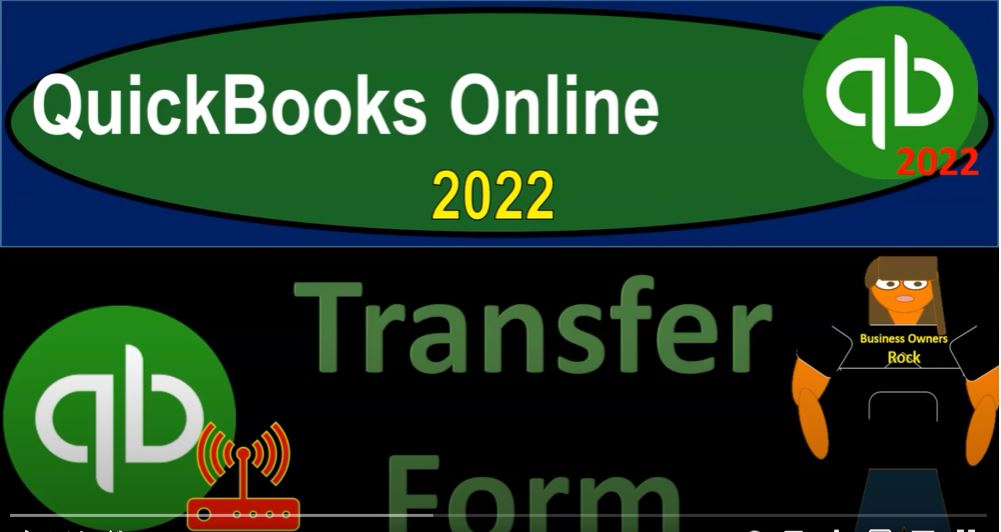 QuickBooks Online 2022 transfer form, get ready because it’s go time with QuickBooks online 2022 Online in our browser searching for QuickBooks Online test drive going into the test drive using the United States version of it and verifying that we’re not a robot sample company Craig’s design and landscaping services holding CTRL down scrolling up just a bit to get to that 125%. We also have the free 30 day test trial version open, just so we can see the business view over here.

If you don’t have access to that, that’s okay, we’re going to be using it more in the second half of the course. Going back on over to Craig’s design and landscaping services hitting the drop down up top, we’re looking at the transfer form at this time, typically used if there’s a transfer between bank account type of accounts, like a checking account to a savings account, or like a checking account to a PayPal account or something like that. Now note, we’re going to enter multiple transactions and enter this transfer in a few different ways.

Because you could enter it basically with an expense or check form or with a deposit form. Or you can enter the transfer, the transfer gives you a little bit more information because it’s telling you hey, this is an intercompany transfer, as opposed to something like a deposit, which would kind of indicate it’s coming from outside the company, or an expense form or cheque form, which would kind of indicate that you’re paying someone outside the company. So it gives you a quick glance at a little bit more information.

Also note that because we’re dealing with banking transactions, these are also forms that you might see kind of within the bank feeds. So if you get those intercompany transactions that are inter bank feed transactions, it would have to go from one bank feed to the other. And again, you might see that done with basically different forms depending on what side of the transfer you are in.

And open up our trusty balance sheet report, we’ve got our bank type of accounts up top. So we’re looking really in this kind of drop down, these are the type of accounts we’re focused in on, let’s try a few different transfers, just so we can get a feel for it. Going to the to the tab to the left, let’s imagine that we’re transferring money from the checking account into the savings account. So I’m going to hit the plus button. And we’re going to say let’s put a transfer in place.

And we’re going to say transfer form. And it’s going to be going from the checking account to the savings account. And we’ll say that it’s for $100 $100 tab, let’s do this on the first on January 1 of 2022, then of course, we can add a memo memo that would be added here. And then if there’s any attachments or something that we can attach the attachments if we want that information to support basically the transfer that is happening. And so and we could make it recurring, we won’t get into that now, we might talk more about that in the future. Let’s save it and close it.

And then go back on over to our reports. And what we would expect to happen have most likely happened I would assume checking account, if we go into it, we’ve got the transfer form here, decreasing from the checking account, if I go into that, then we see a transfer form as opposed to like an like an expense form or check form closing that back out. Notice it’s a decrease.

Normally, when you see a decrease you think checking account, or check or expense form, but it says it’s a transfer form, which again gives you that kind of indication that it’s something that’s an internal type of transaction. That’s one purpose you might use for basically the transfer form. And then of course, in the savings area we’ve got then the checking account here is the other side.

And it’s a transfer form increasing. On this side, you would expect if it was an increase to a checking account type of account that it would be a deposit. But in this case, it’s a transfer which kind of indicates that it’s not coming from an external source like a customer. Okay, let’s go back up top.

And so there’s the other side and In this is, so it’s really a transfer that is happening. And let’s put this for $200, just to switch things up a bit. And this will basically do the same thing, but it’ll use a different form to do it. So I’m going to say, let’s say save it and close it. And let’s go back to our trial balance. And so then if I go into my checking account, now I’ve got I’ve got two, Trent two decreases, one in the form of a transfer the others that deposit form.

So if I go into that deposit form, there, there is the deposit form, closing that back out. And that’s a little bit deceiving, as you can see, right, because usually when I see a deposit form, in my account, I expect it to be an increase. And this is a decrease with a deposit form because it was a deposit into the savings account.

And that’s one reason the transfer is a little bit a little bit nicer, because that’s telling you, hey, look, this is an intercompany transaction. Now note that if you’re using bank feeds, and I was entering the bank feeds on the savings account side of things, and I saw a deposit in it, the system might just record it as a deposit, right. So that’s why that might happen. But you would kind of like it to be a transfer to make it a little bit easier to see when you’re looking at this kind of detail. Going back to the report.

On the other side, on the savings account side, you see that we have now the deposit form, which looks correct here, because it’s a deposit. That’s kind of what you expect. But it’s not a deposit from someone external. So again, it might be giving you more detail to have a transfer. And then of course, you could do the same thing if I went back onto the first tab, and I go to the New button.

So the financials are correct still, but it’s this descriptor over here isn’t as descriptive as it could be will be easier to see if it was basically a transfer. If I go back up top, and I go to the other side, on the savings account side of things.

Now I’ve got this expense form that’s reporting an increase a deposit. That’s where it looks really funny, because now I would expect an increase to be a deposit or possibly a sales receipt form or you know, or receive payment form maybe not normally an expense form. So it would look more proper hear that if I recorded it as a transfer, I could put it in the memo. But it would be it would be easier to see if that was a transfer. That’s the general the general idea with the transfers.

Now if I go back to the prior tab, you could use this transfer to transfer to other accounts. So you’ve got other accounts, but typically, so you’ve got you know your other current assets accounts, your fixed assets, accounts, your MasterCard, and visa, but typically it will be with some kind of financial institution account as well. And the place when when you’re doing the manual data input like this, then you have control over that.

And you can decide, okay, am I going to use a deposit form and expense form or transfer form to transfer from one checking account to another, where it gets a little bit more tricky is when you do the bank feeds. And you want to kind of think about what’s happening with the bank feeds when you’ve got those intercompany transactions, the transfers from one to the other.

Because if I was going to a transfer, that’s going to be going out of the checking account that’s going into the savings account, the bank feed might read it then if you go into the checking account as an expense form, or if I’m going to the to the savings account side of things and entering the information from there, it might read it as in essence that deposit form.

And so that’s when you got to be in so what you would like to have in that system is a transfer form but it’s going to automatically read it if you’re pulling in the bank feeds an increase typically as a deposit a decrease as as kind of a check. So that’s we’ll talk more about bank feeds of course and the bank feed type of section but that’s the general idea with the transfer