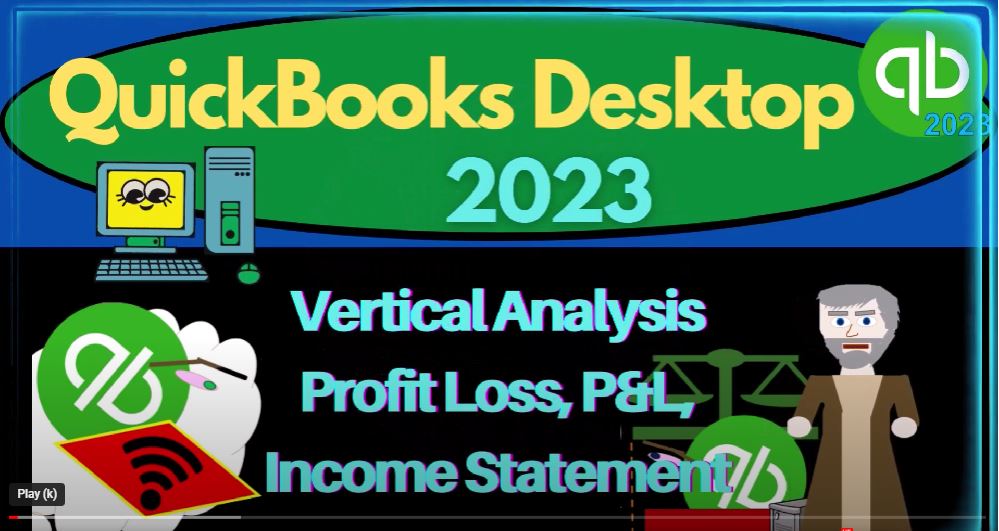 Here we are in QuickBooks Desktop sample Rockcastle construction practice file provided by QuickBooks going through the setup process we do every time maximizing the home page to the gray area in the view drop down, we got that hide icon bar, open windows checked off,

open windows open on the left hand side reports drop down, we’re going to be opening up the profit and loss the P and L the income statement arranged into the change and we’re gonna go from Oh 101 to four to 1231 to four, customize that report fonts and numbers change the font to 12.

Okay, yes. And okay, let’s open up the balance sheet too. So go into the reports drop down company and financial the Big B balance sheet down below,

hitting the drop down, we want to bring this then to the fiscal year of 1231 to four, customizing the report to the fonts and numbers so we can change it to 12.

Okay, yes. Okay. There’s the setup process, we do every time we’re focusing in on the P and L Profit and Loss Income Statement type of reports. Last time, we did a comparative report, doing kind of a horizontal type of analysis, you might call it this time,

we want to do a vertical type of analysis, remembering that in prior sections, we did this, in essence, the balance sheet, and we saw that we get that vertical kind of component or vertical analysis that kind of compares everything to the total assets.

Typically, to compare things to net income, what we really want to be doing is comparing things to the goal of the business, particularly the profit and loss, that’s income generation. In other words, you can think of the income statement as in essence, income and expenses.

The goal of the business is to generate income revenue generation, all the expenses that we are incurring are done so in order to generate the end goal of income. So typically, when we do this kind of vertical ratio analysis,

we want to compare everything not to net income, but to total income. So that’ll be the general idea, you can see the difference here, when I go to the Customize up top to do this, to click this off, when I hit it, when I hit this thing,

Now you can tell that that one is the one that we’re comparing everything to because it’s the only one that has 100% next to it as the percent meaning you’re taking this divided by itself,

one or 100%, everything else is being compared to it. So on the income side of things that kind of makes sense, or similar to what we saw on the balance sheet. So we might say,

So so we can’t really compare our dollar amounts to them. But we might be able to compare our percentages to them.

Now, given that, you might say, well, then on the income statement side of things, shouldn’t we be comparing all the expenses, in essence, like to total expenses down here, you could do that.

But but really, you and another way of thinking of it is all the expenses are there to generate the income. So since that’s kind of like the goal of the business,

So moving the decimal two places over, we’re at the 30, we’re at the 39.6. About now the cost of goods sold. Notice it’s a little bit different for a construction company.

But those are the things that are kind of part of the inventory, if we just bought things, and then we marked them up and sold them.

marked up and sold, whatever that markup would be, would be reflected in the relationship between the cost of goods sold, and the income. That’s why this sub calculation of cost of goods sold, breaking it out in its own expense category is a useful tool.

And then of course, we have all the other expenses that we can break out down below, we can compare and kind of get an idea of the auto versus insurance on a percentage basis, once again,

being able to compare these to other companies as well to see if they have similar relationships on theirs,

especially as you can see the gross wages clearly that when oftentimes, this is gonna be the payroll will be a significant impact on or a significant part of our expenses and a big item in relation to the income.

Alright, so if we wanted to clean this up, then we could format it, I’m going to change this to a maybe an income statement just so we can make that change, which could be useful if you’re providing it to somebody else.

We’ll call it a vertical analysis income statement or something like that. And then this is still good here, I’ll remove these items on the left will make negative numbers bracketed and remove the pennies. Let’s customize to do that. To do that, we’re going to go to the header and footer.

And I’m going to say let’s call this a vertical a now assists income Income Statement state meant, and then I’m going to get rid of the date, the time the report basis, let’s put our name in the footer,

put our name in the footer, and then fonts and numbers, we changed it to 12 on the size.

Let’s put some parentheses around the negatives. Let’s remove the pennies. Let’s make the negatives red. That’s what our custom has been.

So we’re going to say okay, so there we have it. Vertical analysis, another report that can be quite useful. And we can batch that together as we’re putting together

our month and possibly our quarter and our year end reports that we might be providing to our our clients. Note that we could also create this column as well when we do comparative reports as we saw in the past.

And then I did this kind of comparative report by saying totals and bring it down to a month. For example. It gets quite long because now you have these extra columns, but now you’ve got November.

You’ve got November. You’ve got October, November and December, and then you’ve got the percentages as well. So that’s a little long.

So maybe like two periods would be good for that kind of report. So maybe you did the last two quarters, for example, maybe I went from, oh 701 to four to December, the last half of the year, and then said, let’s make it on a quarterly basis.

And okay, so then we’ve got two quarters and the percentage for both and the percent for the total. Maybe that’s not too much, and it could be digestible and give that more information.

It doesn’t work so well if you do the other kinds of comparison with the previous period, because that’s typically designed to use kind of like the percent change and the dollar change here, but you can experiment with using those types of reports and trying to include like a vertical analysis column, as well.