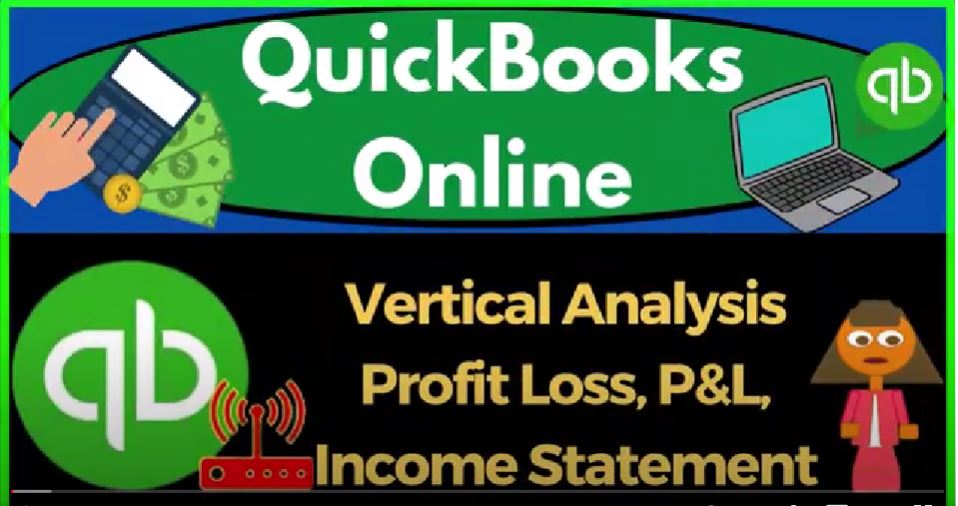 And we’re going to be choosing the United States version of the software and verifying that we’re not a robot. People often think I’m a robot because of my Superman like strength. But no.

Anyways, we’re going to scroll in a bit by holding down control up on the scroll wheel currently at the one to 5% on the Zoom, and we’re going to hit the cog drop down, noting that we’re in the accountant view, as opposed to the Business View, we’ll try to toggle back and forth between the two views to see where things are located within them.

That’s the setup process we do every time back to the tab to the right, we’re now going to be doing what we would call a vertical analysis. So remember, these are our main two financial statement reports balance sheet income statement, otherwise known as the p&l profit and loss.

And we looked at comparative or horizontal analysis last time, which often takes the place of or looks like or will look like having one period compared to a prior period. And then the difference between the two and a percentage change. Now we’re going to do a vertical analysis.

Now note, when we did the vertical analysis on the balance sheet, it’s kind of a little bit more straightforward, because we compare everything to like the assets line.

But on the income statement, it doesn’t really make sense for us to compare everything.

So we’re going to compare everything to the the revenue line, that’s the most the most common format. So let’s see what that looks like it’s quite easy to do, as long as you can pick the right item here.

So we’ll hit the drop down. And you’ve got these percent of rows, that’s not quite as useful on an on an income statement.

Usually, unless we’re breaking it out in some way, you’ve got your columns, which you would think maybe that would be the way to go for vertical analysis, and then you’ve got your income, that’s the one we typically want, you could have a percent of expenses as well.

So we want to compare everything to it. So now we’re gonna, we’re gonna pull out let’s pull out the trusty calculator for some calculations. And then, so now we’ve got our income,

we can tell that this is a comparison to income, because the bottom line of the income here 100%. So it’s comparing it to itself. Now it makes sense to look at the income line items.

And you’ll recall when we did this on the balance sheet, if I hit this drop down, you’ve got a bit different choices down here, we don’t have as many choices, because it’s a point as of a point in time report.

And we’re going to choose the percent of the column on this one, and then run that.

When that happens. You get out okay, that makes sense. I’m just gonna I can break that out into a pie chart. It’s kind of like looking at at my investment portfolio, investing in bonds, versus stocks and whatnot or something like that.

And and these are investments in my assets in the business that I’m using to generate future revenue compared to the total assets. If you look at the income statement, then usually we compare to revenue,

the top half looks similar, these are all the income line items compared to total income, I can make a pie chart, you know of that if I want to do so this would be two to four 6.5 divided by the total 10. Two oh point 772. Places over on the decimal is 22.202.

So so that makes sense. But note that on the revenue side of things, you usually don’t have this many accounts, you usually only have like one to five revenue accounts. They have more here, because it’s a construction kind of company.

But on the on the expense side, it doesn’t make as much sense like, Okay, well, I would expect that all my expenses to be compared to the total expenses.

But no, we’re going to compare all the expenses, those things that we had to consume, in order to generate the revenue, that’s what an expense is, to what we use them for the revenue line item. So you can’t create a nice pie chart with the expense side of things,

this isn’t going to add up to 100%. In other words, because we’re comparing to the revenue line item, so I can go up top, you could do a bar chart, if you wanted to, if you want to do a graph on it.

So if you’re if you’re feeling like you needed some kind of visual, but we can then do the fourth seven 1.86 divided by the total income, which is here, divided by the 10 to oh point seven, seven. If we move the two places to the right, you get point seven 3%.

So we’re comparing everything to income. Note that the cost of goods sold is usually, if you just sold inventory quite high, that’s going to be that’s why we have this comparison of the gross profit.

And it’s usually going to be some something that if someone just sells inventory, they’re quite aware of the relationship between you know, the cost of goods sold, and the income.

And then we can look down here on a percentage based system, we can see the dollar amount. And we can also see the percentage as comparison to the revenue, the revenue, in essence, what we’re pulling in or earning the expenses what we consumed in order to generate that revenue.

Note that if I’m comparing my data to prior data, I can compare the dollar amounts. But if I’m trying to benchmark to the industry average, or to another company, which is usually larger than my company,

You know, do they spend up to you? Are they spending a lot and advertising advertising is one of those areas? That’s quite confusing for a lot of people, including myself, it just drives you kind of crazy, because there’s so much money that you spend on advertising,

just seems ridiculous. But in any case, then of course, you know, insurance, how much are they spending on employment, you can look at the key line items here and compare them to the income line item. Okay,

so then if you go up top, you could do the other kind of vertical analysis just to test them out, but they’re not as common, that’s the one you want to know, if it goes to a percentage of the column, just to take a look at it.

so you’re gonna get some funny numbers, this might be helpful for some for some ratio analysis. But it’s not the most common way you’re going to see this kind of report.

So it could be useful in some cases, but it’s probably not like the standard report that you would be generating in a package of reports, you could then do it at a percentage of expenses.

So now you’re comparing everything to the expense line item, which is is probably useful down here when you’re looking at the actual expenses, because now you can kind of look at it more of a pie chart analysis in terms of your expenses,

and see where you’re spending the most money in relation to total expenses. Here’s your total line item. So all of your expenses right here will then we’ll then total up to 100%.

And you could think of it in a pie chart format instead of comparing your expenses to the revenue generation. So that could be useful I would think just for this expense area.

Yeah, but but probably not as useful comparing your revenue to total expenses, it’s probably not as common of a technique. So I’m going to hit the drop down again, your most common thing here would be comparing to income, boom,

run it. And then you could also have multiple periods where you include a vertical analysis. So for example, I could say, I’m going to hit the drop down, and change it from the totals to month,

or let’s go to quarters quarters. So now you’ve got multiple quarters, that also give you the vertical analysis. So when we’re starting to think about how we’re going to present these reports, I typically think of the technique to be,

I’m going to start simple with a simplified profit and loss, possibly a single step, profit and loss if I can, and then get more detailed, going into it.

Assuming that the people I’m dealing with aren’t accountants, oftentimes, they don’t want like to be overwhelmed with data. But sometimes they do.

Sometimes you might say, Hey, I don’t need this redundancy of multiple reports that have the same information because I still have the total over here, maybe you make one report that has a lot of detail on it.

And, and therefore you don’t need that more simplified reports that are given you the detail, or the same information and less detail.

And so and then you got to compare, you know, how many reports do I want with a vertical analysis? How much is that kind of ad versus clutter?

The you know, the report, and then how many reports do I want to be putting together in terms of comparative type of reports, you’d probably want to break that out on a month by month,

And then I’m going to just say that I would then customize it up top and then get rid of a sense, brackets, red, this is what we do every time if I was going to give it to someone externally, I’m going to change the header,

I’m going to make it a income, let’s say vertical, let’s say income statement, vertical analysis, CES. And then get rid of the date, time report basis, boom, and run it. I was running. So there you have it.

And then you could save that beautiful report, save customization. So that when you’re going to print these out on a monthly basis, perhaps I can go to the first tab,

I can refresh that tab. So it’s fresh stuff is in it. Just like eating a salad right from the garden. It’s nice and fresh. And then I’m gonna go to the reports. And then custom reports. There it is. There it is.

That looks good. Okay, so let’s just take a look at the business view just to see where we’ve, where our stuff is located on the Business View.

We’ve only been looking at the reports so it’s pretty straightforward here. You’ll recall here’s the homepage the get things done page. That’s what they call it. I don’t know why it’s a little seems a little but whatever. Home seems easier to say.

Get things done. I get I’m going to the get that’s you got to go away from home to get things done usually lets you work at home I guess like most people anyway. So here’s the reports, standard customization, there it is.