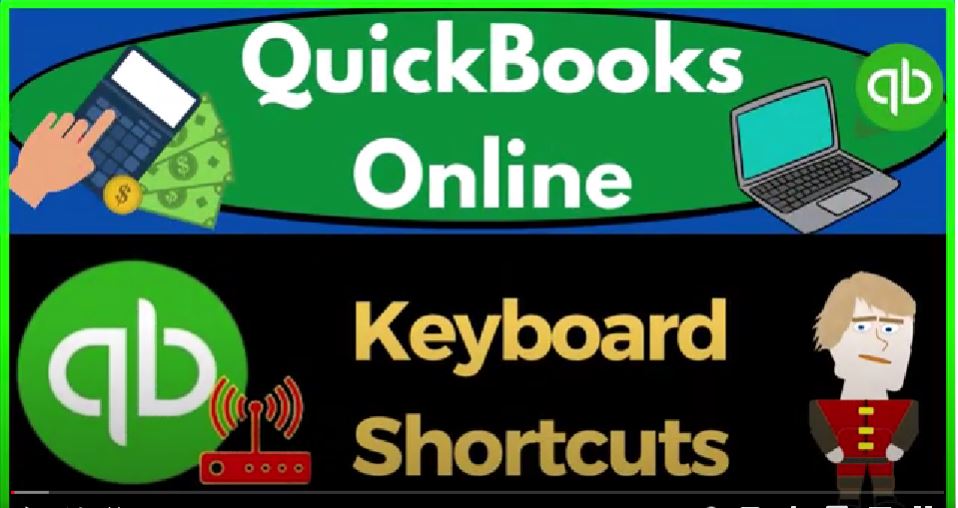 for QuickBooks Online test drive selecting the option that has intuit.com and the URL into it being the owner of QuickBooks, we’re going to be using the United States version of the software and verify that we’re not a robot. Zooming in by holding down control up on the scroll wheel, we’re currently at one to 5% on the zoom in,

we’re going to be selecting the cog drop down just to note that we’re in the accountant view as opposed to the business view, we will try to toggle back and forth between the two. So we can see where things are located in the two views,

scrolling up ranging are a changing a 101 to two to 1231 to two, tab, run it to refresh it. That’s what we do every time going back to the tab on the first tab. And now we just want to look at a couple of shortcuts that could be useful.

Now I think that the QuickBooks navigation system is quite well oriented. So you don’t really need a lot of shortcuts to get into the standard forms. But if there are some forms that you open up a lot, then you might

So we can I won’t be using the shortcuts most of the time when I’m doing the normal presentations. But if you want to note the shortcuts, and then try to think about which ones would be most useful for you,

here’s a list of shortcuts, it’s in our one note item here are our OneNote resource. So you can find it here I have a tab that has the the homepage or it gives you a flowchart and then the shortcuts underneath.

So here’s one for the CTRL ALT i for an invoice so invoicing of course very common form that you might be using a lot. So instead of going into the invoice, you can go straight there for writing a check for expense form, which is kind of like a check form as we saw it without the check number a receive payment.

So after invoicing, receiving the payment, the estimate the lists, now I think if you work a lot with the lists, maybe that would be like a more useful shortcut, because the lists are a little bit more buried, to find, whereas the invoices and the checks and whatnot are right under that plus button, which is always pretty close to find.

Therefore, the shortcut might not save you as much time there. So the accounts, customers, so these are another one’s customers and the vendor centers,

I think those are good places possibly to have shortcuts as well. Because if you’re working a lot, sorting your customer view, then that one’s a little bit more buried, because you got to go into a couple tabs to get there.

So the shortcut might be worthwhile to memorize, those are the same with the vendor center, or the search transactions and the help. And then we’ve got transactional shortcuts to save and close Save and New, I feel like those don’t save a whole lot of time than just clicking on the bottom of a form typically to finalize it. But maybe they could save a little time.

And then the Save and Send and then you’ve got the exit trends, transaction and cancel, you can also put some calculations into a form which you might not realize until you actually test out some fields.

So sometimes it’s useful, instead of opening up a calculator, you can do the calculation within the form that you’re working on. You also have some date, quick shortcuts, these might save you a little time, they’re probably you may not remember them a lot unless you’re using these date ranges more often.

So you can type T for today. Yeah, why are you know, for the for the year so it can save you a little bit of typing there and the zoom, we’ve been using a not a lot holding down Ctrl and up on the scroll wheel of the mouse to be zooming in and out.

So let’s just take a look at a couple of those if I if I’m just going to pull this over here. And then if we go into our QuickBooks Notice if I hit the drop down, it seems to me that this arrow,

this plus arrow up top is fairly well positioned no matter where you are. In other words, if I was in another view like this, then I don’t have the plus is still, you know, fairly easy to find.

And even if I was to close the hamburger, then you have the plus up here. So it seems to me the shortcut doesn’t save you a whole lot of time with these standard forms.

Because the plus button is fairly easy to get to no matter what size the screen is, but it might save a little bit of time. And so the invoice we said was Ctrl,

Where did it go Ctrl, Alt R, I think I’m not clicked on my cell here. Ctrl Alt R. So there’s the receive payment, obviously, you have to be highlighted in the in the QuickBooks for the to work the estimate.

So let’s skip the estimate. Let’s go down to the lists Ctrl, Alt L, Control, Alt L is the lists that might be more useful if because it’s a quick way to get into the chart of accounts, which is a major list, although that’s not too difficult to get into. Because you can find it on the left hand side here under the accounting.

However, other you know, you might start thinking of things in terms of lists, especially if you’re used to the old desktop view. And that’s usually found under the cog up top. So you’ve got all of your lists here. That’s the other way you can kind of get there.

And then we’ve got our chart of accounts, that could be a useful tool because the chart of accounts is a little buried, although there’s only two tabs under here depends if you’re in the business view and or in the other view, but on the accountant view.

So let’s go back to the dashboard. And then the customers and vendor center is Ctrl, Alt C and Ctrl, Alt v as you would expect.

So Ctrl, Alt C, I think that’s a useful one. Because if you go into the sales tab, you won’t necessarily be in the customers, it’s two tabs deep. So that saves you a little bit of time to get into there. And you should be able to get in there quickly.

And then the search search Ctrl Alt F that could give you your recent transactions, that’s a useful tool. Because that you might have it’s kind of your default, because if you want to see, you know,

the recent transactions you’ve entered and search for those transactions, that could be a useful, useful thing to be pulling out from time to time as you’re working. And then Ctrl, Alt H Ctrl, Alt H for the help.

So hold on Ctrl, Alt H, it’s not getting there. Ctrl Alt H, I don’t know why I have the help button up top. So that’s the easy way to get into the Help button. But my Ctrl Alt H does not seem to be pulling it up.

I don’t know what’s going on, I’m gonna move on. And then you’ve got control all D the Save and Close kind of buttons and whatnot. So if I was in a form,

it’ll probably be down here the default. But maybe it’d be a little bit easier to hit the shortcut from time to time. If you want to exit the transaction CTRL ALT x could be a little bit faster possibly than just using that x arrow up top.

Now if I’m going into a form like an invoice and you were doing a calculation here, so say you were trying to figure out what the amount is, for example, or let’s say the rate then you might just start to type it if it was 10 times 50 And see not all feel old’s allow you to do it, but a lot of them will. So you can kind of experiment with that.

But the default, even for me still is to pull out a calculator. But a lot of times the form will allow you to do the calculation within the form. So you want to test that out, you can start to say,

might be a useful tool. So those are just a couple of shortcuts that might be worthwhile, I’m going to close want to leave without saving, yes, obviously, the Ctrl holding down control and zooming in and out is the other, another, you know, shortcut we’re going to use all the time.

And so that’s clearly one that we’ve been putting in place and that you want to have in mind. So let’s just check that out with the other view, card drop down the Business View. Now if I’m in the business view, the most of the stuff that is still in the plus tab up top is still right there easy to get to invoice, right checks expense for have received payment. But the lists and the lists are still up here. So they haven’t really changed for the all lists, your your accounts where to find the accounts could change a little bit.

So if you were trying, you can go into like the bookkeeping, and then you’ve got your chart of accounts is in here. That’s a little bit different location. And so again, you could under either view, use that,

that Ctrl Alt A to go to your chart of accounts that I think it’s a useful one, because this one under either view is a little bit more buried. Same with the Customer Center, which is Ctrl, Alt C.

So you’ll note that that takes me here under the get paid and pay area, it’s a little buried, especially under the business view, because there’s more tabs in here. So that might be useful to memorize CTRL ALT V is is the vendors down here.

So that’s under the get paid and pay area and the vendors that’s a little bit buried under this layout as well therefore easier to find. And Ctrl Alt F I think is good under either view to find these kinds of recent type of transactions.