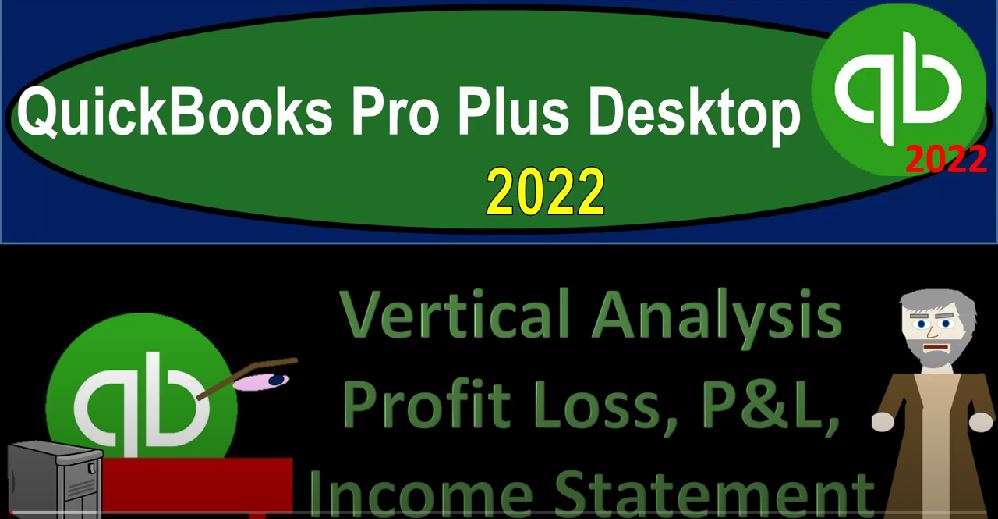 QuickBooks Pro Plus desktop 2022 vertical analysis profit loss P and L income statement and get ready because we bookkeeping pros are moving up the hilltop with QuickBooks Pro Plus desktop 2022. Here we are in our free QuickBooks sample file sample Rockcastle construction going through the setup process with a view drop down the open windows list left hand side company dropped down home page in the middle maximize on the home page. Starting off this time with another profit and loss P and L type of report reports drop down company and financial profit and loss standard report is our starting place.

Let’s increase the font for font sake, by going up to the customized reports up top fonts and numbers, we’re going to go to the change font area, bring that on up to 14 and I’m going to say okay, 14 on the font Yes, and apply it out. So now we would like to do a type of vertical analysis on the profit and loss. Typically the profit and loss vertical analysis will be different than what we had on the balance sheet. You’ll recall on the balance sheet, when we’re trying to compare each category you can evade imagine this unlike the asset side of things, we’re comparing each asset category to the total assets to see what our allocation of assets are per category.

So for example, that construction income total here is, well let’s take this this subcontractor income, this was 1546 1.25 divided by 5124 1.16. And moving the decimal two places over that would be the 30.2. About but then down below, you might think that these percentages should be a percent of the total cost of goods sold maybe or of the total expenses. But no, we’re comparing the expenses to what they are used for total revenue revenue generation. So you can tell by this item being the only one that’s at 100%. In other words, income divided by itself would be one or 100%. There is no other 100% on the statement, because we’re comparing everything to the goal of the statement that being the revenue generation.

If we have inventory type of transactions. This again, another kind of income statement, which is much more comparable when we’re trying to benchmark to other companies, usually companies that are larger than us. Therefore having larger numbers, larger income and expense numbers can’t compare our aggregate numbers to another business relative performance. What we can do is do a comparative type of vertical analysis and look at our performance in relation to to another type of business in that way meaning,

what is what is the other types of business cost of goods sold In comparison as a ratio to what they’re trying to do generate revenue, what is that percentage look like? How about the rest of their expenses in relation to basically the revenue generation? Are we in alignment proportionally to the same kind of structure? That’s the general idea. Let’s go through the formatting that we can typically do in this type of report now. So if I go back up top, we might want to change say, the profit and loss, let’s kind of change that to an income statement just to practice that change.

The date range is still applicable. But let’s change the dates up top, let’s make it for the first three months, a 101, let’s say 232, let’s say Oh, 330 123. So for the first three months there the first quarter, then we’ll make any negative numbers, I’m going to make negative numbers of bracketed bracketed on the negatives. I don’t think we have any, but we’ll do it anyways. And then we’ll get rid of these items, that timestamp, and so on, on the left hand side, and we’ll remove the pennies. Let’s do that by customizing the report up top, we’re going to go to the headers and the footers.

And I’m going to change it from an income statement. Two, what am I want to call it, I want to call it a vertical. And now this income statement, that sounds way more fancy. So there we got that, and then January through March, that’s looks good. We don’t need the date, time or report basis on the left hand side, we’ll just remove those altogether. We’ll put our name in the footer down below, Robert. There, we got that and then in the fonts and the numbers tab we’ve already increased font size. We’re going to put the parentheses around this.

Let’s make red numbers. Let’s go for for no pennies, no pennies, we want cents, but no pennies. Here we go. We’ll say okay. And there we have it looks way better, way better. And then once we have formatted something like this, we might want to put that as part of our normal kind of reports that we would be generating periodically, possibly monthly, possibly quarterly, possibly yearly, and then save it in our memorized reports categories will basically generate it again, when we think about the memorizing process next time and we’ll think about what kind of reports we might want to compile on a monthly, quarterly and or a yearly basis next time