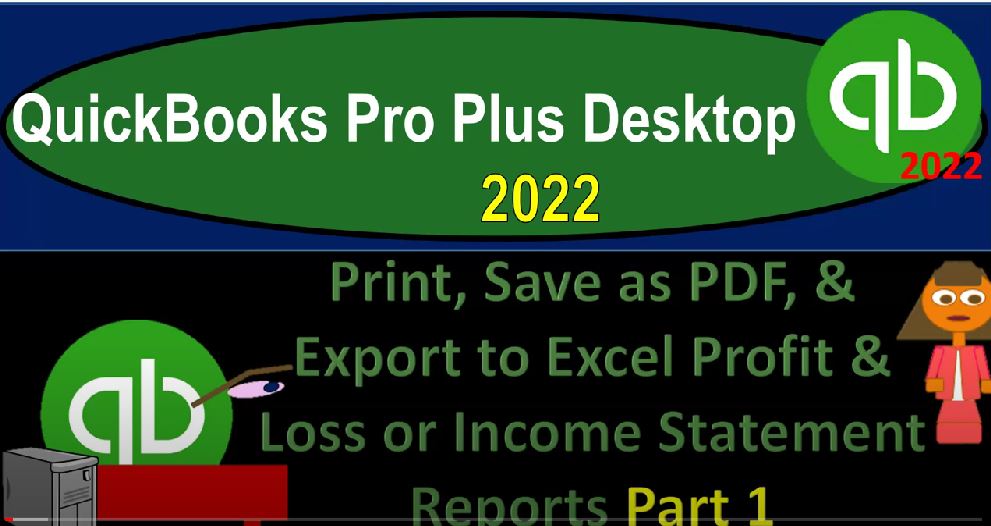 QuickBooks Pro Plus desktop 2020 to print Save as PDF and export to Excel profit and loss or income statement reports part number one, and get ready because we bookkeeping proved are moving up the hilltop with QuickBooks Pro desktop 2022. Here we are in our free QuickBooks sample file sample Rockcastle construction going through the setup process to view drop down open windows list left hand side company Drop Down Home Page middle area maximize on the home page to the gray area, we’re going to be saving some income statement or profit and loss type of reports.

Thinking about how we can group those reports format those reports keeping in mind what the end goal is to provide those reports typically to a supervisor and or a client. How can we do that as efficiently as possible? We thought about this when we printed out the balance sheet type reports in the prior section, setting up a folder that we’re going to put these reports into, we’re now going to be adding the income statement reports to them.

Okay, so if we minimize this item, going to the desktop, then we’ve created this folder where we’re going to be saving the reports going into that folder, we then created our folder where we’re going to save these reports, you might then organize these by clients, if you were a client situation, possibly then by date or by year, and then possibly by the information in that year.

Also having maybe a separate folder for permanent type of files, things that are not going to be changing on a yearly basis. I’m going to record this report folder as reports for the first part first part of this course, which is a navigation part as opposed to the second part, which we’re going to be creating a new company file if I go into this folder last time with the balance sheet reports, we created the reports themselves and we put them into basically a folder. But that folder we couldn’t attach.

This allows us then to have multiple different files that we could attach to an email. But we’d like to possibly make it a little bit easier on the recipient, possibly by zipping them attaching a zipped file could be a little bit easier. Or we can get them all on one report with the Help and Use of putting them in Excel using a cute PDF printer or some PDF printer to create one PDF file with all the reports on it. So we’ll do the same kind of process updating this report. And then adding our reports to this file, creating a new zip file for the PnL reports.

But this could give us an idea that for the month end clients, for example, we want to print these reports simply change the date range of them, and then we can format them in this order, and then give them to our clients. And that way, we ended off last time with the balance sheet reports that stopped off down here on the balance sheets down to seven, eight. So now we’re on number nine, which is our first income statement reports. I’m going to run that report.

And then we’re just going to start off saving these reports as the PDF files, we could do that two ways. One, we can hit the print button down here, we could save as a PDF or we can print it and use the CutePDF printer to save it. Our other option to give this to a supervisor or client would be to email it directly from here. This not being optimal. If you have multiple reports that you probably would want to group together, attach them in such a way that you can organize them nicely to provide them to the client or supervisor.

And then we have the export which we’ll talk about most likely in a future presentation. That option being nice that we can then export to Excel. use Excel to put everything on one PDF file, which can make it look a little bit nicer as well. Let’s first look at our printing option here we’re going to print the report or save it as a PDF PDF.

So now we can go to the next one, go into the reports on the left hand side, we’re now looking at number 10, which is a little out of order. But it still works, it still works. Here’s the number 10 folder. Notice that we could format if you want to need it to have the formatting, you could go to the report, or the print and then the reports, you have your formatting options, including the margins and the settings, then I could print it to the cute PDF printer, which is another format of printing the document,

we can change the settings this way to portfolio or landscape, we can use the Smart page fit items down below. And then if I needed to print it by using the cute PDF printer, I can then print it in this format and create in essence a PDF using the printing option or printing function. So that way, I could say okay, let’s check it out. There it is, it’s going here. I’m gonna put it into this report. This is number 1am. i On number 10. Number 10 is going to be income state meant summary by month report.

So we have that one saving that one. Let’s see what else we have. We’re on number 11, Report Center number 11. Run it, check it out. And so we’ll run this one, let’s just save it as is. So this is the comparative report. Okay. So I’m going to say let’s go to the Print option. Let’s just save this one. And I’m going to call this one, number two, number 11. Because that’s what we’re on number 11, comparative income statement, income statement, I put that in there twice, summary summary in there, I’m going to save that I should change the title here to fix that.

But I’m not going to do that now. And so we’re going to go then back to the reports. Again, look at number 1111. On the reports, save that one printed out, save it as a PDF. I’m going to position it right under the title there. So I could copy the title hopefully properly, but possibly not income state meant vertical analysis. Now assists report, this is number 12, by the way, so that it will order in numerical format here, which actually does it properly, unlike QuickBooks did save in it. And then we’re going to go back to the reports again, on the left hand side, raw number 13.

We’re almost there number 13. And we’re then going to say let’s print that one again, save it as a P, D, F, organizing it so we can then copy the name, this is going to be number 14, this number 13. Number 13. And comes statement by month statement by month report. Save it and that I think we got one more. And that’s it, I’m pretty sure. Number 14. Let’s do that one. Print that one out report. Hold on a second, print it out, save it as position in typing. Number 14.

Compare it to income meant saving that one there. There it is. So then if I go back to what we have saved thus far, now we could say okay, now I’ve got all of these reports that are here. If I go to the View up top and say I want to see them extra large just to emphasize the fact that there’s a lot of them here. If I attached all these on one attachment, it would be quite overwhelming. numbering them is kind of nice. That’s not often done, but it’s kind of nice because then when they do put it download them and put them into their folder, they can at least see the format or the ordering that we think might be appropriate for them to look at it in.

So that’s nice, but still you probably want to zip it. So I’m going to go back on over here and say I can’t attach the folder to say an email I can attach The zipped item to an email, what I’m going to do is delete this zipped file because I have changed it now and zip this file right clicking on it to do so, go into the Send To item and we want to compress it, not simply to compress it, because that is nice too, because it’s more likely to fit in an email when compressed.

But also, because we can attach a zipped file, meaning attaching one file, which is nice, however, not perfect, because then they still have to open the zip file, uncompress it, take the forms out of it, save it somewhere else, and so on. If they’re going to actually look at it, it would be nice, if they could just double click on it right out of the email, open up one file.

That’s what we’ll work on next time with the exporting feature to Excel using the cute PDF printer then to take that and put all of our reports on one PDF, having one long PDF that we can then provide. If we go back to QuickBooks, we will do that by going to each of these reports again and exporting them to excel This time. We’ll have a new worksheet, but we will be sending them to the same workbook that we had created in a prior presentation of thusly second workbook. So we’ll go through that process next time.