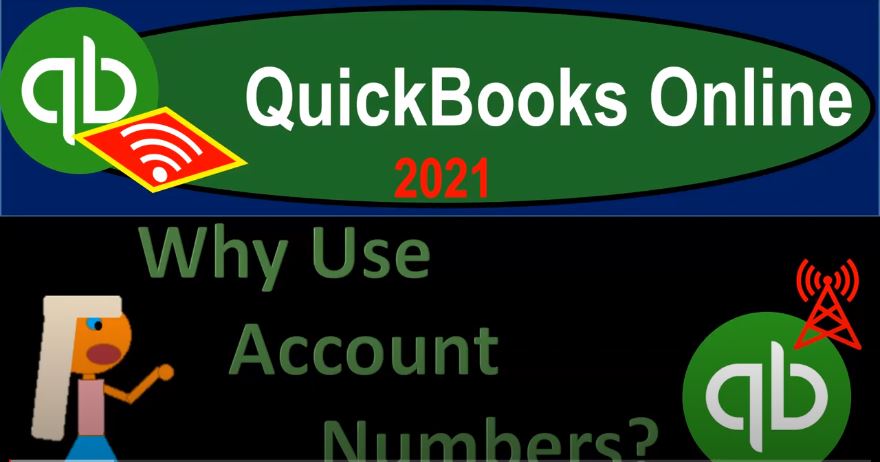 QuickBooks Online 2021. Now, why use account numbers? Let’s get into it with Intuit QuickBooks Online 2021. Why use account numbers? The primary reason is because you will generally have more control over the order of the accounts the order of the accounts that will be found on the chart of accounts on the trial balance on other types of reports, including the major financial reports the balance sheet and the income statement.

With that added level of control however, you have a little bit added more burden that you have to be careful of as you add the account numbers as you add new accounts to do so in such a way that it won’t cause you problems in the future when you want to add further accounts into the future. And that’s what we’ll be discussing when we add new accounts.

Also note, when we have more control over the accounts ordering with the account numbers, it doesn’t really mean that we have complete control or that we would even want complete control meaning the primary ordering of the accounts will be in accordance with basically the double entry accounting system assets liabilities equity than income and expense accounts. And then within those categories. That’s where we have the ordering of accounts with account numbers being helpful to give us some more control.

And for example, when we talked about the expense accounts, we can then have a little bit more control over the order of the accounts and expense accounts, which usually are long category of accounts, rather than them just being in alphabetical order. This is also useful if we work outside of QuickBooks and come back into QuickBooks, and so on. Because if you add account, if you add another account, it’s going to shuffle in accordance with with the ordering of the accounts in alphabetical order. For example, if you don’t use account numbers, if you do use account numbers, you’ll have a bit more control.

When you’re going back and forth within QuickBooks and outside of QuickBooks, for example, you also may have faster data input. So as you do the data input, for example, injury checks or entering Expense Type forms. When you enter the expense accounts, you may have a better idea of what the numbers are meaning you start to kind of visualize at least what the groupings of the numbers are. Some people actually are very good at actually memorizing the number. And it can be a lot easier if you just know that number to type in the number.

But even if you’re not that good, you can’t remember the number of all the expense accounts, the grouping of the types of accounts should be by number or the the number range will give you a idea of which accounts will be there. And therefore when you’re looking for something, you can kind of get an idea of it just by what the number starts with, even if you do not know the whole number. So it can actually increase the speed of your data input helps to visualize order of the chart of accounts.

So the fact that you can you can see, you’ll start to visualize when you do the data input, what the account numbers are related to certain groupings of accounts, once again, that can help you to kind of visualize the chart of accounts, the order of the accounts that should be there. And that will help you to basically do data input, just understand the financial statements in general, can make your end and tax financial work easier.

So oftentimes, when you do the year end kind of reports, you’re going to provide a report possibly to an accountant, or possibly you will export information from QuickBooks, possibly an income statement and a balance sheet or a trial balance to excel. And then think about tax adjustments that might be needed to be done, possibly in a worksheet in Excel or something like that. And if you add accounts to it, and you want to then put that back into the QuickBooks system, account numbers can be a little bit easier to do that with, because that allows you to add accounts that are going to be ordered by basically the account number that you will be putting in there instead of alphabetical order.

So when you’re jumping back in the QuickBooks system to outside of the QuickBooks system, it’s easier to add accounts in either location, and not have it kind of mess up. You know, when you go from year to year, and you have new accounts that have been added, but they’re in different order, because of alphabetical order versus the use of the account numbers when doing so.

But just from the standpoint of if someone else was to look at your QuickBooks system, and you’re using account numbers, and you’re doing them properly, they’re probably going to say that maybe they’re a bit more sophisticated with the use of QuickBooks than otherwise would be.

So I’m going to say done here. And then if we go then down to our chart of accounts in the accounts down below, and scroll down here, now we’ve got our account numbers that we can then add. Now as we add the account numbers, I will talk more about just basically the normal order of the accounts, the accounts will typically be an order by type, you can see this as the default. And that will basically mean that it’s an order of balance sheet on top of income statement, which means assets, liabilities and equity on top of then income and expense type of accounts.

So you can see all the cash accounts will start with like a one and all asset accounts, for example, starting with a one, but then you get into more detail bank account with a with a one zero accounts receivable a one one, and this is this is just one system that you can use, again, we’re using one system, the point is that you want to have a certain kind of grouping of your account numbers, that makes sense makes it easier to look at. And you can see just by having a one in this system, that it’s going to be some type of asset account, if it starts with a to some type of liability account starts with a three equity account.

That’s what we mean by it, helping you to kind of figure out the grouping of the accounts. If you just if you just look at one account that’s called like auto, and there’s an auto expense and an auto fixed asset account, then obviously, if it started with a six, then you could say, Oh, well, that’s the expense one. And if it started with a one, and then you can say, Oh, that’s the fixed asset. One, it can help you to kind of start to visualize where something lies, and then start to visualize basically your chart of accounts by the account numbers.

When you do the data input. I’ll just add one account number, just for example, down here, if we added a utility account number, and I say I’m just going to edit, edit this account, and just add an account number just for practice 6000. I think I’m gonna do five digit numbers. And we’ll change this later. But if I if I save that, and then we do say our data input.

So now I’m going to say that this account has the account number of 6000. It’s up here now utilities, and then and then I go in and I say okay, what if I was to add, say like an expense type of form, and do the data input for it. So the fact that it has the 6000 in it is something that can help me to search with. So if I, if I go here and I add the expense account of 6000, it’ll start to populate. And again, you might say, Well, I’m not going to memorize all the actual accounts.

But again, you could if you just put a six in here, then that’s going to help you just a group by expense that will help you to group all the expenses together because all the expenses start with a six. So if you’re having kind of some some confusion as to whether it’s an expense account, or an asset account, or something like that, the account numbers can make the data input then a little bit faster. So I’m going to close that out now. And we’re going to go back to the accounting and our chart of accounts. So we’re going to go back to then our chart of accounts.

And just also note that if you export this then to like a Excel worksheet or something like that, like a trial balance. And then you have like a tax preparer that often uses a worksheet, we may take a look at one, from the information from QuickBooks, if they make changes and add accounts, say expense accounts. For example, as they do their work doing adjustments for your in accounting adjustments or tax adjustments that you need to then put in your books.

So that when you put it back in your system, it’ll line up and that makes it a lot easier as well when you try to compare your books in the current year to the books in another year. And in the following year, you have more accounts, because you’ll be able to see the accounts that are missing a lot more easily if you have account numbers than if you’re trying to match two set of accounts up and you have new accounts but but the only difference is the the alphabetical order.

You’re gonna have to look for alphabetical order. If you’re trying to look for a new number in other words between two lists. is different, that’s easier than taking two lists and trying to find the account just by just by name. That is the difference between the two.