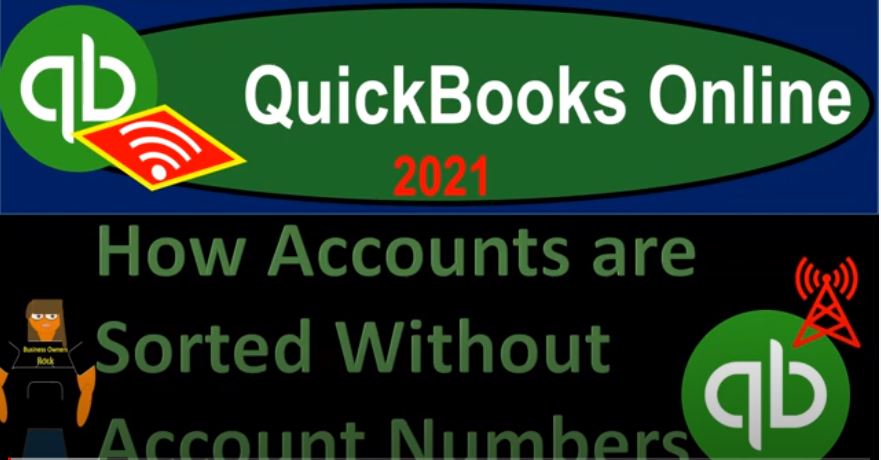 So first, you want to be thinking about the order of accounts. And you want to first think about the order of accounts by account type. And with regards to QuickBooks terminology, or you want to think about it in terms of basically the balance sheet on top of the income statement, that will be the case that will be the primary sorting of the chart of accounts, whether you have account numbers on or off, and then the account numbers can add some added level of sorting within that categorization. Now, note that the default here will be to sort by account type.

Now you might say, Well, yeah, but I can’t sort by name, I could sort by account number if I want to, and you could, but you want to kind of think about it in terms of the account type. There’s a reason it’s sorted by account type, because that’s how the financial statements are grouped balance sheet on top of the income statement. So although you can sort on the chart of accounts by account number or by name, that the chart of accounts, in practice will still be an order by basically account type, because they’re going to be used to create the financial statements, which are an order by account type, meaning balance sheet, and then the income statement.

So how you first want to think about it is balance sheet on top of the income statement, the balance sheet includes assets than liabilities, then the equity section, assets, liabilities, and then equity and then the income statement, which is income, and Expense Type of accounts. Then within those categories, we have more detailed categories, including cash, then accounts receivable, then other current assets, and so on. So let’s go through it and just add a couple of the of the gaps here. So we have an example of each kind of account type category.

Notice where it adds that right up on top, that’ll be our first account because not only is it cash, but it’s the most liquid account, then we’ll typically have an accounts receivable type of account. It has a separate type not for financial account accounting normally, but for QuickBooks, it does because it has an added level of functionality necessary to create sub ledgers for it meaning reports that are grouped by customer.

And you might have an allowance account as well. So notice it’s right underneath the cache, because it’s a little less liquid, but still up top, and then we’ve got the inventory. This is an other current assets type of account kind of a special other current asset, because we’re tracking, you know, our inventory items, we might have something like pre payments up top like prepaid insurance, let’s just add one of those just for just for the fun of it, we’re gonna say we might have a prepaid type of asset that’s going to be an other current asset type of account. And I’m going to call it a prepayment of some kind.

So we’re going to say this is a crude or prepaid, so we’ll say prepaid expense here, and I’m going to say okay, prepaid expense. And so now we’ve got the prepayment. Notice that that the inventory items here are in order, we’re in order by type other current assets. So inventory is going to be before the prepaid because now we’re talking in the same category it being ordered in alphabetical order within the category. In other words, note that the accounts receivable is not above the checking account.

So let’s go up top again, let’s add another one and say let’s add than an other asset not not as often use, and we’re just gonna say that the other asset acute, let’s say goodwill, and we’ll say, save it. So it’s not a current asset. But now in other asset down here, under the fixed assets, then let’s add some liability type of accounts. So I’m going to go liability type of account. second category on the income statement, in general, the big categories. Now, the current liability, or the big liability account is accounts payable. So we’ll say accounts payable, it is a current liability, but like accounts receivable, it has like a special need within QuickBooks to have a sub ledger, therefore, it’s got its own categorization.

So now we got the income statement below that income type of accounts sales being one of the common income statement, if you sell inventory items, or sale of product income, sale of product income here, I’m not sure why we need multiple accounts for that. If you do have multiple accounts, you could say I want to I want to remove some of those accounts, maybe I don’t need to sell a product accounts. So you might go back on over here and say make inactive so I’m going to make it inactive and say okay, so now we’re going to go down and say we got an income account.

So we’ve got billable income, I’m maybe I don’t need this billable item either. I’m gonna say let’s make that inactive. I would scroll back down and say another billable item we’re gonna say make that inactive. Make it inactive. And then now we’ve got the sales and sale of product income. We got the uncategorized income that’s kind of their default item cost of goods sold is going to be the next category. This is basically an expense but it’s going to be First before all other expenses, because that’s the expense related to a selling inventory.

And then we have all the expenses down below. Now the expenses are the longest category of types of things that we typically will have. And this is where the account numbers have a lot of control on the expense categorization because within this category, you can order it by account number as we can see up top. And that’ll, that can give us a lot more control over that long, you know, grouping of accounts, which all have the same account type. Let’s go ahead and just add a couple things to our numbers. Now let’s add some data.

So if I were in the chart of accounts now, so I went into the chart of accounts, I’m going to add a deposit. So we’re just going to add some numbers into it as of Oh 101. to zero, we’ll add a deposit. And I’m just going to do this fairly quickly, just so we have some numbers that we can sort in the report. So I’m going to say that deposits 100,000. Other side, I’m going to put into the equity account, which is a balance sheet type account, I’m basically making then our our income statements, I’m going to call this owner’s equity, so the owner’s equity account. So let’s add that that’ll increase the cash and increase the equity. Now let’s add some Expense Type forms. And this will be decreases to the checking account. So I’ll make this on on January 5.

Let’s say that that’s going to be for 800 saving that we’re in the negative now here so I’m going to say next item on the rental. So let’s say rental repairs and maintenance taxes and licensees I’m gonna say that’s gonna be that and we’ll save that and then we’ve got taxes and license and uncategorized Okay, there we have it now on the accounts receivable, we might make an invoice to hit that inventory assets. We could we could add that but let’s add that directly. Now normally you would if you’re tracking this within the system You would be using an inventory account and using a perpetual inventory system, but I’m just going to add this for now. Inventory.

And then let’s see what else we can just populate our accounts here. We got inventory prepaid, let’s do the prepaid items 12,000. All right. And then what else do we have here, we got prepaid uncategorized, undeposited, accumulated amortization, the fixed asset, let’s say the furniture and fixture, let’s say that is 18,000. That’s the fixed asset account. And then we’ve got furniture goodwill, let’s add that at, let’s say that’s 20,000. goodwill, that probably wouldn’t come out of the checking account here, maybe, but anyways, goodwill, and then accounts payable, sales tax payable, sales tax payable, let’s just add that here. To put it on the books.

This will generally come from an invoice or sales receipt, but we’ll put it on the books just to have something in there. On the sales tax. note payable, let’s put that on the books. The note payable should be going the other way, I’m going to cancel this, I’m going to say that this is going to be a deposit. This time for a note payable, let’s make that for 150,000. And this is going to be notes payable notes payable. So we’ll save that. So there we have that, I’m also going to add an invoice in a bill to populate account the accounts receivable and accounts payable.

And we’ll just basically open it up our reports now so that we just have some numbers in it, looking at the major reports, balance sheet income statement, and then possibly the trial balances the other report that I think Think is useful to look at. Let’s actually start with that one. Well, let’s start with the balance sheet on the first tab here, I’ll go to the to the reports on the left hand side, we’ll open up the good old balance sheet, it should be up here in the favorite reports. So we’ll open up the balance sheet report, changing the dates up top from a 10120 to 1231 to zero, run that report, close the hamburger.

This is a less less common report used often by accountants, but it really gives you an idea of the ordering of the accounts, it’ll look a lot like the chart of accounts, same date range up top, oh 101 to zero to 1231 to zero, run that report, closing the hamburger. Now you want to think about this balance sheet on top of the income statement. So if I look at the balance sheet, here we have it and notice every little drop down category that is is based on these drop downs.

Then we have the income statement, income statement includes income, and then the expense categories. Now Cost of Goods Sold would be one of the major expenses, we didn’t add a cost of goods sold yet. So we should have we should put one there but cost of goods sold. And then all other expenses usually be in the long category. This is where you have a lot of control with the account numbers.

And then if you go to the chart of account to the trial balance, you can see this gets rid of all the subtotals and if you can understand this report, it’s a lot easier to look at where you have the balance sheet assets and then liabilities and then equity on top of the income statement, income and expense in the same report.