This presentation we will record an advanced payment or a customer deposit. In other words, we’re going to receive a deposit in advance for a guitar that we’re going to provide in the future. Let’s get into it with intuits QuickBooks Online. Here we are in our get great guitars file. Let’s first take a look at a flowchart. I won’t spend as much time on it because we seen it in the past what we really want to do here is put that negative receivable on the books which will be dealing with in our adjusting entry process later. The process here note that the normal accounts receivable processes to have an invoice and then we’d receive the payment then we make the deposit here we’re going to say someone came into our shops as they want a guitar.

We can’t give it to them at this point in time, but we will hold on to it for them. If you give us a down payment to show commitment that you’re committed to the sale. Therefore we’re going to record that receive payment before the Create invoice and you can see the arrows going like from left to right and we’re just basically doing it from like right to left which is the opposite of what we would typically do. So that’s going to be unusual in that we’re going to basically have a negative receivable, we’re not going to be recording the liability we want the negative receivable because logistically, that’s going to be easier for us to work with it will create a timing difference, however, where our financial statements aren’t technically like correct on an accrual basis, and what we’ll do it an adjusting entry to reflect that at the end of the month in the you know, another section of our course.

So I’m going to say 21st here for the date. And note there’s no there’s no invoice down here like typically is the case usually there’s an invoice and we check off the invoice and that would be the matching the amount that would be paid. But this time, we’re just going to put the payment even though there is no invoice that will create basically what they call a credit for, you know an overpayment that we need to apply out for this particular customer. So I’m going to say Save and Close and it’s going to give us this thing it says you didn’t select an invoice will save this payment as a credit to your customer. So that means that the next invoice will make will basically apply out that credit. That’s what we want to do. 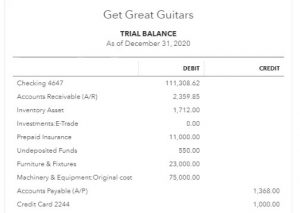 So it looks fine here. But if we then go to the detailed report if I go back to the trial balance, because because you’ll note the AR is still positive, so it’s not like it made the accounts receivable negative. But if I go to the detailed report then and I closed the hamburger here and I scroll down to the bottom to string music, and I see this customers saying is there’s negative accounts receivable that doesn’t make sense negative accounts receivable? Why? How can an account accounts receivable means people owe us money? How can it be negative that would mean we owe somebody else money, which we do, because they gave us a deposit and either we owe them the deposit back or we owe them a guitar therefore it’s a liability at this point really, which really should be in some kind of liability like unearned revenue, or deposit or something like that.

Now what happens when we run the report at the end of the time period, and we want to make our financial statements correct on a on an accrual basis, well, then if we still have these negative receivable in there at that time, if it hasn’t cleared out, if we haven’t gotten the invoice at that point in time, we’ll just simply make an adjusting entry for it. And we’ll see that in the adjusting entry process when we do the adjusting entries, in other words, will increase the accounts receivable by that 300 will increase the liability by 300. And then we’ll simply reverse that right afterwards so that we can be correct as of the end of the finance as the cutoff date as the report dates for adjusting entries. And we can still use this logistically useful tool of tracking this information in the accounts receivable and by customer