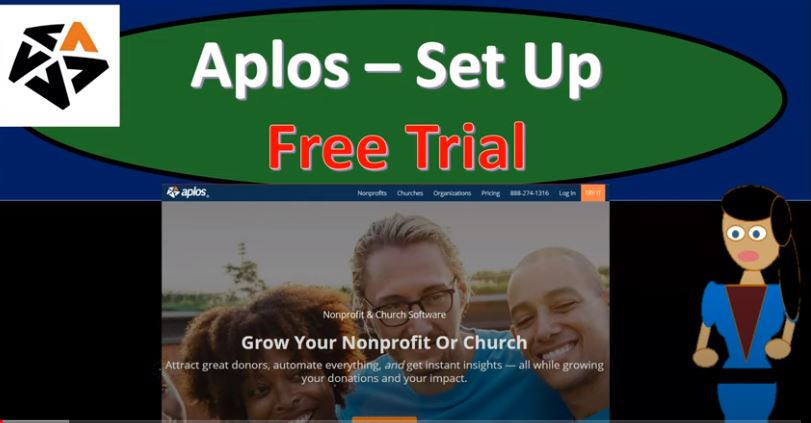 In this presentation, we’re going to take a look at the setup process for the free trial of aplos. aplos is an accounting software that’s designed specifically for not for profit organizations they typically have and at this time do have a free trial component for it, which is a great tool to get used to the software and go through a practice problem as we will do here. Get ready, because here we go with aplos.

Here we are on the app loads homepage, that’s a p l Oh s.com. That’s going to be a p l o s.com. We’re going to be taking a look at the pricing. Let’s first go to the pricing, we’re going to be picking up course the free trial here for our practice problem. But let’s take a look at the pricing options. So obviously, here we have the free trial, that’s what we will be trying here, they have these slashed out $59 down to the 2950. So 2950 a month. If we compare that to another common accounting software that’s kind of in a similar kind of area, let’s such as a QuickBooks Online.

So this one that’s recommended is probably the one that would be necessary for the not for profit organization. And most businesses, frankly, as well. So that’s why it’s the most popular one. And then if we go over to the app, Lowe’s, we’ve got the 2950, so it kind of a comparable price. Now another difference between the two. Just note however, of course, that QuickBooks is going to be a lot larger of a company that’s owned by Intuit, which is a large company, a lot of people use QuickBooks, so you’re probably going to have a lot of, you know, General resources like YouTube channel type resources, and other people that use QuickBooks. However, QuickBooks doesn’t specialize just in a not for profit.

So you could use things like the class tracking feature to be to use things that would gear towards like more of a not for profit, but obviously the software itself is to is geared towards, you know, General type of accounting, whereas obviously, the aplos here is designed specifically for the not for profit types of organizations. So when you when you do find resources, of course, for the aplos, they’re going to be less easy to find, because it’s not as widespread of a software. But when you do find those resources and talk to people about the use of aplos, you know, you’re talking to someone who’s going to be geared towards using a not for profit type of system.

Whereas if you talk to people that use QuickBooks, many people use QuickBooks and may not even know some of its features that you may need to try to run the QuickBooks file in like a not for profit type of format, like class tracking, or jobs that could be useful for that, they might not know that. So when you look at all the resources, there’s a lot of resources, in other words for QuickBooks out there, but if you’re trying to find something specific, not for profit, and sorting through all of that can be a little bit difficult. Whereas Of course, there’s not going to be as many resources out there in general, for something like an aplos. But the resources you do find are obviously going to be within your industry, which is going to be a not for profit type of industry, because that’s their focus. So just some kind of pros and cons on that. So you got the price comparison, and just some pros and cons with a common other software such as QuickBooks Online, we’re gonna, of course be taking a look at the free trial.

So need any advanced features, department projects, or location budgeting, fixed assets, and I’m gonna say No thanks. And these would be kind of like the upsell type of features, you would think things that might cost more money for the advanced features. So then let’s say Let’s go, we didn’t get the informational email here, thank you for looking into aplos. And welcome to the platform, you’ve already made a wide decision to creating a free trial. So to ensure that you continue traveling down the appropriate path, we have some spectacular resources available to help you get started in the system, view the Getting Started checklist to learn more about where to begin with the setup.

So you have the getting started, I’m not going to go into that now. But you can use that checklist, sign up for the 30 minute tour that provides an overview of the aplos systems. So you got the tour that they can provide, we have different software plans, depending on how many users need access to the system, and how many contacts you’ll need to track. So the users, if you need more users that are going to be logged into the system and entering data and whatnot, then that could be one of the things that are going to you know, cause the price to go up and down and whatnot, do you plans and prices for our subscription page plans and pricings and then that’s going to be it so I’m gonna close this back up closing this back out.

Now we have our if we select our dashboard up top and we’ll basically be in our dashboard or kind of like our homepage of our our interface here. So we have a not for profit organization. That’s what we named the organization, we have some of the general information up top and then often a lot of things that we’re we will be going into will be from the dashboard up top the people the groups, the donation, the market, the the fund accounting reports, and so on and so forth. And then we got the plus button, add contact, add communication, add note, remember pledge and contribution. So that’s going to be our major navigation tools as we move forward. So that’s it. We’re set up, we’re up and running. Now we’ve got our we’ve got our application, we’re going to start to look at the data input to it in future presentations. That’s it for now. Let’s get out of here.