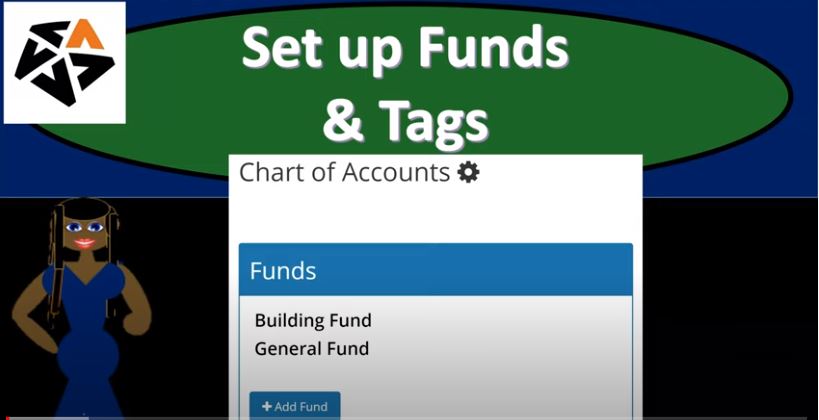 So we’ve got our funds that we’re going to be setting up now if we go over to our Excel files, just take a look at so we’ll look at Excel to get an idea of what our objective will be, we’re going to be up top. So I’m in cell, oh 202, we’re looking at our trial balance. Now note within the trial balance, we only have really one column. That’s a typical kind of chart of accounts. So if we’re thinking about the chart of accounts, we’re going to have to break out from the categories, they’re going to be restricted and unrestricted. And we can only do that with basically two separate accounts that would say, Hey, here’s restricted and unrestricted.

However, when we pull that information over to a to a report, then we can have something like our statement of activities, which is similar to the balance sheet down here, which is going to be without donor restrictions and with donor restriction. So now we have that same contributions account, that’s basically breaking out to the contributions without restrictions and with restrictions. And then we could further break that information out. But let’s start here. So that’s how can we do that within the system to make that easier to do rather than having? We don’t even really need possibly the two accounts to do that.

But in any case, how can we break this out, so it’ll then I have these two columns, that’s what we’re gonna use, we’re gonna use the funds to do this breakout feature. Now also note, when you look at the the net income for the restricted and an unrestricted or in this case, the increase in net assets, the same thing as net income, are basically an income statement it needs to roll into then the balance sheet or the statement of financial position. And the statement of financial position then is going to those two restricted items are going to relate to the items in what would be like the equity section of a net assets section of what would be like the balance sheet of a statement of financial position, where we will have with donor restrictions and without doing restrictions.

So note that in a for profit organization, just normal accounting, you’re gonna have to rollover the the net income into like a retained earnings or capital account. And there’s always a problem, or there could be like a wrinkle with the retained earnings or equity as a whole, it’s all the same, the net income rolls into basically the equity section of the net assets section. But if it’s a partnership, you got two partners, and you got to deal with the breakout of the two partners in their capital accounts. If it’s a corporation that you got retained earnings, and then you got the investment, which is like common stock, in a not for profit, you’ve got the items that are restricted and not restricted. So that’s kind of our added wrinkle of the detail when we when we do that closing process within the not for profit organization.

Now let’s go back on over. So what we’re going to do then is is we’re going to set up these two funds, and I’m just going to read rename them as restricted and unrestricted. So I’m going to say maybe the first one I’ll put on, restricted, on restricted, like that, and you can actually color these, which is kind of neat. So I’m gonna, I’m gonna color code them. And that could really make things a little bit easier, actually. So if I select this little item up top, that I can make it something like green. So I’ll say unrestricted, I’ll make it some kind of some type of green here. Just keep it at that. And you can, you can then change the tone of it.

Yeah, something like that. I’ll keep it here. And so then I’m going to say Save, and then maybe it should be a little darker. Let’s make it a little darker. I know I want people to be able to see it here. So let’s make this a little bit darker. That’s too dark. Good. All right, let’s see. Let’s try that we’re gonna say save. And that’s really dark. Let’s do it one more time. We’re gonna bring this back up. Make it like right there. And then save. Alright, that’s good. And then I’m gonna go to the other one, the general and I’m gonna say this is going to be a restricted, restricted. And then I’m going to hit the little color item and I’ll make that red to indicate that it’s restricted. And let’s just keep it there. I’m going to say save. Alright, restricted. So that looks good.

Now you’ll actually see a change down here in the chart of accounts now so if I take a look at the assets, so the assets the balance sheet accounts, you’re not going to see the difference if we go to the liabilities accounts, again, balance sheet account equity, however, now we have the unrestricted And the restricted categorization. Jumping back over to Excel here to see our net asset accounts, we have the net assets without donor restrictions and net assets with donor restrictions, I’m going to shorten up the name and just call it net assets restricted and unrestricted. So I’m going to go back on over here, and we have these sub categories, I’m just gonna have one sub category, what I’d like to say is okay, I’m going to actually rename this sub category.

So the way we have it set up, now we’re going to actually have to two columns to two rows here contributions restricted and unrestricted, which will also be broken out by column. So it so if you wanted to, to then put them together, you may be able to do that with it with a sub account kind of setup. So we’re going to keep the two here at this point. So I’m going to save that. So those are our major income account. Now, that’s going to be the contributions restricted the contribution to unrestricted, and then we have the earnings down here. So we have the earnings, I’m going to leave that as is, and then we’re probably not even going to be using that account.

So there’s the unrestricted, and you can imagine what’s going to happen here when we when we allocate to the expenses, these accounts now are allocated to the funds. So this will allow the system then to roll over the net income, which has now been assigned to restricted and unrestricted to the proper equity account to the proper equity account here, unrestricted equity. And that’s a really good feature that’s difficult to do in other software. Like you usually have to make an agenda to use like a QuickBooks or something. Then you can use the class feature which would break out these expenses in a similar fashion.

But it doesn’t, as far as I know, doesn’t have your system that will roll out to its own equity account that we have here and properly, roll that out. So this is going to be a nice system to use, it’ll be nice for the closing process, to have that to have that linked up here. Alright, so then we’re going to go to the accounting up top, once again, accounting tab, we’re going to go back into the accounting drop down. Now we want to look at the tags. So I’m going to look then at the tags. And I want what we want to do now is breakout, you’ll note over here, if we go back to excel, these are our two major categories that I want to be able to have a report to show people just this breakout of these two categories.

Then I want to go into more detailed with the unrestricted, I’m mainly worried about the expenses that I got to break out by program, I got to break them out by program, education, community service, and then general and admin, and fundraising. So I’ve got to break those out. And I want to be able to show that, but I don’t want to show it all on one giant report, I’d like to break it out in a separate report. So I’m gonna use tags to do that. And then we also have the kind of restricted items that we have. So might have, what are the restrictions, multiple different types of restrictions that we could have. So I want to show that in another report as well.

And I’m actually going to put the percentage of the breakout there because that might help us with a data input. So that’s going to be 40%. These would have to be determined by the organization. And we’ll talk more about how that how that will be broken out at a later time, make this a sub tab. Now we might experiment with the sub tab at a later time because we could break out programs and then put these tags into the program. So you can see a subtotal possibly of the programs versus non programs. But I’m going to keep this for now I’m going to say save that, there’s going to be our tag information. So now we’ve got our first tag, I’m going to add another tag. So we’ll select a little plus button again.

And I’m going to say this one was put after it was put 20% and then update that. And then we have the fundraising. Let’s do the same thing there, clicking on the fundraising, and going after the phone version and say 20%. And then we’ll save and update that. Okay, so there’s our tax. So now we, you can imagine a report here now, the report Basic Income Statement, Basic Income Statement breaking out then between the restricted and unrestricted. And now the unrestricted items. without restrictions, we can further break out with the use of tags, running a report, that’ll break that out by tags, that’s kind of what that’s what we’re imagining to happen here. Then we have the restricted items, which we could further break out as well.

Now, you can imagine the income statement now being broken out by the further reports with the use of the tax, I go to the accounting, and then tags and aplos. And that gives us our tax, which now will be supporting the restricted and unrestricted columns giving us the further detail of the the expenses, and then and then we’ll also get further detail of the projects. So we’ll see this all come together more when we start to make reports you’ll see it’s kind of more, we have to do more work on something like an Excel worksheet to make this happen. It’ll magically happen in the software a bit. But it’ll be easier to do the data input, we want to imagine what’s going to happen, be able to visualize what the links will be. And then we’ll be able to set this up and just the more you do the data input, it’ll be easier to kind of visualize what is happening. That’s gonna be it for now. Let’s get out of here.