So that’s going to be a one on one to zero to 1230 120. We’re going to go ahead and run that report. And then we’re going to go up top and duplicate it right click on the report up top, duplicate that report. And so there we have that. Now, our objective here is to finalize our bank reconciliation. So if I go back to the bank statement, I’m sorry, the balance sheet. And I’m looking at the checking account. Our goal was to reconcile this 90 484 12 with what’s on the bank statement as of the same time period, the end of January 31. 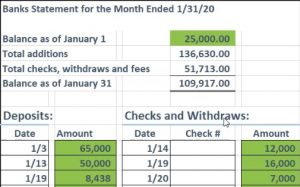 So that means we would think that that would be a timing difference, meaning, you know, it’s something that we’re right on, it’s correct that we put it in the books. It just hasn’t cleared the bank yet. Because because of a timing difference, and that’s if that’s exactly what the difference is, these deposits and checks that have not been checked off are exactly the difference between what’s on the bank and what’s on our books. So let’s go ahead and finish this. I’m going to say finish up top. Now note that if it wasn’t exactly zero, it would give you another little checkup box, and hey, you’re not exactly at zero, basically, I’m paraphrasing. And, and you could force it, you could say go ahead and reconcile anyways. And that’ll mean that QuickBooks will make a difference.

They’ll actually make a little account called reconciling difference or something like that, kind of like the opening balance equity. And that’s fine, but just recognize that your level of assurance just you know, goes way down, if there’s any if there’s any difference there. So you really want to be able to reconcile this. We have Of course, we have success, you reconciled your account. So we feel good about that. And then we can go ahead and view the report, I would go in and take a look at the actual reports here.

So here is our report. Now just note that that the bank reconciliation report that they generate is absurdly too low. And you know, we don’t need all this information really what we really want to see. So let me break down what we what we really need are the meat of this report, because what we really want to see those reconciling items. So then if I scroll down through this, we have the statement beginning balance, the statement beginning balance was the 25,000. that matches out to our balance here. So we have the bank beginning balance of the 25,000. Then we have the checks and payments that that went out. These are going to be the amount that were cleared. Those of course should tie out to the clear checks and payments here that’s going to be all these checks and payments which are going to tell total up to the 51 713.

So that’s the 51 713 that We have all the deposits that cleared. So these are the deposits that cleared over here, that’s going to be the 136 630. So there’s the 136 630. That gives us the statement, Indian balance the 109 917. There’s the 109 917. We already knew all that stuff. So we didn’t really need that much that all that detail, but they basically reconstructed the amounts that clear that we said cleared, and there are those item. Here’s what we really want. Here’s the bank statement balance. And here’s the unclear transactions as of January 31 2020. So these are the uncleared transactions. That’s the difference. That’s what we’re looking for. And then here’s the register balance as of January 31 2020, the 90 484. So this 15 or 3288 is really what we’re looking for.

Now what I want to see is more detail on this uncleared items. They also give you these uncleared transactions after January 31, which is just kind of pointless. We don’t really need this because this is information that we put into the system after the point that we have reconciled this at this time. Of course, they haven’t cleared if they’re in our system. We haven’t we haven’t done the reconciliation process. So this is kind of meaningless information. I’m looking for more details. On that 15,032 88, if you were to give this top portion to like an auditor or something like that it wouldn’t, wouldn’t give them much assurance because it’s this 1532 doesn’t have any detail to it.

So the details down here, we got the checks and cleared and payments cleared. That’s these items up here. But that doesn’t really help us because all of that is already on the bank statement. These are the clear checks. Here’s the deposits that have cleared again, all those are already on the bank statement. So that’s not really what we’re looking for. What we’re looking for, is the unclear checks. So here are the unclear checks. So this is part of the amount that’s making up that uncleared total. So these are the actual checks in our system that we have written that have not cleared. And again, if we have questions about those, we can check the next bank statement to see if they cleared in February, or February, which will do next time next reconciliation. And then here’s the deposit that was unclear So that’s really what we’re looking for.

If I was to take those two numbers, then the 1602 9.33 minus the 996, point four, five, that’s the 1532 88. And that’s going to give me the verification of this, this 1532 88. That’s the number we want. This is the detail of it down below, and then again, they give us after that they give us the uncleared deposits after January 31. After the date we reconciled, which is kind of pointless. I don’t I have no idea why but and then we give the uncleared checks as well. So again, very long kind of report, but it does have the information we need. And and so let’s go ahead and print it now.

So this is something you typically will do want to print because it’s not as easy to just generate the bank reconciliations as it is with other reports. So they’re typically things once you process them, you do want to print them and have kind of a hard copy or digit copier PDF copy in some format. So I’m going to go ahead and print it. So there it is, we’re going to be printing it to the cute PDF printer, I’m going to go ahead and say print on it. Okay, and then now it’s going somewhere, we’re going to tell it where to where we want to put it, I’m going to put it into the course data. 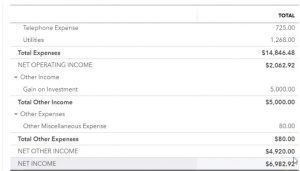 If they told us it was a draw, which we’ll do next time. It won’t show up here. It won’t, it won’t decrease the net income, but rather show up on the balance sheet. So it’ll show up in the equity section down here either as a decrease of the capital, or we may have an account called draws that would beakers