This presentation we will start a bank reconciliation for the second month of operations. This will be part one we’ll be focusing in on reconciling the deposits. Let’s get into it with Intuit QuickBooks Online. Now. Here we are in get great guitars file, we’re going to open up our reports. First, let’s go on down to the reports on the bottom left. And then we’re going to first open up the balance sheet report our favorite report opening up the balance sheet. We’re now considering the second month of operations, I’m going to change the dates up top those from a one a 120 to 1230 120.

We’re going to run that report. Notice here that the beginning number doesn’t really matter because it is the balance sheet that that means we’re focusing in on it doesn’t whether the beginning number was January or February, the end number as of a point in time, as of the end of February will be the same and obviously I put 1231 because there’s no data after February so the end number will be the same here. So it’s the 1055 7746 I’m going to make this a little bit larger. I’m going to duplicate our cell up top, I’m going to right click on the tab up top and duplicate it. And we’re going to go through our similar process as we did for the prior month, we are going to have our information here on the balance sheet, we’re going to be comparing that information to the bank statements. 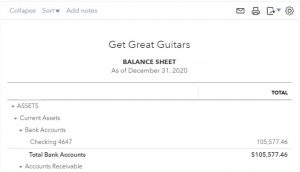 Does that number match the bank statement as of the end of February, if we go our bank statement and take a look at the end number as of that same date, it’s different, we got the 10518 1154. And over here we have the 10557 746. Now, you might say, hey, that’s pretty close, is that is that okay? But it’s still any kind of differences still going to be a problem because that difference can be a result of like 10 checks and, you know, five deposits or something like that. So any difference means that there’s something that there that we want to reconcile, we want account for that difference. And if we do so, we can have that assurance about the cash balance and therefore the assurance that that other cycles are correct or more assurance that they are correct as well.

You’ll recall last time we had outstanding items that didn’t yet clear, these are the items on our bank bank reconciliation for January, we had these items that we wrote in January, which weren’t on the January bank statement, because they didn’t get to the bank until February. So we would expect them to see these as part of the items that we’re going to clear in February, including this deposit which will take a look at this time, that 996 45 that we wrote in January 28. is now cleared in February, here it is in, in February.

So that’s going to be our process. Let’s then go back to our QuickBooks, let’s go back to the first tab, we’re going to I’m going to hold down Control, make this a bit smaller back down to 100% to not mess anything up, then we’re going to go down to the accounting down below. We will be then reconciling. So we’re going to reconcile that checking account that should kind of like be the default now go to 110 maybe, and now we have the beginning balance, which is the 109 917 that should be the beginning balance on our bank statement it pretty much has to be if we reconciled last time properly last time we reconciled to the 19917 therefore our beginning balance should be also 19917 are any balances going to be 1058 1154.

So I’m going to put that in here. 1058 11.54 I get that right 105 811 point five, four. Yes, I think that’s right. And then our ending date is going to be Oh to 29 to zero to 29 to zero, as, as we discussed last time, in January, I’m not going to be putting in the service charges or interest, because this kind of makes a journal entry that I that I don’t really see. And I can’t see that it checks it off as easily in the next screen, so I would rather just do that myself, I’d rather if I’m off by a service charge or interest, then I’ll simply record the transaction once I recognize that, so what I’ll do is I’m going to just go to the next screen here. So that’s okay, let’s start the reconciliation.

So then we’re going to go to the reconciliation screen, where we’re really focused in on this difference column, we want this difference column to go down to zero once it’s at zero. We’ll see these buttons up here. I think they turned green, and that’ll give us an indication that we’re good to go. So what we have here is this statement ending balance and then we have the cleared balance. And then we have the beginning balance here. And in the payments and deposits, you’ll recall down below that we can see all transactions, that’s the default, then we can focus in on that deposits. If we so choose the payments, if we so choose, that’s what I would recommend doing that typically makes it easier, there’s usually less deposits than payments. 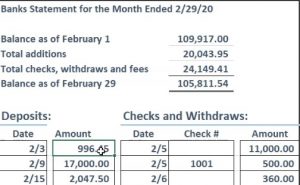 We’re looking for those outstanding items that are on the books and On the bank statement. Alright, so this first one, we got the 996 point five, four. So I’m going to go back over here. There’s the 996. point four, five, is that the right now? Yeah, that’s right. I just said it backwards. Alright. So there is that item. Note that this one was written in January. So it’s showing up here, even though it was written in January, because it was in January as bank reconciliation worksheet like this one, but we didn’t check it off because it didn’t clear the bank statement in January, and therefore it’s still on the book. So we’re going to clear it at this point in time.

So then I’m going to go back over here and say that let’s make that one green. I’m going to green that one that one’s been green to green today did and then we have the 17,000. So 17,000 there’s the 17,000. Looks good. Gonna go back to excel going to make that one green it I’m going to green it. And then we’re going to go to the two O’s for 715. So there’s the 204 750. That looks good. I’m gonna go back to excel and green it. Now again, you can go back and forth and do this you know a little bit, you know, Go from back and forth. But just if you get confused, then it’s it’s easier to think about going one way right from here to the books. Now, if we go back to the books, we’re going to say, all right, there’s one we didn’t check off here.

There’s the one that we didn’t, why didn’t we check that one off? That one’s not that one should be checked off. But it could be it’s on the books and not on the bank statement, that its outstanding in that the bank hadn’t yet cleared it yet. We wrote it on the 26, you would think that it would have cleared by the end of February, but maybe it just took a little longer to clear. And we can check that because note we’re reconciling as of February and but we must have the bank statement to do that. So it’s probably the date that we’re actually doing this work is probably sometime in March. And therefore we can we can jump on to the online checking account or whatnot, and see if this has cleared in March. If it has, then we’re okay.

We’re like that’s okay. It’s that we got the money. It’s just cleared in March, and therefore it’s just a reconciling item in February. Those are the things we’re looking for. order to reconcile. I’m going to continue on with this next time we’ll go to the check side of things, the longer side of things. And again, you can kind of remove yourself from the bank reconciliation halfway through it, go to lunch, do something else. It won’t delete the bank reconciliation. Hopefully, you know, I’m going to do it here and we’ll come back and hopefully it won’t do it. So I’m going to go back up top, I’m going to go to the dashboard. And then we’ll come back in less time next time and we’ll continue after the break.