First, I’m going to open up the balance sheet and report. We’re going to be changing the dates up top on that balance sheet report to let’s say the beginning date of a one on one to 020 229 to zero. Let’s do that one more time. Something happened oh to 29 to zero, and then I’m going to run that report. And there we have it. I’m going to close I’m going to duplicate the report, right click on the tab up top, duplicate that tab. Now recalling our process we have the checking account on This report at the window for 504. If we now go and if we now go to our bank statement, it’s at 105 811. So we had to make some adjustments. 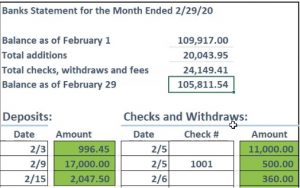 Notice the bank balance in our books is a little bit different now because we had to adjust for these items. However, it’s not the same, because we still have differences, those being the outstanding checks and the outstanding deposits. Let’s go ahead and finalize, then our bank reconciliation going back to the first tab, and then I’m going to hold down Control go down. Let’s bring it to 100%. It was already there before apparently. And then I’m going to go down to accounting. And we’re going to resume the reconciliation process, which was pretty much done last time, we just wanted to put off the actual clicking of the finish up button over here.

So we have now reconciled we have reconciled with this zero over here, indicating that there is no difference and that’s going to give us the green check. everything turns green and that it’s okay to go If you do have a difference here, remember, you can force the reconciliation, QuickBooks will then enter some type of journal entry in order to make the adjustment probably some account on the income statement called reconciling item reconciling expense, or income. And you can do that but you don’t want to because if this is even off by a little bit, it really lowers the effectiveness of the internal control of the bank reconciliation.

So you would be better off finding the item that is off, and then fixing it in one way or another adjusted adjusted so that you know, you know, you just at least know what the what the adjustment is, you can kind of point to and say that’s what it’s off by. Okay, so then you can, you’re going to go back up top, we’re going to finish this thing. We’re going to finish it and it says success, you reconciled your account, which is awfully exciting. And then we’re going to go to the View Report. You typically do want to view the report here because it’s not you know, going into this reconciliation reports a little bit different. You notice we don’t have the same options with other reports. Like the PDF, we can print it. And that’s about it.

We don’t like it, we’re not exporting it to excel. So you want to go in and print these out. If I hit the drop down, it does have these two reports here on the reconciliation thing. But I still recommend, you know, print out the bank reconciliations have them at a PDF, copy or hard copy. Now, again, this is going to be a long report, they give us way more information than we really need. But let’s just analyze this thing. We got the statement beginning balance at the 109 917. That of course, is on the statement here. So that was that the 109 917. We then have the checks and cleared amounts. So that’s going to be this amount, the 24 149.

So really, this whole, this whole top part, it really this like these last three numbers, that’s what matters. And again, this top four doesn’t help us too much. If you gave this to an auditor and said, Hey, this is my bank reconciliation, they’re going to say that’s nice, but this number doesn’t tell me anything. Right? What is that? What does that consist of? How can I verify that number? Well, for that, we go down below to the detail. And again, this first items here that cleared payments and and checks doesn’t, doesn’t help us too much. That’s going to be all this stuff. We already have that on the bank statement. And then if you go down here, we’ve got the deposits are cleared. And again, we already have that here that doesn’t that’s not you know that necessary, we don’t really need it. But then we have the unclear checks and payments, that’s what we’re looking for. That’s what we want to see.

So those are the ones that we wrote in February. But they’re not gonna, they’re not going to clear until March. This is what we really want, we want to be able to see these items. If we need to verify them again, we can go into March and see if they have cleared in March, see if they’re valid. And then we have the deposit that we wrote in February that has not yet cleared in February, it’s in our books as a February not going to clear possibly till March again, we can check that out. So those are the two numbers, we kind of need to see if I was to subtract those out 306 point two minus the 169 8.7575. That’s going to be that 13 that we’re looking for up here that’s going to be that 13 or that 130 745. That’s what we want to know. Let’s go ahead and print this thing out.

I’m going to go to the reports. And I want to go down to the P and L profit and loss because we already have the balance sheet open somewhere on the right. You can see it up there. So we’re going to open up the P and L I’m going to go back up top we’re going to be changing the dates up top from a 10120 to 1230 120 We’re going to run that report. Going to close the hamburger going to hold down Control, scroll up just a bit. And just note that we included Of course, some accounts down here, which included the repairs and maintenance. So we added the repairs and maintenance that was on the on the bank statement. So we had to add those to the system.

We also have the bank charges that we added, we added the bank service charges. And this time, they told us that that transfer wasn’t a missile, and this was from January, when there was a draw, the owner took money out, we put it in miscellaneous in January. This time it was we were told that it was a a draw for personal use. Therefore, the second month isn’t in here or else this would be 180. We only see the ad for the first month, the second month is going to the balance sheet. And if I go down to the balance sheet in the equity section, we then see now we have the capital account which is kind of like retained earnings and everything. rolls out into, we’ve got the owners investment, this is what the owner has put into the equity. And then we’ve got the owners pay and personal expenses. 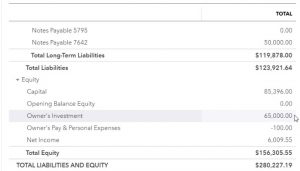 This is what came out of the owners of the owners equity doesn’t hit the income statement went directly into equity. And then we have the net income, which is the net income for the time period. So hopefully as time goes on, it’s good that the owners taking money out hopefully, the company is making money. And as it makes money, you’re going to see draws taking money out. This is often called draws withdrawals or something like that. So you would expect this to be happening as money being is being taken out. However, you want to make sure it’s not recorded on the income statement as an expense, it’s going to lower the net income if it is, and that’s not good. You know, that could cause problems for taxes because it’ll lower the taxes it’ll actually, you know, lower the taxes paid, but that’s not right. And you can cause problems with the IRS that way. So you want to hear on on the equity section. If It’s draw