In this presentation, we will continue on to part two of our bank reconciliation for the second month of operations, this time focusing on the decreases to the checks to the withdrawals from the bank account. Let’s get into it with Intuit QuickBooks Online. Here we are in our get great guitars file, we’re first going to be opening up some reports. So we’re going to go down to the reports on the bottom left, we’re going to be opening it up first, the balance sheet report, let’s open up the balance sheet report. And we’re going to be changing the dates up top. So I’m going to change the dates up top of the two months of operations that we’ve had thus far. That’s going to be a 1012020 229 to zero.

We’re going to go ahead and run that report. And I’m going to duplicate this report. I’m going to right click on the tab up top and duplicate it. I’m going to make this a little bit larger so we can see it recording our objective is going to be to be reconciling as of February 20. 99 the checking account the one to five 577 46, which is on our books to what is on the bank statement, which is 1058 1154. And we have started this reconciliation process, checking off the deposits in the reconciliation process. Now moving on to the checks, let’s go back on over to the QuickBooks, we’re going to go back to the first tab, hold down Control and scroll down a big back to that 100. 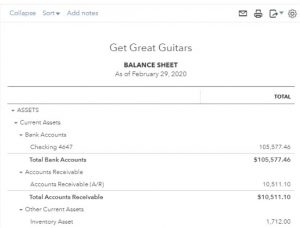 If you are dealing with checks between the date that we put the information in the system and the date they were deposited. And depending on the vendor, they could be, you know, different vendors will take a lot more lag to put that information into the system then others for dealing with electronic transfers, then it should be more straightforward. And there should be less lag on it. So you could try searching by check number, if you write a lot of checks, can be useful to write checks because the check numbers should then show up and you can sort by check numbers, if you so choose. Our strategy is always going to be to be going from the bank statement to the bank reconciliation. Why? Because if it’s on the bank statement, it should be on our books. If it’s not, we probably made a mistake.

We probably need to adjust something. If it’s on the books, but it’s not on the bank statement. It may be okay because it may be an outstanding item. Those are the things we’re looking for. Now also note that with these checks when we reconciled Last time, we had these checks these checks in our This is my bank reconciliation for January, these checks that were written in January, that didn’t clear in January, they weren’t on the January bank statement, we would expect to see them this time to clear on February, we would expect to see these in the February bank statement. Let’s see if that is indeed the case. We’re looking for that you know that 360, that 500, that’ll that 11,000.

So you know, there’s the 360, the 11,500 looks like those are clearing here. So let’s go. Let’s go through these we got the 11,000. I’m going to select this item I’m going to minimize and we’re going to go to the 11,000. Here it is their note again, it’s not in the same order, as it is on the bank statement. That’s okay. Also note that this one was written in January, so it was written in January didn’t clear this is when it was written. It didn’t clear the bank statement until February. And that’s why we had to that’s why we have to do this process. So So You know, it cleared in February, it didn’t clear in January. All right, next one’s going to be the 500. And then if we go back over, here’s the 500.

Now that one has an actual check number, so notice I’m kind of checking off by basically number, which can be a little risky, because you can light up the, you know, duplicate numbers, if you have another verification, such as the check number here, or sometimes if it’s electronic transfers, they’ll have the payee on the bank statement, which will give you another verification that you’re picking up the right number and not some other, you know, duplicated number. 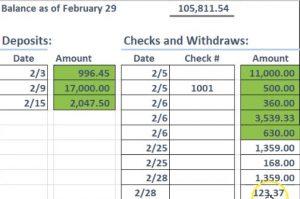 So either, if that’s the case, either there’s an amount that was on in our books, like one of these amounts on our books, possibly was input with the wrong number in it, right? Possibly, we put it into the data input with the wrong number in it, or it’s something that didn’t get input into the system at all. So one of those two are typically going to be the case. Now if we’re talking about if it was a check, then if we’re talking about these two as being checks, we can then go look at the clear We can actually get the clear checks and look at the actual cleared checks. And that could give us an idea of course of the vendor, and whether or not we have entered it into our system or not.

If it’s an electronic transfer, then like we say, we should be able to look into it and get more detail about the vendor because oftentimes, the bank will provide us more detail in terms of the transaction related to an electronic transfer, like a vendor name, or some type of number like that. Now, we also have these two amounts down here, the withdrawals and the bank charges, which of course aren’t on our system, and the withdrawals are going to be cast that was taken out, the bank charges are going to be the bank charges that we weren’t aware of.

So if I scroll through these, I’m looking for the equity we have capital. That’s the main equity we could put up there. We don’t want to put it into the opening balance equity, that’s not a use. That’s not what you usually use. It’s kind of a plug account. Owners investment that’s the money going in, and owners pay and personal expenses. So this sounds like the drawls account that they’re using. So we’re going to put it into the owners paint personally. expenses. Remember, the key is it’s an equity account, therefore not going to be on the income statement. So that’s what we’re going to use this time.

Last time, he said he used it for personal use. So we put it on miscellaneous expense, this time, we’re going to put it into this equity account. So I’m going to say Save and Close, or, or just save. And then we got one more for the bank fees. So the bank fees were this time this month, we’re $20. So I’m going to put $20 and that’s going to be the bank service charges, bank charges and fees, something like that. And then we’ll go ahead and save that one. All right. Now let’s go back to the bank reconciliation, see if we can wrap it up.

Now I’m going to see if I can find that 123 37 that we have added. So there it is 123 point three, seven, so we can green off this one. We’re going to green it, and then there’s the 830, the 830. There’s the 830 we’ve added now so that looks good. And I’m going to green that one off. And then we have the hundred down here, the 100 which we have added. There’s the 100. So we’ll green that one off. And there’s the 20. So there’s the 20. And so there we have that so you could you could see how this and that brings us back down to zero nice little green check that makes us feel secure.

Everything has been accomplished as it should have. And so that’s, you know, you could see how you’d basically need to fix anything. If it’s on the bank statement, not on our books, it’s probably not the case that those, you know, those checks were wrong. But it could give us an indication if you know, something happened, like a charge that we didn’t facilitate, we’d want to look into it, or something like that. That’s another kind of reason you want to do the bank reconciliation. 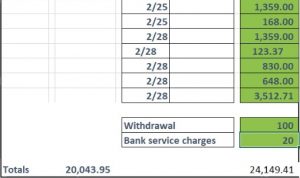 So then if I go back over here, these are the items that are outstanding. So we have a few of them. This one’s on the 27th. But it went to the sales tax went to the government. So it could have taken them a while to you know, to do to process that one. So, and then we have this one going to the Internal Revenue Service, same story. And then we have down here, you know, these ones are on the 29th. So would make sense if you know that they might still be outstanding.

So it doesn’t look too unusual that they’re outstanding, but again, we can check them how because we’re reconciling as of the end of February, therefore, that we’re probably doing this sometime in March. We can go check our bank statement and see if these have cleared in the month of March. So next time we’re going to finish the bank reconciliation up here. Then we’re going to take a look at the reconciliation report, which will recall these differences it’ll it’ll print out these differences as the differences between the bank balance and the book balance.