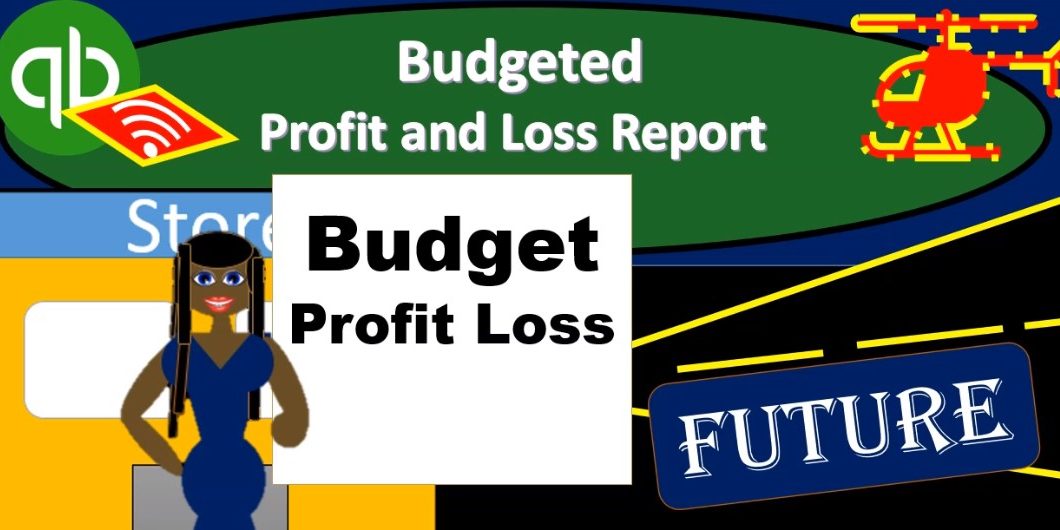 This presentation we will generate, analyze, print and export to Excel a budgeted Profit and Loss report, we’ll take a look at a budget of profit and loss and a budget versus actual Profit and Loss report. Let’s get into it with Intuit QuickBooks Online. Here we are in our get great guitars file. You’ll recall last time we enter data for the budget. And we did so by going to the cog up top and then we went to the tools we went to the budgeting information, and we entered this budgeted information. If you were to edit it, then you can go back into it and enter that information here. I’m going to close this back up, then we’re going to then go into our reports.

The net income as we saw in the data input screen being negative up until August, and we are showing profit on the year of the 6001 71. For the year, you have some of your standard kind of customization tools up top if I was to customize the date range, we can go from January for example for the first quarter, which would be in on Oh 331 to zero and run that report. And then we would say January, February and March and of course the total for that three month time period. We have the similar customizations up top where we would we would do our similar kind of customizing, remove the pennies are going to make the negative Numbers bracketed, it will make them read. Scrolling down, we’re going to say that the header and footer, we’re going to remove the date and time.

So there it is, I’m going to go ahead and well, we could do some formatting here. If I go to the second tab, and back to the first tab, so Page Layout View back to normal view of it doesn’t fit on a page. So we got to do some formatting with this particular one. We’re going to go back up top to the page layout, I’m going to go to the to the page setup. I like select the orientation, bring it to the landscape, and we’re pretty close. That’s pretty close. And then we can basically shorten this one up possibly can shore that one up. And maybe we can shorten all these up.

If I highlight all of them and I double click on them. It’ll make them a little bit uneven, but it’ll shorten them as small as they can go. And we could change basically font sizes if we need to. But I’ll just, it seems like we should be able to make these a little bit smaller, I’m not sure what I’m going to, I’m going to highlight the whole thing and make these a bit smaller and see if it smaller that it makes this one not quite fit like that one a little bit bigger.

So you can see those numbers all the way down. So our comparisons a little bit arbitrary, because of course, we didn’t have a lot of data, we just kind of picked numbers for the budget. But if we were to compare this out with a, you know, we didn’t have any equipment rental, and in January we budgeted 1000. sales were much better here in January, and the sales of the products were much better as well. And then the cost of goods sold is higher due to the sales being higher and We had the budget for the bank service charge we had the depreciation for the budget that we didn’t record the depreciation in January. If I look at February here, let’s take a look at February, we had the depreciation so 900 difference on the depreciation insurance. Here, there’s a bit closer, they roll off by 600 and payroll taxes.

So you could basically go down through and you know, do your analysis from the budget to the actual information. You have some some of your familiar characteristics up top notice what has been selected for you is basically the the dollar over budget and the percent of budget you don’t need those, but that’s there by default. Typically, if I take them off and run that report, it looks a little a little bit easier to look at. But those are those are two things that you would typically want to see if you’re comparing the budget versus actual this would just be comparing the budget and actual but not seeing the difference. between the two, we probably want to see that. So I’m going to go back up top. Those are going to be these items up top. And we’ll run that report.

So we’re going to print it here. We’re going to be printing it to the cute PDF printer. So let’s do that say print down below. And then it asks us where we want to put it. It’s in the right places time. So I’m going to say this is the budget versus actual report say That was an export it to excel, I’m going to close this one out so we can do so and then I’m going to select the drop down here, Export to Excel, it’ll then open up in the bottom left of the Google Chrome, and I’ll open it up from there. There it is, let’s go ahead and copy this entire thing, I’m going to put my cursor on the triangle up top, and then right click and copy of the entire thing.

We’re going to go to the page layout up top. We’re going to go to the page setup. We’re going to change it to the orientation, we’re going to make that landscape And again, that makes it really close here, not quite there, if I if I highlight the entire thing for all the columns and make this a bit smaller, and like a bit smaller, and now it’s a little too small and a little larger, but not that large, but like a little smaller. And let’s do it one more time was the little bit. And so there now that looks pretty good. I don’t see any numbers that have been removed due to that process. So I’m going to keep it there. That looks pretty good. 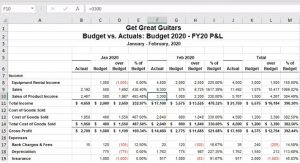 Let’s go ahead and save this. Then I’m going to go to the File tab and we’ll print this as a PDF file with all reports on it will go to the Browse function at the bottom. That’s not what I wanted to do. I want to go to the print. Then we’re going to print it to the cute PDF printer. I want to print not just the active worksheet, but the entire workbook which will have the two pages or three pages. That’s what we want. So I’m going to go ahead and print it to the cute PDF printer. And then it’s going to ask us where do we want to put it, it’s going to the right place that looks good. 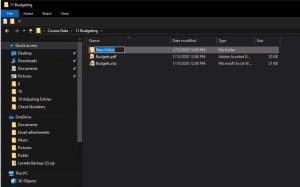 So I’ll rename it and call it budget teen or something like that. And then I’ll click on the folder and we could zip the folder by sending it to a compressed or zip file. So then we can we can attach that to an email or we can open up this report this PDF report and attach simply this PDF report which will have the three pages on it. I believe it does have three pages right yep. So those are the three formats we can provide this information to somebody