This presentation and we will take a look at how to create a budgeted Profit and Loss report or budgeted income statement report. Let’s get into it with Intuit QuickBooks Online. Here we are in our get great guitars file. Before we open up the process of doing the data input for a budgeted profit loss. Let’s first take a look at a profit and loss. We’re going to go down to the reports on the left hand side, we’re going to be opening up the P and L the profit and loss the income statement, this is going to be the poor performance report.

This is the report saying hey, how did you do over time, as opposed to the balance sheet which is how are you doing as of this point in time, and we’re going to change the dates are going to make the dates from Oh 101202 to 29 to zero, let’s say. So that’s where the two months of data that we have been entering from. We’re going to go ahead and run that report. I’m going to right click on the tab up top, going to duplicate that tab. closed up the hamburger hold down Control, bring it back down to that one to 5%. Okay, here’s our profit and loss report.

Now, how are we going to do in the future bunch of different ways and theories in terms of how to come up with a budget, which we’re not going to get into now that’s going to be more kind of analysis or theory kind of ideas in terms of what’s the best way to get a budget in the future? The simple term, however, is how are you going to budget out into the future while you’re going to start and take into consideration in some way shape or form the past? So you’re probably gonna look at the past. And if we had a full year like last year, we might say, Hey, here’s last year, why don’t we look at last year and think about then what’s going to happen this year and think if we’re going to do something similar, if we had a full year last year and you’re doing the easiest kind of budget, then going forward, you could take the year in numbers as of last year. 12 months divided by 12 for the income statement and then say that that’s going to be kind of like your budgeted p&l for for the next year going out, that might be the baseline.

Again, that’s too simplified, because you do want to take into consideration ups and downs through the year because certain months may be better than other months, they don’t want just a straight report like that. But that would be something that would be that would be useful. And you also want to take into consideration things in the future that might happen. So obviously, we’re hoping that the revenue will increase it a nice steady upward, upward curve as we go. So we’re hoping revenue goes up over time as well. And the expenses we would expect to go to go up, you know, as revenue goes up, but in a different kind of relationship, possibly we can consider some of the expenses that are going to be fixed and those that are going to be those that are going to be variable.

So a lot of considerations in terms of how you get the budget, but from a simplified standpoint, you probably are looking at last period and saying, Okay, I’m going to fit next year, it’s going to be similar, possibly been looking into some major adjustments that you think might be there. Well, we want to do is just be able to then once we have an idea of the budget into that budget into the system, and then be able to generate reports in terms of what we expected to happen, the budget that we expected to happen, and then what actually happened, and we can look at comparisons from the budget to actual once we enter this into the system. 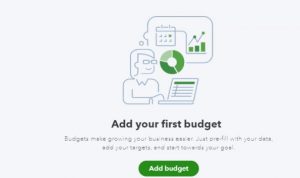 Now, again, if you you know, usually the starting point for the budget is to take last year’s numbers, and basically that’ll be the beginning point. So you could say, Hey, why don’t you just take the actual last year’s to have 2019 numbers and just put plug them into the budget, and then we can have a budget versus actual. Now I wouldn’t say that that’s a really well planned out budget, but that could be the starting point, you could feed into those numbers and then go through it and consider which numbers you need to you need to change.

We can’t do that here of course, because we this is the first year of data, and therefore we don’t have any numbers for last year. So we’re gonna have to figure them out just based on two months worth of data going forward. Next, you’ll see our accounts down here. This of course will be the income statement accounts are kind of grayed out right now because we don’t have, we can’t actually enter the data at this point until you go down to the bottom right where you see the next button, the little green button. That’s the next thing we need to do.

So we’re going to say let’s go to next. Now we have the data input field. So if I go back up top data input field, this basically looks like the profit and loss report, although it has a lot of the headers up top by month, it’s basically the profit and loss report by month. And then we’re just going to go through each of these and enter the data. Now note, we may not enter data for all of them. It’s got all of the accounts that we have here. And some of those accounts we don’t we haven’t used possibly, and really, we’re looking for the big numbers because we’re looking for the budgeted information.

So you’re imagining for January in February that we would be entering the budget before we entered the actual data. And then the January in February would pass, then we can run reports comparing the actual and the budget and numbers. And obviously, we’ll have the budgeted numbers all through the rest of the year here. I’m going to copy this across. So with that little blue button, and that’ll copy it all across. So if everything’s the same for each month, that makes it really easy, but we don’t think it’s going to be the same all the way across because for revenue because we want that nice steady, smooth increase, right? And so we’re going to say I think this should be going up, you know, so we’re going to say, I think it’s going to go up by a nice, steady 15% each period, right? So I’m going to say what if, like I start with 500 that I’m going to increase it by 15% or 1.15 115. percent.

So if I go down to the expenses, then the major expense we will be considering as cost of goods sold. Cost of Goods Sold is typically related to the income for the product, which I have that 500 app. So we’re going to say that the cost of the guitar is usually usually like 80% of the the price of the sales price. So if I was to sell 500 worth of guitar, we’re going to say the cost is 400 and the difference of the 100 is the profit margin. So that’s typically the kind of relationship you would see for the cost. And once you’ve figured the sales price, then you can say, all right, there’s the 1000 up there, 1000 times point eight, that’s going to be 800. Right 800 here. And then you can do this all the way across, you can say, well, then now I have then the 15150 times point eight is going to be 1200, and so on and so forth. So there we have the cost of goods sold.

Now we know interest expense kind of changes from time to time, but this is an estimate. And we’re gonna, we’re basically gonna say the interest is about the same across the 12 months and actually got that backwards. That should be the insurance, I’m going to say insurance should be the 1000. And then interest wasn’t that high, we’re going to say it was, we’re going to say it’s going to be the, let’s say 150. And copy that across. So there we have it. Next, I’m going to look for the telephone. Now notice if I scroll down, it kind of hangs looking now for the telephone.

So I’m going to scroll down looking for the telephone. Here we have it, telephone, that’s the one I’m on and that’s going to be four I’m going to put in 360360. Copy that across. Next, take a look at let’s look at payroll, we’re where we had salaries and wages, I’m going to put in there 6000. And we’re going to copy that across, then we’ll pick up the utilities, which I’m going to put in down here at the 650, we’re going to say that one’s going to be copied across from the utilities. So let’s see what we have so far. I’m going to scroll back up top here and see what we have. So we have the income items, then we got the cost of goods sold. Now notice, we didn’t include something for all of these accounts we didn’t use, some of these accounts haven’t been used at all. And we could go in if we don’t like to be showing up here.

Go in and actually make the accounts deactive or remove them because these are accounts that QuickBooks is using that we haven’t we haven’t used or we might want to keep them there in case we use them in the future. It’s still early in our business. So it might be something that we would use, you can make them inactive as well if they’re not something that you’re using, but you want to kind of see what those accounts will be in case you got to go back into them and fix them or adjusting at a later point. So here we have these items, I think we had a payroll payroll expense because we put it into salaries and wages. And we had the payroll expense.

So I think we used payroll expense before. So we have two payrolls in there, basically, I’m going to put the 6000 into salaries into the payroll expense, because that’s I think the account, we’re using payroll taxes, I’m going to put 300, copy that across, and then this one down here, I’m going to remove this, I’m going to try to close that one out. Like that. So that’s how you can delete it without, you know, basically tab and through the whole thing, you can hit that x and that’ll delete the whole row. So again, x deleted and then we have the rent, travel, telephone, and so on. So it looks pretty good. So notice, we’re at a loss here.

We’re running a loss until until August, so almost and then we start to have Profit happening through the end of the year. So we have a loss for the first year. So we’re going to keep it. We’re going to keep it at that. Now next time, what we’re going to do is we’ll we’ll take this data and we’ll run the reports with it. So I’m going to save this. Then we’ll take a look at the reports. Now there’s two for January in February. We already have that data so we can run comparative reports actual versus the budget. And then of course, we have budgetary information for data that we have not yet entered for the rest of the year.