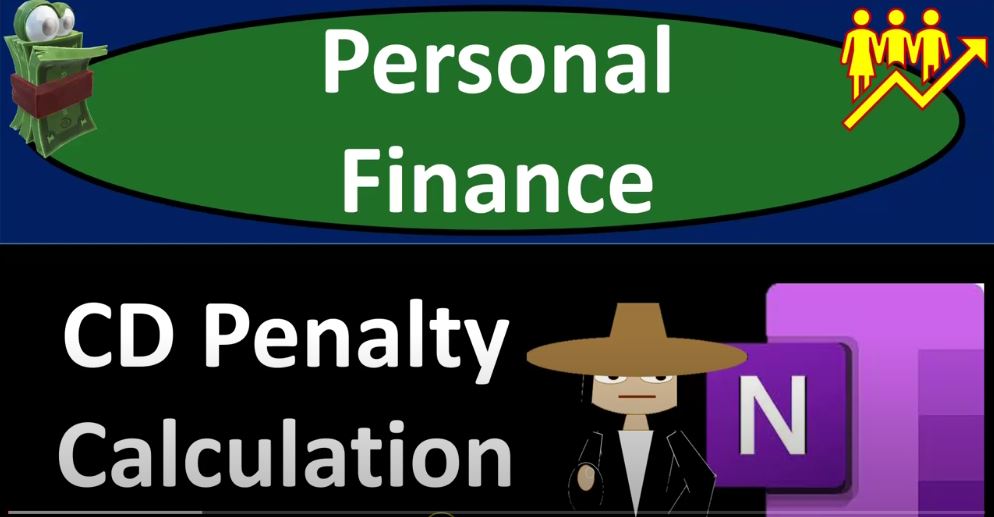 Personal Finance practice problem using one note, CD certificate of deposit penalty calculation. Prepare to get financially fit by practicing personal finance. Here we are in one note, if you have access to one note we’d like to follow along you’re not required to but if we’d like to when the icon on the left hand side when the practice problems tab down in the 41, at CD penalty calculation tab. Also note when using OneNote, take a look at the Immersive Reader tool.

Our presentations will also be in the text area with the same name, same number, but with transcripts, transcripts that can be translated into multiple different languages and either listened to or read in them. Closing the icon, we got the information up top calculations on down below, we’re looking at the calculation of penalties in this case on a certificate of deposit account, which is one of the things that we would want to be considering when we’re comparing and contrasting different investments, we might be putting money into that being the liquidity of it, how accessible is the money in the event that we are going to need it.

This is also a calculation you can apply to other types of penalties that you might want to be considering the calculation of including possibly penalties that you want to be considering in investments such as IRA accounts, individual retirement accounts, and so on and so forth, which might have restrictions, some restrictions to different kinds of savings accounts to consider what the penalty would be, if you needed to pull out the money. Also, it’s a good calculation for us to understand the interest and how the interest is going to be applicable to the time period, which is something often confusing to many people. So it’s a good one, to look through that for that reason, as well.

So remember, when we’re putting money away, and we’re thinking about should we put money into stocks and bonds or savings accounts and so on, we have different kind of restrictions for it. When we’re thinking on the stocks and bonds, you have some pretty good leeway for the stocks, if you’re putting money into mutual funds to actually take the money out unless it’s under the umbrella of say, an IRA or a retirement plan in some way, shape or form, in which case, you have a similar kind of scenario. But then of course, you could have losses which relation to stocks.

Whereas if you’re thinking about investing in savings accounts, something like a CD savings or something like that, then you would think that you’d have fairly stable you should have stable increases, because you’re likely because you have a standard agreement as to what the rate of return will be. But it’ll typically be less than the potential, the possible earnings that you can have from the possibly stocks, which means you could actually have losses with stocks.

So when we’re thinking about then the savings side of things, then we might be comparing between savings accounts, certificate of deposit types of accounts, and so on and so forth on that side, when we think about the certificate of deposit, then typically we’re locking in our money to some degree, so that the bank can depend on that money being there. And that’s beneficial to the bank. Because remember, what the bank does, is they take our money, they hold on to just a bit of it, a reserve of it, they loan, the rest of it out for small business loans, and mortgages and so on, and they earn interest on the loans on our money.

So if we can promise them that we’re going to put the money in for a set period of time, they have a better basis on which to make more loans and whatnot. So that’s generally going to be beneficial to them. However, for us, of course, that means we might get a bigger return. So we’re measuring our bigger return, compared to our control we have over the money. So then the question is, well, how much money do I want to put in? And what if I need it? What if there is an emergency or something like that? Do I have an emergency fund that can cover us through an emergency?

Or could I access these funds if I had to in an emergency? Now, typically, if you were to access the funds, you would generally be you might be able to get them still get to the CDs, but then you’d be penalized in some way? And and then the question is, well, how high? Are there penalties? And am I willing to put this much money away? running the risk that if I do need it, if I need to dip into it, possibly I could, but I’d have a penalty that I would need to be paying in the event of that happening.

So let’s calculate what the penalty would be if we were to say okay, we promised the bank that we were going to put in this $30,000 into a certificate of deposit CD certificate of deposit And then we take it out before it The thing is due or up, and they’re gonna penalize it, how much would it be paid panelized. So know, what we have here is we got the interest rate, which we assume is an annual interest rate. Because remember, remember that that’s how the interest rates are typically given to us. But we have two months of penalties.

So now we have this kind of situation where we got to break down the annual rate to a monthly rate. So we can calculate it, we’re going to do this multiple different ways. And this is a good problem for us to kind of see how these real rates need to be tied out to the period. So I think that the most the clearest way most people would do this problem is they would say, Okay, well, the investment is 30,000. If I multiply that times the 4%, which is the annual rate 30,000 times point oh four,

I would be interest of I’d have interest of 1200. But that would be interest on an entire year, because that 4% represent an annual rate. So I can then say, Well, let me break it down two months, because we’re talking in terms of months here, how much would that be per month, let’s take that 1200 divided by 12 months in a year, that would be $100 per month. And we’re talking about two months for the penalty. So we take that we multiply then times two, and we’re going to get to our $200. And we’re saying that the penalty, we would estimate to be the $200.

Now let’s do that a couple different ways here, because it’s useful for us to allocate that person out a couple of different ways. Another way you could get to this is you could take the 30,000. And let’s say let’s now think about what the monthly rate would be, because we’re talking in terms of months, two months. So I will calculate the monthly rate. This is another way we might see this, we’d say okay, the yearly rate is 4%, we got 12 months in a year. So if I take that point, oh, four divided by 12, the monthly rate would be quite small and a repetitive decimal, if I move it to places over point 333 on forever, the fact that it is small, is one of the reasons we don’t usually talk in monthly rate terms, because the 4% is a lot easier for us to discuss.

However, if I’m discussing something that’s a yearly rate of 4%, and you’re doing calculations in terms of monthly terms, then you got to know how to do the calculation. So that’s the pros and cons in terms of our communication. And you know, the problem between the interest rates and the periods that are applied. So if we take that and then multiply it times the 30,000, we’re gonna say we’re gonna say this 30,000 times the point, the point, Oh, I’m sorry, the times the point, oh, 3333, forever moving the decimal two places to the left times the 30,000.

And that’s going to give us our $100, that would be $100 per month. And we said that we’re two months once again, so we multiply that times two, because now we have our monthly amount, times two would be 200. The other way you can do it is you might say, Well, wait a sec, why don’t I just give me the rate, not for one month, give me the rate for the two month time period, I can give you the actual rate for the period cover two months, even though the two month period is an unusual period to be given a rate, you know, of that two month period. But we can do it, we could say okay, well, what if I take the investment of the 30,000.

And then we calculate the two month rate. By taking the fort, there’s a couple of ways we can do this. But we’ll do this this way, the 4% divided by 12 gives us that monthly rate that we calculated up top of the point 333 3% or point oh 33333. And then we’re simply going to take that, because that’s a monthly rate, and we got two months. So we’re going to take, we’re going to take that and multiply it times two times two, and that’s going to give us our point oh 666 on forever, or point 666667 about percent. And so then we can simply take that.

So this is the rate then the percentage rate for the period covered, which is an unusual period of two months. Right. So now we got the two month rate. So we have to always apply out the rate to the proper period. So now we’re going to take that times the 30,000. And that’ll give us directly to that $200. So whenever you’re thinking about these rates, wherever you’re calculating them, whether they be penalties or earnings or whatnot, remember, you got to kind of match this this out.

If you give them a straightforward problem like this. Usually I would calculate the interest on the year if we’re given the interest rate, and then break it down to the periods if it’s monthly divided by 12 times two also just realized that you might do this, you might take the 1200 divided by the number of days in a year. And if you want to make it nice and even there’s 365 is closer to the actual days. But if you want to make it even you can take divided by 12 times 30 or 360 averaging each month to be the same 30 days in it. So we can divide it by We can divide by 360.

That would be the the daily amount, the amount per day. And then we’re talking two months, which we’re going to estimate about 30 days each month, which would be 60 days. So we could say times 60, and we’d get to our 200. Again, so Meaning, if we’re not given months, you could break it down into days, and do the same kind of the same kind of concept with with days as well. And you can get to the daily the daily percent, which would be a small number, and so on.

So it’s useful to kind of think about this in a few different ways. I think this first way is the most common kind of way or easiest to do when given this type of problem. But when you’re using something like Excel, oftentimes they’ll they’ll use this kind of method, making making the rate you got to make the rate match, you know, the periods that are going to be covered.