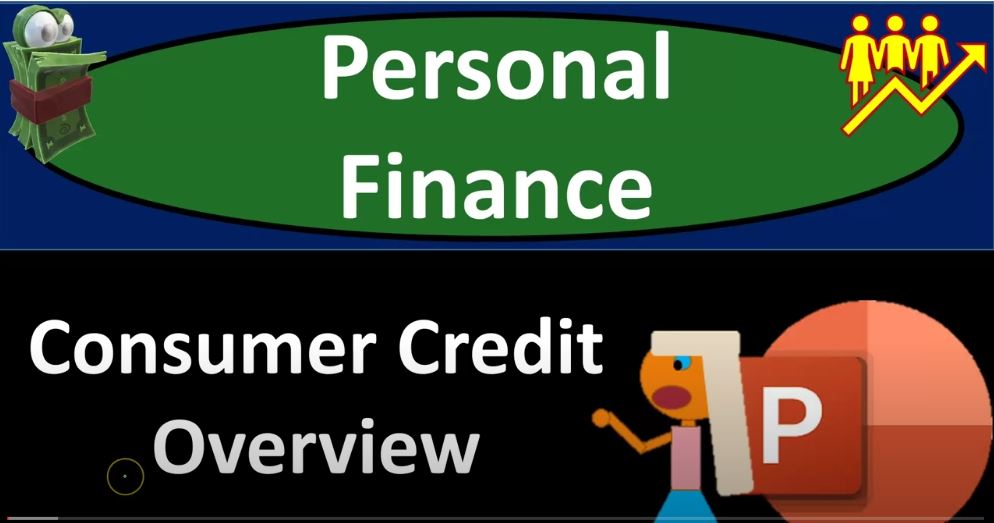 Therefore, when you hear someone talking about credit, you want to make sure that you’re understanding the context and how the term is being used, we hear we’ll be using credit generally to mean the defined as an agreement between a lender and a borrower. So in essence, a loan if an institution a financial institution, generally offering credit, meaning we’re going to have a loan basically offered in some way, shape or form. That’s how we’re going to be focusing in on the term credit here, credit can also refer to an individual or business credit worthiness or credit history.

So when they say your credit, they might be talking about someone may be referring to your credit worthiness, your ability to get a loan based on your past history, such as your credit history, and so on cash flow, and so on. That then is something we might look at in the future. But that’s not our primary use of the term at this point, we’re looking at the extending of the credit, meaning the financial institution generally being the extension of the credit,

extending the credit to person, and then the institution may look at the credit in terms of credit worthiness as a characteristic as to whether they can extend the credit, then we have a credit may either decrease assets or increase liabilities, as well as decrease expenses or increase revenue when used in accounting. So if you’re looking at accounting terms, then you can also use their credit in that format, which can be confusing in and of itself. So if you’re doing the bookkeeping, you’re talking debits versus credits, which don’t have any real meaning in bookkeeping,

other than there are two sides of an essence, the ledger, and they can actually get a little bit confusing when you talk about banks, or credit card companies, when they say they credit your account, because they’re kind of talking about bookkeeping, they’re kind of talking about what they’re actually doing to your account. So that can be a little confusing in and of itself. But we’re focused here up top on the credit in terms of a financial institution extending the credit, so we have consumer credit than consumer credit, the personal debt taken out to purchase goods and services.

So we’re talking about personal debt as opposed to business generally here. And generally personal debt is taken out in order to purchase goods and services, a credit card is one form of consumer credit. So clearly, one of the most common formats of consumer credit for normal purchases rather than big ticket purchases, is usually going to be a credit card, or though any type of personal loan could be labeled consumer credit, the term is most often used to describe unsecured debt. unsecured means it’s not going to be supported or backed up by some kind of asset.

Although we’ll see that there will be exceptions to that because in essence, when you’re talking about credit for something like a credit card, it’s not secured by anything, meaning if you don’t pay the credit card, there’s not something directly tied to it, such as there is with like a mortgage, or something is tied, basically unsecured to it, that is taken by a person to buy personal goods and services. So typically, the use of the credit in that case, is going to be buying goods and services. That’s what the personal person would be wanting to do generally,

however, consumer debt can also include collateralized consumer loans. And these can be kind of more specialized categories, of course, which fall into mortgages and car loans, those often being you know, things you’re considering more in depth for a long term purchase kind of decision, because of course, you’re talking about bigger dollar purchase items that you’re getting the credit for.

And because you’re talking about larger dollar amounts, the structure of that debt will typically be different. So as consumer credit we have the installment credit is generally used for a specific purpose and is issued for a set period of time. So these are just kind of the general categories that we might fall into installment loans being a typical type of loan.

Typically for larger ticket items, we’ll talk more about the different structures of the loan in future presentations and the pros and cons of them. But typically, if you’re talking about a car loan, or if you’re talking about a home mortgage or something like that, you’re setting up the installment loan typically paid off in amounts that are going to be standardized over a period which is usually monthly periods. revolving credit is open ended loan that may be used for many purchases.

So with the revolving credit, you of course, have much more flexibility that would be more like a credit card type of credit, where you can make purchases as you choose. And you’re not so locked into basically the installment credit which you basically took out for usually one specific purposes and made an agreement to standardize the credit terms over a longer period of time. So the disadvantage of revolving credit is the cost to those who fail to pay off their entire balance and every month and continue to accrue additional interest in charges.

So we’ll talk more about the pros and cons of different types of credits in the future. But obviously, in general, when you’re talking about the installment type of agreement, you’ve made the agreement, you’ve locked it in towards a longer kind of period of time, when you have the revolving credits, you have more flexibility to make purchases as you need over the short period of time. But of course, that can lead to say over purchasing or something like that.

And that could lead to having to pay then interest and penalties on the loans. Also note that it’s possible that depending on the on the company or the terms of the loan, you might have some changes in terms of the rates that would happen or be applied over time, which which could also be a little bit more confusing when you’re talking about the revolving credit as opposed to the installment, which usually you’ve set in a more fixed term at the at the start. And you don’t have to worry so much about things like the interest rate changing or things like that because you set the terms upfront.