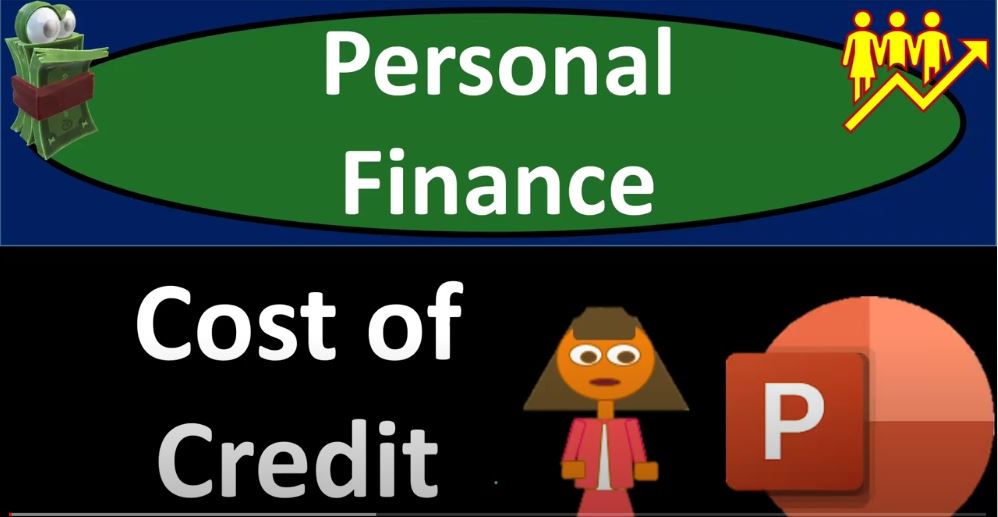 Personal Finance, presentation, cost of credit, prepare to get financially fit by practicing personal finance. When thinking about the cost of credit, the cost of taking out a loan or the cost of personal financing two terms we want to keep in mind is the finance charge and the annual percentage rate or APR. First, starting with the finance charge, this is going to be a term which we will define as the total dollar amount you pay to use credit, it will include then the costs of credit the costs of using the money or taking out a loan, having the purchasing power in advance, that includes interest.

When you think about interest, I would generally compare interest in your mind to basically like rent. In other words, if you were to rent, say, an apartment, then you’re paying for the use of the apartments, you’re not you don’t own the apartment, you’re just using the apartment, and you’re paying the rent on it, not for the future ownership of it. But in order to for the use of it the same as the tree with the purchasing power of money there, you’re basically using the purchasing power of the money, even though you don’t actually have the money.

And therefore you’re gonna have to pay back the money itself, just like giving back the apartment that you might be renting, that’s the principal needs to go back. And and that doesn’t include the cost of it, of course. So if you were to be loaned $1,000, or $10,000, paying back the $10,000 is similar to paying back, say or giving back the apartment, but removing the use of the apartment at the end of the lease term. That’s not a part of the cost. That’s something that you’re going to have to give back. And of course, you’re going to need the funds in order to give that back in whatever way the terms have been set up.

The cost, though, is the rent over and above that which in this case would be the interest on it. That’s what you’re paying for the use of the money in this case, the $10,000, before you actually have the $10,000 in order to use. So we have the cost of fees, such as service charges, so any fees that are going to be in place, possibly fees that could be incurred when setting up the loan. Now note, the combination between these two things can get somewhat confusing.

So when you’re talking about financial institutions, and they’re trying to determine or tell you what the what the interest rate is, or what the costs will be, it could be a little confusing between the types of costs they can have, then we also have credibly related insurance premiums and appraisal fees. So these top two are often the ones that can get a little bit confusing, because we can understand what they are, we could say, okay, the interest represents the the renting of the money, whereas the fees could be the fees, in essence to set up the loan or something like that, which might be a fixed type of costs versus the interest.

And so there’s some standardizations, as we’ve seen in prior presentations on how loans are often normally set up to offer the larger loan, oftentimes, it’s in an installment type of format, that helps us to standardize these things. But the calculation of the interest can be one of the confusing factors, especially when you’re looking at loans, which are using different calculation terms for the interest like an interest only loan, a variable interest loan, balloon payment loans, those get more confusing than a standard kind of installment loan, which in and of itself is a bit confusing.

But because it’s more standardized, oftentimes we get a better handle on it, we’ll take a look at a bunch of practice problems. So you could do some comparing and contrasting to actually build these loans and think a little bit more about what the fees or costs are, and how you can compare different loans in our practice problems. Now, then, when you have their costs that are in the format of fees, you can imagine a situation where the loan could be set up to have higher fees, possibly the fees being paid upfront, or being included in the loan.

And then they can by adding fees, they can increase the fees and lower the interest rate. And that’s one way they can basically come out to to earning a similar amount of money, but having a different combination between the interest rate and the fees. So now you have a situation where they could have some complexity with different interest rates. And they could be charging different fees and have a different combination between fees and interest, which can make it more difficult to compare one loan to another loan, because now you’ve got they’re charging you in these two different ways and they can basically put the money on both face.

So the question then is how do we standardize these types of things so we can compare different financing options between different institutions and different loan types. We’ll do a bunch of practice problem. So you can hopefully understand this stuff a little bit more. One tool that we have is called the annual percentage rate or APR. This is one way that we can try to standardize these types of things when they would, so we can standardize what the interest rate is going to be. And then we can also try to standardize the loan payments into a rate. So that we can be comparing, you know the same thing to the same thing apples to apples, as they say.

So the annual rate charged for borrowing or earned through an investment. So normally, when we’re looking at a percent, an annual rate, so the interest rate, then oftentimes, it’s going to be conventional to to annualize it. And this will typically be the case when you’re looking at larger loans.

So when you’re looking at loans that are going to be multiple years and so on, typically when they state the rate, it will be an annual rate. If you’re looking at very small loans that are going to be for a small period of time, like months and not years, then you might hear someone say give you a monthly rate. And the monthly rates a little bit confusing, because that’s not usually what we think of that’s not the timeframe we think of it’s like it’s like if someone said they earn a $60,000 salary or something like that, we automatically say a year because we just we assume, of course, when someone says salary we usually think a year.

So we want to see what the rate is on a yearly basis so that we can compare it to other types of things. So the annual rate charged for borrowing or earned through an investment, financial institutions must disclose the financial instruments APR before any agreement is signed. So laws have been put in place to try to try to do some of this standardization process. So you can do better comparisons, because the interest rate is something that you should be able to compare a little bit more easily. But again, there’s still some complexities between the different rates. So you still have to be knowledgeable about this to some degree.

So consumers may find it difficult to compare aprs because lenders have some power to choose what charges include in their rate calculation. So again, there’s still some flexibility with the APR. So it’s just it’s kind of another tool. And APR may not reflect the actual cost of borrowing because of the fees that are included or excluded. So one other thing with another thing with the APR, depending on how the APR is going to be generated is that you may include say the fees and the APR.

So we said they could kind of make things complex by having something other than an annual interest rate, in which case we would try to annualize the interest rate try to standardize the interest rate. And they also could break out differences between fees and interest. And that can be confusing as well. So oftentimes, we might try to put that into one number, meaning try to include the fees into the percentage number so that we can have a percentage comparison that will be easier to compare between one loan and another.

That also is not a perfect fix to all the problems just just one more stat that can be useful for us to do comparisons. But it can be a good tool for us to compare loans that have substantially different fees and interest rates, combinations that they’re going to be putting into place. So these are some of the tools that will apply. only real way to get a grasp of these is just to work practice problems within work a bunch of practice problems. So you can calculate the the aprs and think about this situation where you have fees and interest rate and then judge the cost of the loan, as well as with different loan types and see different methods we might use to be comparing different loan types in such a way that it’s a comparison that can help us lead us to a good decision.