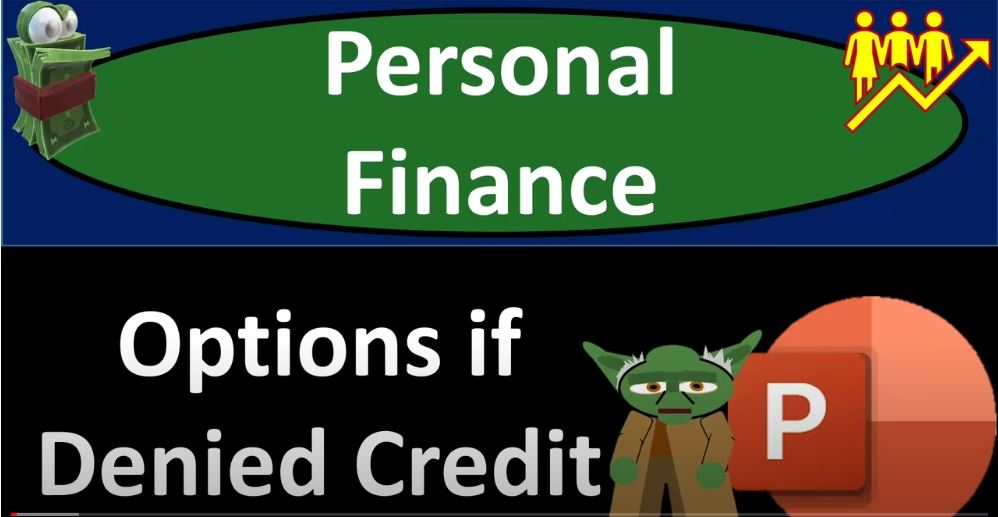 Personal Finance presentation options if denied credit, prepare to get financially fit by practicing personal finance. We’re now thinking about a situation in which were denied credit. So in other words, we look for a loan, we look for financing from a financial institution, we’re denied the loan or financing, what are the options at that point in time.

So these are the general outcomes, you might come to you, right? If so, if you’re denied the credit, you want to see what were the reasons for the denial come to the determination, which may be of these broad categories, which we will go into in more detail for each of them, which could generally be you believe the reasons are valid. So what can we do? If that is the case? You’re saying, okay,

I can see why they denied the credit. I believe they applied the same standards to everybody and I didn’t meet this particular standard, what should I do at that point in time, you are not sure if the reasons for denial are valid or invalid? So you’re saying I don’t know if they applied, you know, an equal standard to everybody? And if the reasons they provided are valid or not. So did they give me the actual reasons? Or the reasons that they gave me somewhat vague?

And or do I understand basically, the reasons that have been applied, and other reasons that they gave me valid, or you can believe that the reasons for credit denial are invalid, and the creditor has discriminated against you. So if we look at the reasons, they give you the reasons, and you’re saying, hey, that doesn’t line up with I think the equal standards to everybody across the board. And there’s some something strange about this, then we’ll talk more about that category.

So let’s use the three categories. Let’s look at the first one, which is probably the most common one, you believe the reasons for denial are valid, meaning you’re thinking they applied the uniform standards, as they apply to everyone to see whether or not someone could repay the loan, they denied the loan based on some valid reason, obviously, if it is some valid reason, they would have to determine or tell you specifically what the reason is, so that you can know exactly what it is.

And hopefully at that point, then you should be able to take action on it to improve that situation, or look for other financing, where the standards might be different for that particular area. So you can ask the creditor if you can provide additional information or arrange alternative credit terms. So you can say, Okay, well, that seems like a valid point for that particular type of credit. Are there any actions I can take at this point in time?

Or is there some alternative form of credit, some other kind of financing that we can do at that point that can work around that particular problem, so apply with another credit creditor whose standards may be different? So the next step would be let’s go somewhere else. And note that if you’re in a market, where there’s multiple people in it, which hopefully is the case where there’s competition for people that are giving loans, then that would be nice that you could say,

Okay, if I was denied here, why don’t I go to another institution and take it take a look at their standards and see if they come out to the, to the same kind of thing. And or, of course, if you’re looking at different types of interest institutions, as we’ve seen in prior presentations, you might have different kind of loan arrangements that would be involved in different standards, that that could be involved, as well. So you can go back to like the hierarchy of the costs of loans and what types of loans might be available at

that point. So take steps to improve credit worthiness. So obviously, at that point, you should be able to say, Okay, I denied the credit, you told me exactly what it is. And now I can work on that thing, most likely to try to improve it. So the common types of things would, of course, be to increase income would usually mean you’d be more likely to be able to pay the loan payments.

So if you’re somehow able to increase income, reduce spending, so that you can show that your monthly payments, you’re clearing the expenses, by a large larger margin, that might be good for that debt payment ratio, pay bills on time. So clearly, if it’s a if it’s a credit worthiness kind of situation, situation, your credits not as good as they have could be or something like that, then you want to make sure that you’re paying the bills on time and possibly increase the credit score.

And whatever the condition is, if they if you know exactly what it is, and you ask them, How can I improve that certain thing, then you should be able to focus in on that and improve it possibly, and then reapply for the loan or say, hey, look, I need the loan. Now, what are my other options either at this institution or other institutions? So on the second, on the second question, you might say, hey, you’re not sure if the reasons for denial are valid or invalid. And that might be the case that they gave you vague information. And this is a type of information when it’s just like when you ask anybody for feedback, and they say, I’m doing this I’m denying you this or this.

I’m doing something that you don’t like or something I don’t like what you’re doing and I asked why. And the answer is, is basically because I told him I said, so because I said, Sir, or something like that? Well, that’s a vague reason I have no, I don’t know if that’s a valid reason or not. Or if there’s some valid reason behind. I know, that’s not a valid reason. Because you didn’t tell me anything, you just basically you have no standards at all, you just basically said, just because I said, so that’s not a reason. So at Red, you got to have a uniform reasons across across the board. So what you could do at that point, right? If you don’t know whether or not it’s a valid reason or not, is then you want to make sure to clarify the reason

possibly then even looking at it, comparing it to other financial institutions. And like I say, if, if there’s another institution, that that basically is close by an and in competition, and we think there’s something that may or may not be valid in that, then that’s the way you can meet one way you can measure it, if there is no other financial institution, if competition for whatever reason is not there for for financing of that particular sort in one area. That’s when problems often occur, because you don’t have the compensation.

So then it’s harder to see whether or not you know, people the business is working, and applying standardized policies, and so on, so forth. So that consolidation of power, bad, bad stuff, so may believe the reasons for credit denial are invalid, and the creditor has discriminated against you. So if you come to the determination, hey, look, the reason you gave me isn’t valid, it doesn’t look, it doesn’t seem like you’re applying a uniform application and or the the, whatever you applied is not in alignment with the law, then you’re then you can take action from that point in time.

And again, even if you’re at this point, then then the question at that point would be well, what’s the what’s the best scenario for me to take action here and get the loan from this institution. Or, again, I would think if you could try another institution, just to prove that fact to you to be able to to go somewhere else and say is this other institution coming up with the same information and that might more validate your case, and then possibly go go forward with the case just out of principle at that point in time, but you might be able to do that double verification, if there’s some other institution,

that that would have the same standards or similar standards and just see what their comparison would be if that, if that was to be an option, and then take action. And then again, when you take action on this, you may be able to provide pressure to the institution, and you could come out with a beneficial result just simply from the pressure, where the institution might be, you know, might say, okay, I’d rather, you know, do something other than get into a litigation lawsuit, whether whether it be right or not, or whether they won’t think they should be arguing it or not.

So that could, but it could also be a costly kind of move as well, depending on how you would go forward to put pressure on the institution. So one way you can go, you can notify the federal enforcement agencies whose name you were given, the Federal enforcement agency will investigate and report back. So if you if you do that route, then it could be a way to provide pressure in such a way that it doesn’t cost you much right to do that, because you’re not actually hiring the lawyer.

And that way, and if they can apply pressure to the financial institution and get a loan, you know, you might be able to get a loan, you know, at that point, you know, or the more expensive option would be to hire a private attorney to file suit against the creditor, because that usually will mean that you’re probably paying the attorney whether or not they win or lose the case. And if they lose the case, then you could end up sinking money into it. If you win the case, then it can be a beneficial thing. So that’s a more risky kind of situations, you would think.

So if the court finds discrimination, the creditor must pay you actual damages, plus punitive damages. So obviously, if you win the case, then it can be a beneficial thing. Everybody wins. Obviously, the lawyer wins either way, so the lawyer is the only big winner no matter what happened. But in any case, that would mean that that that they would have to pay, pay out and hopefully pay the damages of the of the cost of the lawyer and so on, and then punitive damages to try to get the institution to punish them, in essence to change their behavior in the future of generally punitive damages.