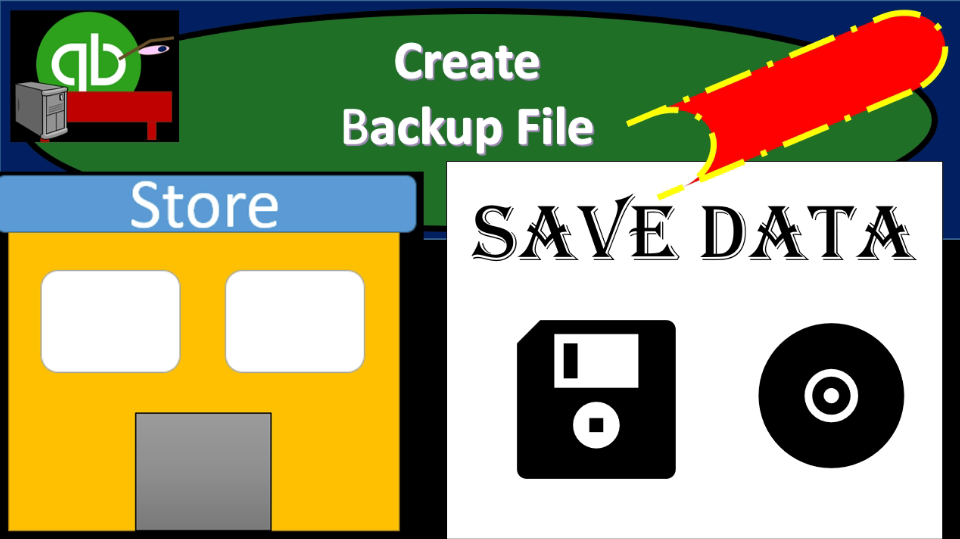 so that we can then restore to the original settings. And it’s also very useful to have a backup file just for practice. So if you’re trying to practice something, such as if you are a student, then it’s useful to have backup files that will have different locations for static backups. For a something like we have here, a practice problem that we will be going through in the future practice, our static backup files can then provide us the data up to a certain point in time. So it’s very useful for something like students as well.

But of course, the primary use of the backup file is to support the data in case there’s some kind of crap in our in our normal file and we can’t retrieve the data, we can then go to the backup file. When we consider that type of backup, then, the consideration then is where do we want to put the backup file, where’s it going to be? Now what we want to do is have it somewhere other than our normal hard drive typically. So if we have it on the same hard drive, it may solve a problem if there’s a problem with the actual QuickBooks software or the QuickBooks file.

For example, if you work in the office, then you can take the hard drive of the data. And you can take it home periodically. And therefore if there was a fire in the building, then you would have your data in at home on the hard drive. Obviously, the other option you have these days is the online option. And that’s a great tool as well, because you can then save it online. And again, if there’s a problem to your entire office burns down, then the hard drives within it will all burn down with it.

But you’ll still have the cloud copy. And that should be a good way to go. As we practice here, we’re going to be putting it on the same hard drive that we are on so that we can practice just saving the backup file. And again, that could be very useful for many other reasons that you might want the static hard drive if you’re a student. Or if you just want to practice something if you want to test something out, then there are other many reasons why you might want the hard drive on the same file just to have the backup file. So let’s go through how to set up the backup file. 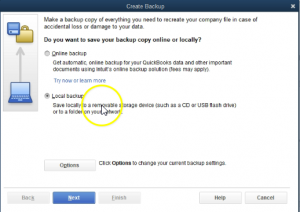 This is nice to have you because obviously when you go into the backup file, the question is always when I want to restore it, I will how recent is the backup file, it’ll also make it easier to save multiple backup files to the same folder, because they won’t have the same name because they’ll have a different date and timestamp. So that’s the default setting to have that checked off, it’s usually a good one. And then you can limit the number of backup copies in this folder. So in other words, you’re going to be saving your backup files to the same location.

Once you do this, for a long period of time, these are fairly large files that can take up a lot of space. So you may not want a whole lot of backup files within their they default, then to three, and then they’re going to basically delete the prior backup file. So you’ll have three backup files at all times, you may want to increase this a little bit, I usually keep it a little bit higher than that. But that’s a nice system to have so that you don’t end up with a you know, a year down the line with you know, 365 backup files, which can take up a lot of room. And then we have the remind me to back up when I close my computer file every four times. So that’s going to be the default.

Whenever you close QuickBooks, it’s going to say hey, do you want to have a backup system? Do you want to backup the data. And it’s going to remind you every four times to do that in that you can think well is that a reasonable amount of time that I should be backing it up, I would actually backup the system, at least nightly. Or if you don’t use it every day, every time you make a change. I mean, every time you make a change, you might as well make a backup file doesn’t take all that much time. So I typically will do that every time I I opened the QuickBooks unless I’m just looking at it.

For if I’m actually making any changes to it, I’ll typically back up the QuickBooks file. And then we have the options down before below, select an option to verify that your company data is ok. That it is not corrupted when you save. So you can have the complete complete verification, that’s the default, that’s the recommendation, quicker verification or no verification. So I would typically keep it on the default there. So now I’m going to close this out. 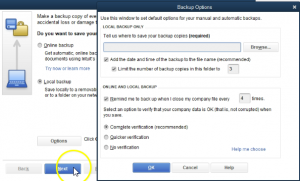 Now I’m going to close this out. Note that we went there by going to the option selection here, we’ll get in essence the same screen if we go through what we will normally do, which I would normally do going through the process, I select a local backup. And then I simply go to the next item down below. And we get this bit this screen, then I would say Well, once these are all set up the way we want them to be, we’re simply going to go to the browser, which is going to be the location on whatever drive we have to see where we want to put it.

Now if you want it on an external drive, then an external drive will show up something like this will have whatever port it is in. And then we could save it to an external drive that is connected to the computer, I’m actually going to put ours on our desktop once again in our folder that we have been setting up. Also note that you have this kind of drop down screen, you’ll actually have two screens to put this information in. So if you’re not used to this drop down screen, don’t worry, there’ll be another screen that will look more like a normal kind of saving type of screen. So I’m going to say I want the good, great good.

Let’s read this one, actually, you’ve told us to say backup copies to the same hard drive C drive that holds your company file, we don’t recommend this. Instead, we’d recommend that you save to a default drive or a removable storage device to avoid losing the backup due to an unexpected hard drive failure. So what they’re saying is don’t save it to the same drive that your company file is on. Because if the whole drive goes down, you lose both files. 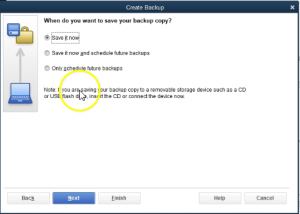 But for us, we’re going to say okay, we’re going to use this location anyways. And then I’m going to say either save it now, save it now and schedule future backup. So you could have a schedule setting for setting up the future backups, or only schedule future backups. So if you would like to basically schedule have a scheduling option you could do so for me, I don’t think it doesn’t take too long to backup the system. So every time I really make a change, if it’s significant at all, or at least once a day, I’ll save it. So if I get into the practice of backing up at the end of the day, if I use it every day, if that’s what I’m, that’s what I’m doing. Or if I use it periodically, every time I open QuickBooks, I will in essence, make a backup file when I’m done.