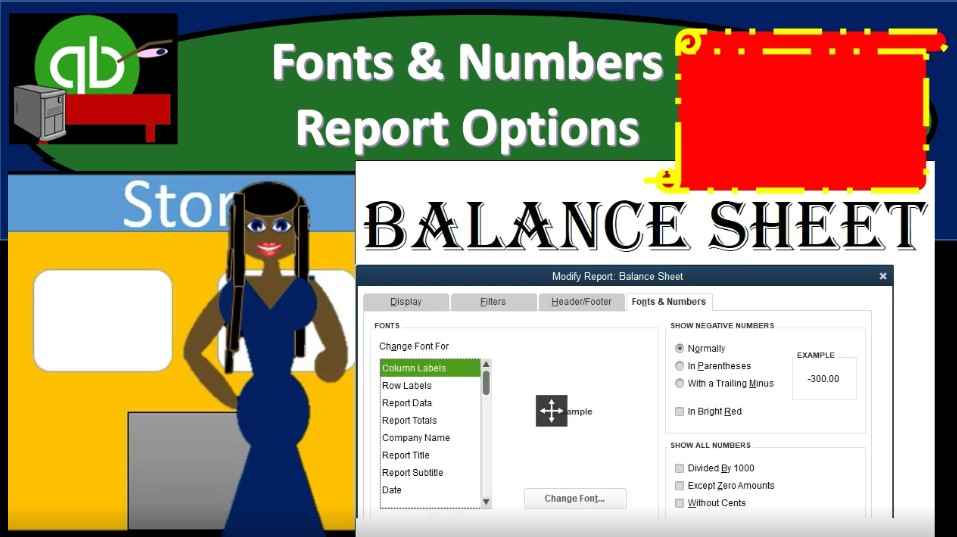 This presentation, we will take a look at the fonts and numbers options within the reports options related to a balance sheet. These options will be found in most other reports as well, we will do this within QuickBooks Pro 2020, QuickBooks desktop 2020. Here we are in our get great guitars file, we currently have the open windows open in order to open the open windows, you can go to the View drop down up top and go to the open windows that list, we’re not going to be going into our balance sheet and continue exploring the options in there, we’re going to go to the reports drop down in order to do so that company and financials and then scroll on down to our favorite report, that being the balance sheet standard report, we’re not going to be considering options and the customized reports. 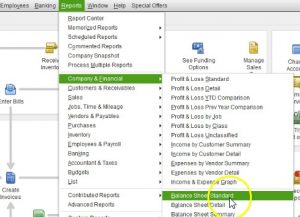 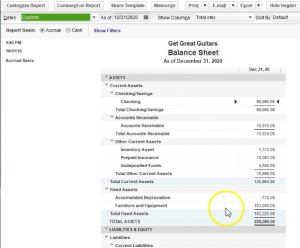 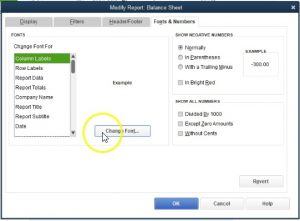 We also have the effects, which include the strikeout effect, or the underlying effect that can be included. And then we have the coloring options will play a little bit around with these. So you can get a feel for them. These can be a great tool, they can also be over us. So you don’t want to go over the top with it. But if you do a little bit of changes here or there to the QuickBooks report, it really gives a little bit goes a long way it gives a feel to your reports that are a bit different than other types of reports which can can make you stand out I can you don’t want to go too far with them, I would stick with the normal default. 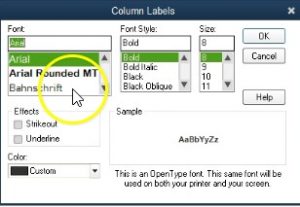 So you also don’t want to make default settings that would be difficult to do for other types of reports to mimic that default setting. But once you set the default, if you have your customized default, then I’m going to close this out and close this out, you can memorize those reports. And then you don’t have to do it every time. So it could be a great tool to set some of the fonts to be a bit different. If you want to change the title a little bit or memorize some reports, alter some reports and change those titles, then you can do so and again, that could be a nice touch. To have on the reports back to the customized reports up top, we’re going to go to the fonts and numbers.

Then on the right side, we’re going to first explore these items on the right side, then I’ll show you a couple examples. On the left, we’re changing things like the color and the font and whatnot. So if we have these show negative numbers, normally QuickBooks will show negative numbers with a negative sign. As we can see here for depreciation, for example, we have a negative 775. I kind of like to see them with parentheses, which they will show like this, it’ll stand out a little bit more. That’s my my personal preference. And if you would like to stand out a little bit more, you can make them read. So it’ll look like that. 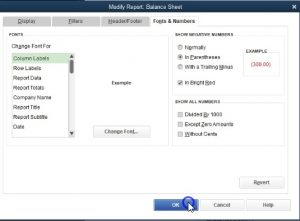 If I was just if I was to select this, then we’ll say okay, now we have that negative number that really kind of pops out for us both being bracketed. And with a negative numbers, you can have it just read and no brackets, or brackets and no read whatever kind of setup you would like to see, we’re going to go back into the customized reports, we’re going to go into the fonts and numbers. The other effect we can have is the negative trailing the number which might be useful in some areas, it’s not something I’m particularly used to most of the time, so I would keep it with the parentheses, I would generally remove the red brackets, that’s just my personal preference, then we can show all numbers. 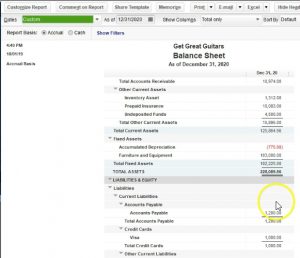 So we can divide the numbers by 1000. Note that I can take all the numbers and divide them by 1000. If I was to check this and say, okay, and if we have long numbers, if we have a lot of numbers, then this can be a useful way to display the numbers. So we can have that as a useful way to display. If I go back up to the customized reports. Typically, if we do that and go to the fonts and numbers, we will also be removing the pennies, we wouldn’t divide by 1000 and a half of the pennies, they’re typically so we would say remove the pennies too. And then there we have it. Without this sense, we can also go back up top customized reports, and go to the fonts and numbers. And we could basically have to thousands but remove the pennies have it have no sense that the reports still make sense, but it has no sense to it has no pennies involved in it. 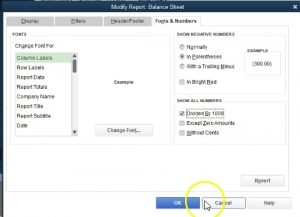 So we’re gonna have no sense. Okay. And then we have that type of report. So then we and that can use that can look a lot cleaner, this might be something that’s very useful to do. Some people don’t want to see the pennies that just add up, they just kind of clog up the the viewing screen. And they don’t basically add any more value typically to normal decision making processes. So oftentimes, this is a useful tool to help remove the pennies remove the sense, if we go back up to the customized reports and go to the fonts and numbers. And now let’s take a look at some of these changes to the font styles. Notice you could change like individual areas within the report. So for example, we could change just the column labels. 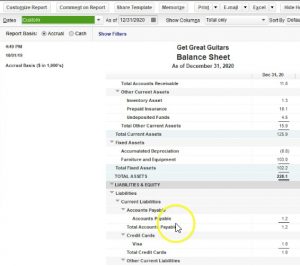 If we have a report with multiple columns, like here, the column label, the row labels, the road data, so the actual data, the numbers in it, we have the report totals. So when we go down to the bottom, the total amounts, we can change the fonts there, the company name, which of course is up top here, the report title, so the report title, the report, subtitle, the date, and so on and so forth, let’s take a consideration with the report title. For example, if you wanted to customize your report title in some way, then you can go to the change font. And you know, say you want a different font on the on the report Title I again, I wouldn’t choose anything, that’s two, you want you want pretty straightforward fonts. But if you want something a little bit more bold or something like this, like I wouldn’t choose something like this unless you 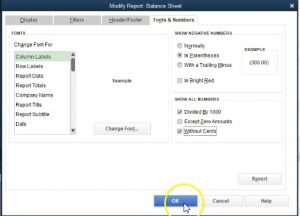 for some particular reason you want a really fancy looking font, on the name possibly. But typically, I would use a, you know, more straightforward font that doesn’t have a lot, a lot of detail into it. But that’s just my preference. Let’s choose one that is a little bit different here. So we can see what that’ll be like. And then I can, I can apply this just there by saying I could make it larger, too. 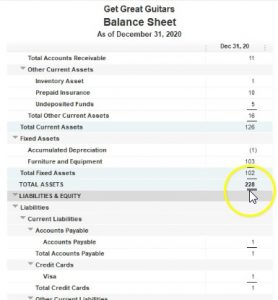 We might say, well, let’s make it 16 font, it’s already bolted. So let’s keep it there. And we’ll say okay, and then it’s going to give you this default change all related fonts. And I’m going to say no, for this time, I just want to do it to the company name, which is what I have selected. Now if I say it’s all related funds, it’ll in essence, apply it out all to the related fun. So I’m going to say no. And then I’m going to say okay, and there we have the company name, his name is going to be different. So I’m not an expert at timeout, you know, the best fonts and whatnot. So these are just some options. If you’re really good with fonts, and you’d like to, you know, mix and match and put the fonts together that looks really nice, then you can you can adjust these in this format, we can then go to the fonts and numbers. 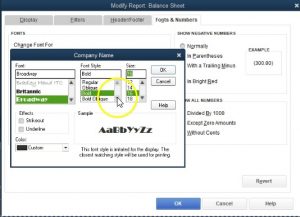 And if I was to say, do this for a color, for example, if I went to the the report title, and we wanted to change the color to it, I can make it something like a green color, here’s the color drop down. And we could say okay, and then again, I just want to say no, just apply it there. And then Okay, so then we have the color changed. If you want to change something like the color or the font of everything, you can go to the customized reports up top, you can go to the fonts and numbers. And for example, if I was going to go to the company name, or let’s go to the report totals, and I wanted to change the font, and I wanted to make them all a certain color, let’s say you know, say red, and then I said okay, and then if I want to change all related fonts, I can just simply choose change all related fonts, and say yes, and then Okay. 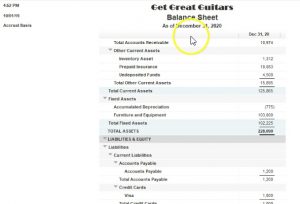 And then you could see basically it apply that to all related fonts, pretty much all the fonts here, except for the other one that we had changed previously. So again, you can mix and match with these type of things. I wouldn’t go too far with him but a little bit, a little bit of your personal touch on the fonts, a little bit of change from just a standard, I could make your reports pop a little bit a little standout and might be worth doing. And once you do them, you can memorize them which will show in a future presentation. 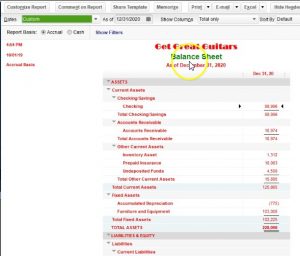 So you wouldn’t have to redo it every time. We’re going to go back to the fonts if you want it to revert back, then you would go to revert back. And okay, that’ll revert it back note also if you wanted to reverted back obviously, you can just delete you can just close the report and start a new report. You know and do it again. If I didn’t like all the red there or whatnot. I do it just closed the report up top. Go back into reports. Go back into the company and financial make a new balance sheet standard. Adjust the dates up top 201 a 120 to 1230 120 January through December, and then we can just go back in and make any adjustments we need from a fresh report. 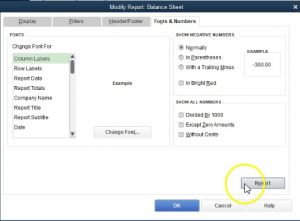