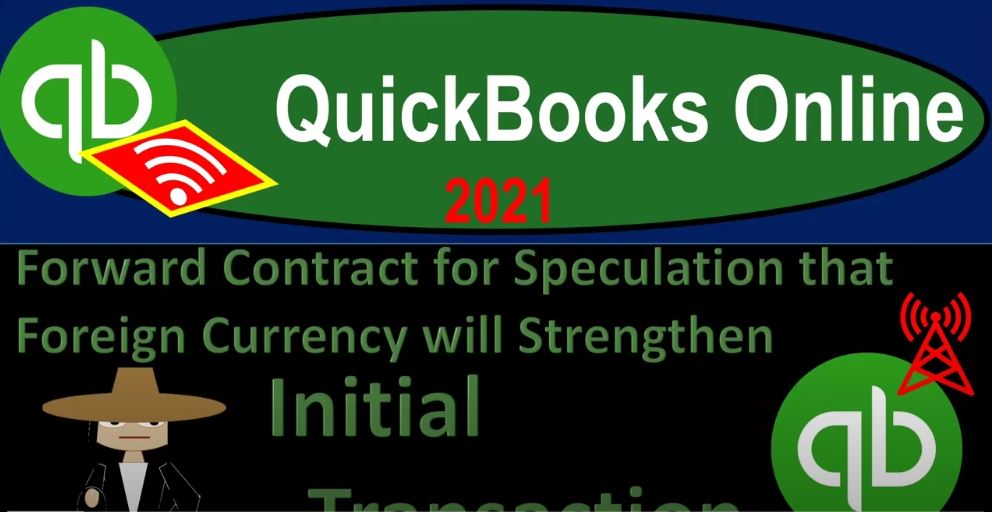 closing this back out. Now we’re going to be setting up then our initial kind of transaction. Let’s first think about that within Excel. So let’s go on over to Excel. And we’re going to go to our practice problem tab over here and enter the initial transaction. Here’s this scenario. So on 12 1x, one US company entered into a 120 day forward contract to purchase Australian dollars. So what that means, basically, is we did a speculation contract, we’re thinking that the Australian dollar is going to be stronger in the future in relation to the US dollar.

it’ll be paid more than the current transaction, we’re going to set up in the current day. So if we go to an exchange broker, we can actually set this up and say, hey, look, what I’d like to do is get paid, we’re going to say 100,000 Australian dollars in the future, and I would like to then pay you, I’ll pay you the same amount in US dollars, the equivalent amount in the future, we would like to say, based on the current exchange rate, but we’re gonna have to use some kind of speculative rate to do that.

So the key point here is we’re going to be receiving this in the future, we’re going to say the future will be we said 120 days, which will be on 330 1x, two of the next year, we’re going to be paid then 100,000 Australian dollars, and we will then pay the broker, whatever we promised to pay in US dollars at this point of time. So you would think then, what we would do is pull out the trusty cat is that we would and this is what we were doing a normal transaction, we would say, Okay, we got the 100,000, though, in the future that we’re going to get, let’s multiply that times the spot rate point six, and that would be 60,000.

That’s what you would think would happen, because that’s what would happen. Normally, if it was like a normal business type of transaction, say we say we made a sale on account, then that’s what we would typically do. But because this is a speculative transaction, the exchange brokers not going to accept that they’re going to say, look that yeah, that’s the spot rate right now, if you were to exchange right now, but it’s speculated that the forward rate will be this point 609. So now we’re gonna have to use some other rate, it’s not a spot rate, it’s a forward rate.

Remember that this spot rate is what it is, that’s what it is, at this point in time. That’s what the difference is between the currencies, because that’s what the market is currently doing. the forward rate is a speculative rate, but it’s still market based, the market is speculating what they believe the rate will be. And that’s what of course, the broker is going to want to be using here. So that’s going to be the difference, we’re gonna have to use this rate, when we pull that rate in QuickBooks,

QuickBooks won’t give us that rate automatically, most likely, right, we’d have to get that and negotiate it with the broker, QuickBooks will typically give us the spot rate, because it knows what the spot rate is, it doesn’t typically calculate for us the forward rate, which we would have to then get from the from the broker and be up to date on that. So if we put this on the books, then we’re just gonna, we got to take this 100,000 that we’re going to get in the future and we’re going to multiply that by the spot rate, but the forward rate, that’s the difference so that’s going to be our receivable and our payable.

This one, we promise to pay based on today’s speculative rate, forward rate in the future 60,900, this one will not change. So therefore, if the if the foreign currency units get stronger, the Australian dollar gets stronger and we get paid in Australian dollars, then we gain we have a gain on that if the Australian dollars get weak, weaker than we’ve we’ve made a bad speculation, and we’ve lost on it. So now what we got to do in our books, then is set up these accounts, so that we can then record these transaction on our books.

Now, there’s a couple ways we can do this. If I go back on over to QuickBooks over here, I note that in the desktop version, if I go down to the accounting tab, normally, if I was using the desktop version, we’re on the online version, you usually use an account that is going to be a foreign currency account. So if I was to say new up top, we would typically want to be using like an accounts receivable account or an accounts payable account, because those are the ones that have the foreign currency transactions units in it. The problem with it, one of the kind of difficulties with those two accounts is that typically we use those accounts in relation to forms receivables and invoice payables a bill to populate those forms, we don’t typically enter journal entries to that.

And so we could do that we could do that and then basically use that as transactions. And then of course, we have to track the customer and vendor as the sub ledger. But the the quick, but the other way we can do it is basically to just have a normal kind of journal entry. And for QuickBooks Online, because it doesn’t have that automatic kind of update process. For the adjusting entries, the journal entry might be the easier way to go. So it might just set up in a receivable and payable type of account and record the transaction just simply with a journal entry.

And let me just show you why real quick. If I duplicate the tab up top, if we right click on the tab and duplicate this tab, just so we can take a look at what the journal entry will look like. So we can see what we’re doing here. If I hit the drop down, and we then go into the journal, this would be a journal entry, how we’re going to record this is going to be with a journal entry.

And then I’m going to set up another one and this is going to be a payable. So I’m going to say that this is going to be an other current liability type of account. Instead of an accounts payable account, I’m just going to call it other current liability. And I’m going to call it broker payable and USD for the US dollar. Once again, I’m not going to change the currency for it down below, we’re going to save and close that. Now let’s basically add the Australian dollar to our currencies, we could do this basically, as we go a couple ways you can do it, you can go to the cog up top here, we can then go to the currencies.

Now note that even in Real Life, QuickBooks would give us kind of like the spot rate on that. And we would typically have to change it because we’re not using the spot rate, we would have to use the the rate that that we negotiated with the exchange broker, which would be some kind of forward rates, and we’d probably have to change it in practice anyways, which is going to be the point 609. So I’m going to say point 609. Now, this obviously isn’t an actual rate, we’re just using it for our practice problems, I’m going to say save it.

And then we’re going to say the receivable was that receivable we set up for the broker. So we said receivable exchange broker, and I’m going to put this in the 100,000 foreign currency units, we probably could put then and description but I’m not going to here. And then I’m going to say the other side is going to be a payable that we set up for the exchange broker. And so there is that. So that puts it on the books for the 100,000 Australian dollars, you can see down here, US dollar equivalent to 60,900.

So this represents the fact that we’re going to get 100,000 in foreign currency units in the future. And this one shouldn’t be the receivable, this should be a payable, this is broker payable, and then we’re going to pay the broker there it is in US dollars in the future, it’s going to go on the books for the 60,900. All right, let’s save it and close it and see if it does what we expect it to do, save it and close it.

So you got the BS balance sheet, and then you got the TB trial balance that’s trustee. So we’ll change dates up top running it for 2020. This is what we have thus far that matches out, I believe to what we have in our Excel worksheet, we do want one other thing, we should put just the 100,000 on the books for our practice problem. So I’m just going to add that in US dollars, just so we have that. So I’m going to go into the first tab, hold down Control, let’s just put 100,000 that we can that we can play with here.

Other side I’m just simply going to put to the equity account here. So something like a retained earnings, retained earnings. There we have it. Let’s save that, save that and then check it out back to the trustee TB running it. And there we have it. So now we got the 100,000 cash other side and equity and then the receivable and the payable that matches what we have here on Excel. So I’ll be printing out these trial balance eyes so that you can look at them as we go through the practice problem.