Remember the objectives of the thought process is going to be that we want to get moving when recording journal entries. We want to make sure that we don’t hit a wall and that we can’t move forward. We want some kind A system to help us to make the steps forward. So a thought process will tell us where to begin. Oftentimes, there’s a lot of different areas where we can start recording a transaction. There’s no necessarily correct or incorrect way to start recording a transaction. But if we have a system that will help us to just leap right into what we want to do, help us avoid errors when we make that system and help us to move forward. The second reason we’re going to use a thought process is that it does eliminate many errors that people start to think about when they think about debits and credits. Just like in math, it’s possible to have one set of problems, apply a rule to that set of problems that works only for that set of problems and is not a universal rule doesn’t work in all sets of problems. there that would not be too bad of a problem. 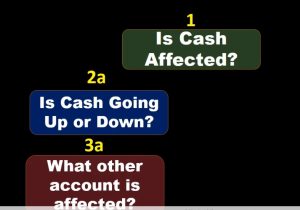 Unlike another account, like if we’re talking about unearned revenue or something like that are many liability accounts or a lot of different accounts or accumulated depreciation, it can be difficult for us to understand whether it goes up or down. Once we know if it goes up or down, it can be difficult for us to know, should we debit or credit that account, we will start to learn the debits and credits related to cash much faster because one, it’s an easier account to deal with. And two, we will be dealing with it a lot and therefore will start to memorize How do you make cash go up or down debit or credit? Once we know that then we can move to the second account. Therefore if cash is affected, we’re going to record the transaction for cash. Whether it goes up or down. We’re going to ask ourselves the question does cash go up or down? key words will be received cash and paid cash.

Most books will use those things terms. And obviously, if we received cash, cash is going up, if we paid cash cash is going down, then we can record the part of the journal entry related to cash. And we’re gonna have to apply a rule in order to see how things go up and down. So we’re going to do the same thing to it as its normal balance to go up. So cash would go up with a debit and down with a credit. We’ll talk more about that later. But once we record cash, then we can think about what happens to the other transaction. Note that once we have half the journal entry in there, if there’s only two accounts affected, say cash went up, say we debited cash, then the other side must be a credit because we need an equal number of debits and credits within every journal entry. And therefore whatever other account we need to be dealing with, we know which way it will go in that we know whether to debit or credited after we have thought about what happens to cash.

So that’s going to be the thought process we want to give get going. Now if we go back to step one, and we asked is cash affected, and we say no, it’s not affect And then I would think about what we received, what did we oftentimes what did we get, oftentimes, it’s going to be at an expense or we purchased an asset. And by by doing that, we can think about it and account often times closer to cash, meaning if we purchased an asset, for example, it’s going to be something that we received, it’s going to be an asset, it’s going to act similar in nature to cash. And therefore it might be easier for us to interpret whether it is going up or down, and therefore whether to debit or credit it. Once we know that then we can use that information to apply to the next half of the transaction and see whatever other accounts is affected which way the other account is going. So let’s take a look at an example. We’re going to say paid cash for utilities of 750. That’s going to be the transaction we’re going to ask our first question is cash affected? key term here is paid so we’re going to say yes, cash is affected.

But just note that once we know what’s happening with cash, we can we’re going to credit cash. Then according to our rules, we need to debit something. And so we can actually write that down. We’re going to say cash is going to go down if we were to post that it would decrease cash in this case from 124 400 down by 700. 50 credit to 123 650, we also know that we will debit something, so I’m just going to write down the debit. If I was doing this by hand, I’d write down the credit, write down the debit, then we just need to know what this account is, I know I already know we’re going to debit it. In other words, that’s that’s the point of this, of this process or one of the points of the process, then we’re going to say what other accounts is affected. So we pay cash for utilities.

Now, if we go through this, and take a look at the trial balance, we can go through the list of accounts and I always recommend having a trial balance in front of you, if possible, even if it’s not related to the problem you are working with. We can see down here that we have utilities expense, that’s probably going to be the account related to utilities. We can then say utilities expense will then be debited. Note we already knew that we were going to debit utilities expense because we credited cash that’s one of the reasons to use a process such as this. Note, however, that we do want to double check the utilities expense and analyze why we are debiting the two expense so that we can get a better understanding of what this account does how it functions, rather than just doing whatever we need to do to it. Because we did a credit to cash in this case, we want to understand it. So you want to double check after you apply this system after it works.

After we get the completed journal entry. We didn’t want to say utilities expense, what type of account is that? On the trial balance, it’s down here in the expense section. Note that we always have the order of assets, liabilities, equity, revenue, and then expenses. We are down here within the expenses. All expenses have debit balances, and they typically only go up, and therefore we’re going to increase it by doing the same thing to it, which in this case, is another debit. We’ll talk more about that rule later. But just keep in mind that we do as we apply this system, I want to double check this other account that we came up with just by knowing what we did to cash first so that we better understand it. Then we’re going to go back to step one and we’re going to have another example where we say purchase supplies on account. We’re going to apply our first question is cash affected. And the key term here is on account.

Whenever you see that in a text, it might say on credit, but many texts avoid the term credit in that context, because they don’t want to confuse the term credit with debits and credits in terms of recording debits and credits. Therefore, if you see that term in terms of purchasing something, it typically means either accounts receivable or accounts payable when purchasing it means accounts payable, it means we have not paid cash in essence, so cash affected? No, in this case, because we bought something and we didn’t pay cash, kind of like we bought it on a credit card. And therefore we got to go to the second question.

So what have we received? Now you might be saying, Hey, why don’t I just think about the fact that we paid for it not with cash, but like kind of like a credit card, which in this case would be our payable account. And we could start with that, but it’s a little bit more difficult to know whether the payable is going up or down. Whether or not we should debit or credit a liability accounts such as payable. If we think about what we received supplies in this case, it’s a little bit easier supplies we can see up here isn’t is close to the asset is an asset, it’s in the asset section. So it’s going to behave in a similar way as cash. And it’s pretty easy for us to say, we got supplies, we’d received supplies, supplies, then is going up. 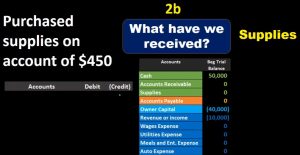 So what other accounts is affected? note we didn’t pay cash. So cash isn’t decreasing as we purchased these supplies, we bought it on account on account means kind of like a credit card account or an account, we owe vendors for that being the accounts payable account. So accounts payable then is the credit. Note once again that we knew that we were going to credit this account because we debited the supplies and therefore didn’t really need to analyze why we are crediting this account. But if we were to analyze and we should analyze it, and we will analyze it as we go so that we can get a better sense of what accounts payable is and how it how it behaves in terms of debiting and crediting how to make it go up and down. We know that accounts payable is a liability accounts. Liabilities have a normal credit balance and two and we need to make it go up Because we owe more money, we owe more of the bad thing. Therefore, we’re going to do the same thing to it, which in this case is a credit. Again, we’ll go through that one rule more in terms of how to increase or decrease accounts in a later lecture in a later discussion. But just note that we do want to double check on those and see why the credit is going to accounts payable so we better understand that process. Objectives. We are now able to list a thought process for recording journal entries. Explain reasons for using a defined thought process and apply thought process to recording journal entries.