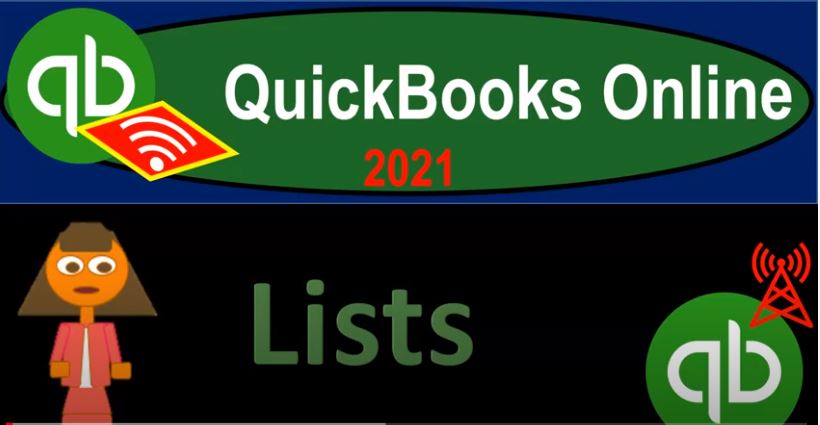 So to get an idea of the term lists, let’s first jump over to the desktop version, because that’s probably where it originates. And then we’ll take a look at those lists in QuickBooks Online. So if we go over to the desktop version, we talked about some of those items that don’t really fit into the flows per se, they’re not part of the forms that we’re going to be doing on a day to day process. But they’re going to be very important, often underlying what we’re doing.

And they’re often part of the setup process. When we set up our QuickBooks Online. The two major things that are the two major list items being the chart of accounts, and the item list. Now these things have been housed in the QuickBooks desktop version for a very long time under this drop down, which they simply labeled lists. So for that reason, note that in this is a terminology thing.

When you’re learning that the terminology of QuickBooks, you want to be careful about it and be Be mindful about what you are learning because when we have terminology for accountants, so people that go through, you know, a formal accounting education, they’ll have that that terminology that they will be using, probably focusing more on, like debits and credits. And then we’ve got the terminology for QuickBooks, which has a lot of overlap, of course, but there are some things in QuickBooks will that will be specific to QuickBooks we saw, for example, the income statement more often been referred to as a profit and loss report, a p&l report.

And then you got things that kind of generate just from the functioning of QuickBooks, such as having a drop down of lists here that houses these items. So many people that use QuickBooks now, kind of think of these items as something that is under the category of lists. So if you hear lists within QuickBooks, and even the QuickBooks Online is still using this terminology, even though they don’t have that same drop down, then you’re going to want to keep a couple things that are going to pop into your mind, the two big things that are in the list are going to be the chart of accounts.

And I think the one that might pop into people’s mind even more, so it’s gonna be the item lists. And those are going to be the service items in inventory items. So let’s check those out in QuickBooks Online. Here, you can get into those items in a few different ways. But right now, we want to look at the cog up top, and then go into our lists. So here’s the the short list of lists, and that’s going to include the products and services. Those are the item lists of things that we’re going to use to create our invoices in our sales receipts. We’ve got the recurring transactions, attachments, and tags, let’s go into the longer list of lists. Let’s look at all the lists here.

We might have another section in and of itself that goes in more to reoccurring trends. actions, it can be very useful. Many people really like the feature of reoccurring transactions because one, it can save time. And two, it can, you know, remind you so that you don’t miss certain type of transactions. So custom form styles, so customize your sales, form designs, set defaults and manage multiple templates. So if we go into the customization of the forms, then we could set customization of the form. So we have the new style up top of the invoice estimate and sales receipts.

These are the forms that are going to be going or could be going to customers or clients. And so we could go through the customization of them. So that we make whenever we contact with the client, we make it as nice a contact as possible with the forms being laid out in a custom style. Again, we might go into that in more detail. In future presentations. After we go through the practice problem, which will be focused more on just the logistics of recording transactions. Then we have payment methods, displays, cash, cheque and any other ways you categorize payments you receive from customers.

So if I go into the payment methods here, when we saw the drop down for the payment method in the receive payment, and the sales receipts, how we’re going to get paid, the typical items that you’ll you’ll have there, you’re gonna have cash and cheque. And then you can add other items, other methods that you want in that drop down, which will give you kind of an informational type of form, you can make a new one up top, so you can run a new payment method basically up here, going back to the lists, then then we have the terms displays the list of terms that determined the due dates for payment from customers or payments to vendors.

So if we go to the terms, then these are going to be the net terms that when we create an invoice, for example, how long from the point in time that we create the invoice which is going to put an accounts receivable in place, meaning customers owing us money, how long do they have to pay us. So they have set up here, net 1015 3060 day terms here, you can make a new one up top by creating new terms up top if you want to have some different type of term setting. Then we have the attachment displays the list of all attachments uploaded.

From here you can add edit, download and export your attachments. You can also see all transactions linked to a particular attachment. And then we have the tags down here, which is an interesting feature fairly new feature. And the QuickBooks Online don’t believe it’s on the QuickBooks desktop. And we again, it’s one of those things that it’s a little bit specialized, we might go into it in more detail after the full practice problem, not one of the core. It’s not like one of the core things you need to be to be putting together your bookkeeping system, it’s probably not used by a lot of people.

But in certain circumstances, the tax can be a neat, neat thing. And they can give you some more ways to sort your information that weren’t available before. So displays the list of all tax created. You can add, edit, and delete your tags here. So we’ll go into that possibly more. Again, after the full practice problem. We might dive into that a bit more to get used to it but the main two under the lists, Chart of Accounts and the products and services so we’ll talk more about them shortly.