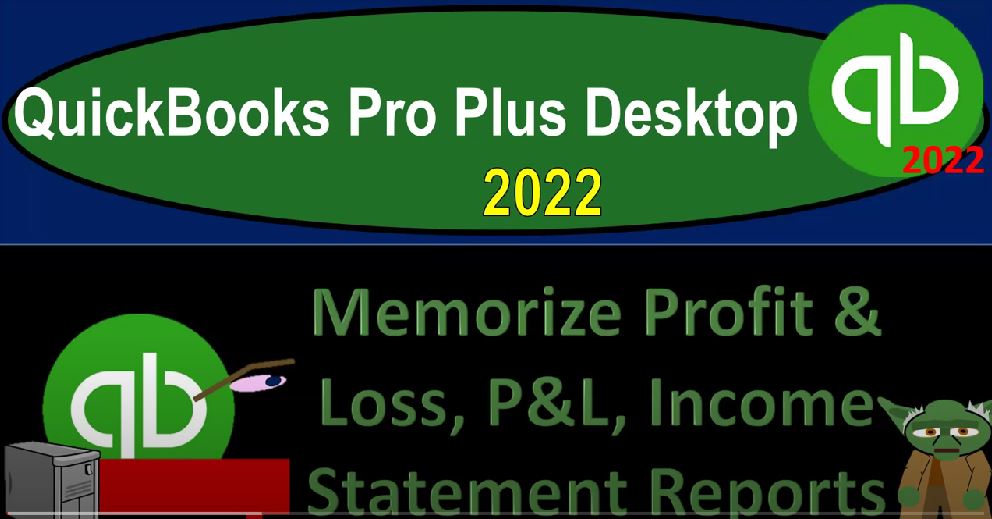 QuickBooks Pro Plus desktop 2020 to memorize Profit and Loss p&l income statement reports Get ready because we bookkeeping pros are moving up the hilltop with QuickBooks Pro desktop 2022. Here we are in our free QuickBooks sample file sample Rockcastle construction going through the setup process with a view drop down the open windows list left hand side, that company dropped down home page in the middle maximize on that home page to the gray area.

We now want to think about the memorization of some of the profit and loss or income statement reports Continuing the theme that we had last time, which is to think about grouping those memorized reports in such a way that we can provide them either to a supervisor or a client, possibly at the end of the month, the quarter, and or year. So let’s think about where we can put these memorized reports. By the way, if you weren’t following along with that same kind of scenario, the memorizing of them will be basically the same, you can apply your own scenario to the skills we’re learning here.

So let’s see where we’re going to put the memorize reports. First, we’re going to go to the reports drop down the Report Center. And in the Report Center, we want to be considering the second tab on over I’m going to maximize it, which is the memorized area in the memorized area. Then we have our memorized reports the categories on the left hand side by default, QuickBooks will put in their own basic categories by default, what we did in the balance sheet section is to customize our category for our our needs. We did so by selecting the Edit memorize list here, and then deleting the categories that were there.

And we’re assuming that our goal then with these memorized reports, is to try to group the reports in such a way that they’ll have customized reports that will be there for specific needs, possibly, for example, our client needs as of the end of the month, so that at the end of each month, we could just print the reports that are necessary as we can see the balance sheet reports in there, and then package them together in whatever way we choose.

We’re going to assume now that we’re going to be adding income statement reports to this report category. The client month end reports thinking about which kind of income statement reports would be most useful to a client basically, at the end of the month, you can see here, we already have a whole bunch of balance sheet reports, the number of options goes up a lot as time passes as you start comparing period to period. So let’s go back into the income statement, just recreate some of them and then memorize them, I’m going to go to the reports drop down,

So I might say that I would like to collapse the columns, for example. And now we’ve got a collapsing of all the subcategories which can shorten the report a lot. And this might be the first report that we would want them to look at. We might call this a summary report, I’m going to call it then just a summary income statement to make a change here, remove the items on the left hand side as is our normal customization. So I’m going to go to the Customize reports here.

We’re going to then say that we got the date range, we want to go I’m also going to add the percent of income item here. And then I’m going to go to the header and the footer. And let’s call this an income statement summary Income Statement summary. So that’s going to change then this item here on the name going to then remove the date prepared the time prepared the report basis, we’re going to put our name in the footer, Robert, you can put your name there in your footer.

And then I’m going to go up top in the fonts and numbers area. I’m just going to put the parentheses around it and make the negative numbers read. I’m going to remove the pennies so it has no sense removing the pennies, and then we can make it larger so we can see it here, changing the font up to 14. So we’re going to Okay, yes, and then okay. And so there is our report at this point in time. And so I’ll save this one. Now I’m going to memorize this report. So I’m going to go up into the memorize area, the name looks good.

So I’m going to keep that as is I’m going to go to the Save reports, going to hit the drop down, and I want to put that that looks good, it’s going to the right place, I’m going to put a nine in front of it, because I want to number it. So it’s not going to be in alphabetical order. But the order in which we want to print it and I think we were left leaf left off our nine, I’m not sure. But I think so.

January, February, March totally up for the three months, we’re going to call this base, basically an income statement by month or something like that, I’m going to call it. So I’m going to go up top customize it, we’re going to go to the header and footer. And I’m going to call this an income statement. by month, let’s just say by month. And we’ll we’ll save it there. And we may not need this item here for that for the date. Because that date might not be quiet, it’s still accurate for the most part, but we might not want and I’ll remove that date, because we got the dates up top, I’ll say okay, and so here’s our dates up top. So let’s keep that one.

And so I’m going to memorize that one memorizing it. And I don’t want to replace the other one we did but make a new one. Now, a new one income statement by month and I’m going to say this is going to be number 10. On our reports, it’s going to go into that same category. So there it is, we’re going to say okay, check it out in the memorized reports and say, Did it do what we want to do? It did, but then notice that it categorized it, it didn’t put it down at number 10. Because it’s not reading the 10. It’s reading the zero as less than the next item.

So that’s a little confusing, but that’s okay. We’ll keep it that way. I’m a little frustrated. To be honest with you. I’m a little upset. But that’s all right. I’ll live with it. Okay, and then the next thing we might want to do is a side by side comparison, a comparative income statement. So let’s customize it again. And say let’s do it month by month comparison, let’s say we have the latest month, which is oh, 10123 not a one, let’s make it Oh 103, I should say a 123. And then I’m going to go down below and say we want the previous period.

So now we have a side by side comparison, percent change, and the dollar dollar change, and then the percent change, I can memorize that one, making a new report, I’m going to put the 11 in front of it 11 On this one, save it in the same category. Okay. Check it out our categories over here. So that looks good. And then let’s go back to the reports. Again, we’re going to go to the comparative item.

And so now I’ll uncompress these items, I’m going to refresh it, and then expand the rows. And then we’ll do our vertical analysis. So I’m going to go to the customized report. And I’m going to go back to saying this is going to be from Oh 10123203 31 uncheck these items down below. I’m going to do then the percent of income, go to the header and footer and call this an income statement.

Vertical analysis, let’s call it, which I’ll probably spelled wrong here, but let’s try it out, which we’re going to call an income statement for to call a now assists. There we have that I’ll save that one. And so then we have the vertical analysis, income statements, go back to the customized reports, it’s on by month, I don’t want the month on there. So I’m going to hit the month and make that go to the total total only. Okay, that’s what I’m looking for on that one. So let’s save that, memorize that report, memorize new this time. And I think what are we on like 12 Number 12 on the report, save it into our category. Okay.

And then I can go to my memorized reports, area number 12. Let’s go back to the reports. Again, just to show you how many different reports you can do, you don’t have to do all these different reports. But just realize, just you can, you can end up with a lot of different reports just on variants of comparing the income statement, and so on, when you have a few months that are in place. And you can also do comparative to the prior year. So you really want to think about what what are the best group of reports that you can you would want to be providing.

So then the next one we could do, we could do the full income statement now. And we’re looking then at we did the comparison by month report, so I can hit the drop down. Say I want to see it by month now, but not with the income statement. And this is just going to be the standard income statement. Report by month, report that one. So there we have our three months there, Let’s memorize that one, memorize it, replay or new item, this is for number 13. We’re on now, putting it into our category and Okay, checking out our memorized reports. Again, there’s number 13.

So there’s a lot of other reports you can do. If I go to the to the memorize list, though, we can think about which reports we think are going to be most important on a period by period function. And this might be overwhelming. We’ve got 14 At this point, just with balance sheet and income statement reports, right.

But you know, that’s the idea that this is the idea that you can basically put together next time, we’re going to go into those income statement reports, and basically print them out, export them to excel and see how we can group them to provide them to a supervisor or a client. And we’ll figure that out next time. And note I know I did these fairly rapidly.

So if I missed any kind of formatting, or standardization then then obviously you could take take your time to do your own formatting and standardization is just an idea to get the types of reports that you might think about compiling and how you can do so efficiently.

Comparative income statement. And Okay. There we have that now we’ve got the march, and then February the change, and they percent. Let’s save that one. And let’s make a new one. And this is going to be number 14. Putting it into that category. And okay. So I know that’s a lot of reports, you may not want that many reports, there’s many more you could do, because you can compare it to the prior month you compare to the prior month by quarter, you know, compare.