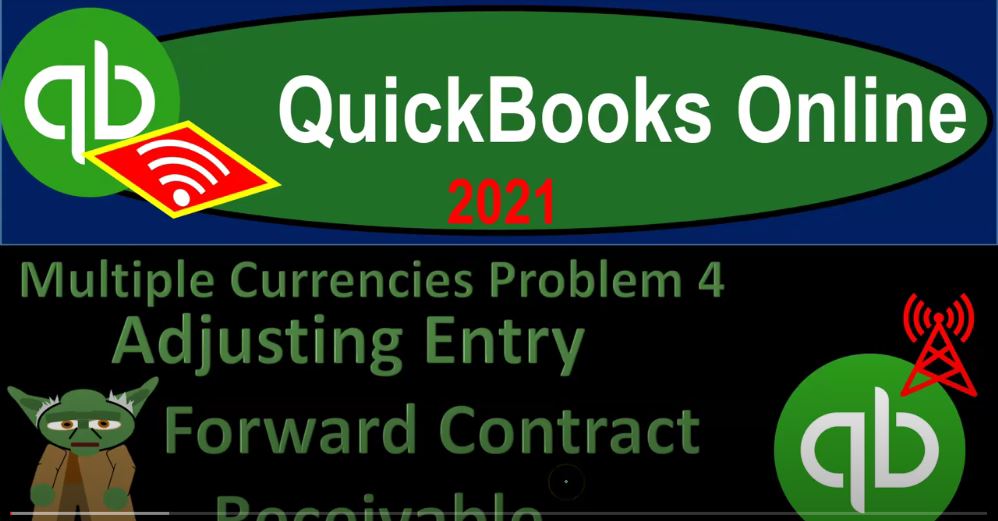 we’re now going to be opening up the financial statements duplicating some tabs to do so right clicking on the tab up top, duplicating it right clicking on the new tab up top and then duplicating it, we’re then going to the reports on the left hand side opening up the good old PnL the profit and the loss, we’re going to do the date range change up top from a 101 to zero to 1231 to zero and run it close up the hamburger hold down Control, scroll up just a bit to that one to 5%.

Then we’re going to go to the tab to the left of it down to the reports once again, this time opening up the BS balance sheet report, closing the hamburger up top scrolling up date range change from a 101 to zero to 1231 to zero and run that report. So on prior presentations, we made a purchase of equipment on account saying that we’re going to pay in the future. Not only that, but we’re going to be paying in foreign currency in Australian dollars when the home currency is the US dollar.

Therefore, we end up with this accounts payable that is in US dollars on our financials, but represents 100,000 foreign currencies we will be paying in the future that then exposing us to risk of exchange differences in the currency. Therefore, we then put a forward contract on the books, which means that we set up a receivable that will be in foreign currency, and then a payable that is going to be in the US dollars. So now it’s at the end of the time period.

And we have these two items that are going to be in foreign currency that are going to be future payments or receipts, we have the broker receivable and we then have the accounts payable, that was from the initial transaction, we now want to do the adjusting entries at the end of the period last time we did an adjusting entry for this accounts payable to then value it at the current date at the end of the period.

This time, we’re going to do that for the brokerage account, which is the receivable, which we’re going to receive $100,000 Australian dollars in the future. Let’s first do it in Excel here. Let’s do it in Excel. going on over to Excel we see that we are now focusing in I’m going to anello phi this one here. Because that’s not the one we’re focused on this time. And let’s put the little yellow file.on this one and let’s make it a green one, I like to make it green, yellow, it kind of stands out yellow phi that one.

So this is the one that we’re going to be working with that 60,900 that we have to revalue to the current period. This one is a forward exchange contract. Therefore, it’s a little bit different in that we can’t use simply the spot rate as of the end of the year 1231. But rather have to use the forward rate, the forward rate still a speculative rate to think about what the exchange rate would be, as of the end of this time period, which is going to be 331 of the second year of year two.

So that’s going to be the thing that will be a little bit different for it, we got to use that different rate, and QuickBooks will not typically have that rate, we’re gonna have to get that from the broker or the market to pick that up. So we’re going to take the 100,000, then 100,000 now valuing it at the current rate, but not the spot rate, but the forward rate, multiplying that times then the point 612.

These are just a practice problem rates here. But that would mean then that the Australian dollar has strengthened it can purchase $1 can purchase more US dollars. So what does that mean for a receivable? If it’s a receivable that we’re going to get paid in the foreign currency units and the foreign currency unit got stronger? That’s good. That’s good for us. And that’s why we put it on the books so it can it can mitigate the risk of the payable down here, which it was bad for. So that’s so it’s kind of working out like it’s supposed to right now.

So now we’re going to make that adjustment, we’re going to say all right, well that means that we’re going to debit then or increase the receivable and then the other side is going Maybe a game, which is what we’d expect, because last time we had a loss, and this one’s going to going to counteract the loss that we had last time. That’s why that’s kind of like why we did it. Let’s go ahead and then record it, this is going to be equal to I’m going to calculate it a different way, you’re going to put the brackets around this going to take the larger rate minus the smaller Nate rate, the point 612, minus 2.6.

Two, indeed it is, of course it is. And then the gain down here is going to be equal to the 300. So these two things are mitigating each other not a complete, not a perfect offset, because we had to use the different rates, one being the spot rate, the other being the forward rate, but still gives us a bit of comfort to mitigate the risk on foreign exchange transactions. Let’s do that in QuickBooks now.

So if we jump on over to QuickBooks, here’s me jumping jump, we cleared it, we cleared the hurdle and got over to QuickBooks. And then we’re going to go to the first tab, I’m going to hold down Control. And we’ll do a journal entry once again. So I’m going to hit the plus button journal entry, because it’s going to be an adjusting entry at the end of the period. And then we Last time, we said, Hey, you could like hit the currency down here, go to the Australian dollar and try to figure out what the exchange rate would be given QuickBooks would give us the rate.

Compare that to what we have in the books so far, and then figure out what the amount of the adjustment should be, you can’t do that this time. Because even if we were working in real time, this rate would not be correct, that rate would be the spot rate, or the exchange rate at this point in time, we need the forward rate. So we would still have to basically look up on the market, whatever the forward rate would be.

So there we have it. Note that we because this is not a receivable account, this time, we didn’t set this broker account up as a receivable type account, we don’t need to go with a name over here for a customer name. And we don’t need then to deal with the sub ledger, which makes it a little easier from that perspective, it’ll it’ll be a little bit more difficult. You’ll see where the problem comes in, when we when we finalize this, because we’ll simply have to do it with journal entries and letters instead of using the pay pay bill type of transaction or, in other words, the receive payment transaction.

But so there’s pros and cons to the two methods. In other words, this exchange shouldn’t have any impact because we kept it basically in US dollar. So we’re just going to do a do a, because we did the calculation for what the exchange should be for our adjusting entry. So I’m going to save it and close it, saving it and closing it. Let’s go to the balance sheet, see if it does what we think it should do by running it again to refresh it. So we’re working with a fresh report smells fresh. And then we’re going to go down and this is going to be the 61 two,

I believe that’s what it was supposed to be right we did that. Going into that item. There’s the 61 two, there’s our $300 adjustment looks exactly like I imagined it to be, then we’re going to go to the next tab to the right and make this a freshen up report by running it. And then now we’ve got the $700 in the gain or the loss these two things hedging each other out, or let’s just call it mitigating the risk, you know, going the opposite ways gain and loss, we put it into one account over here. If I go back then to our transactions.

On the balance on the Excel sheet, we put it into two accounts one for a gain one for a loss, typically, oftentimes we’ll net them together. So they’ll flip flop between a gain and a loss depending on whether it’s a gain or loss rather than having two accounts which can can really extend the balance. The income statement can get kind of long when you do that because then I have anyways we’ll put them in one account. So there’s the net nets out today. $700 So there we have it. Now let’s go ahead and print out the good old trial balance the trusty TB to see where we’re at at this time compared to the Excel worksheet. So we’re going to type in the trial balance.