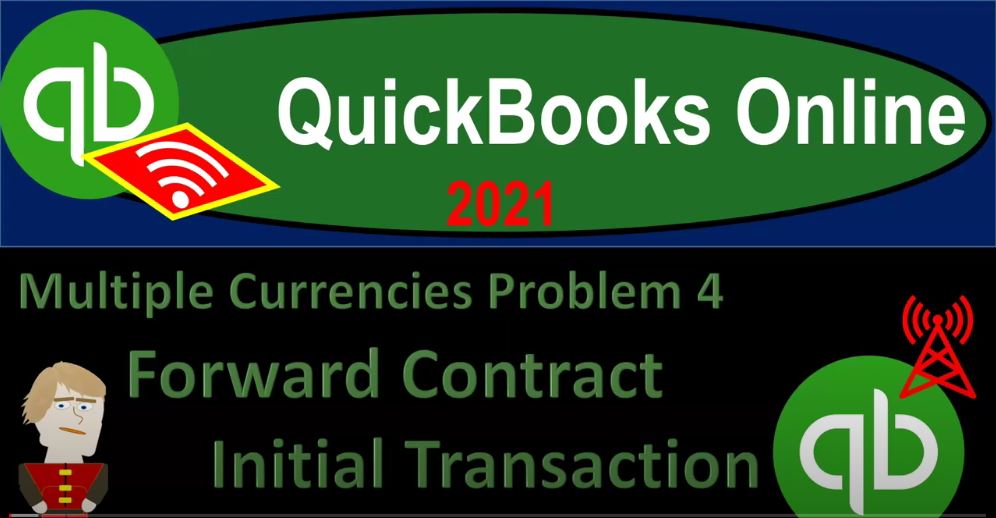 And then we’re going to go down to the reports on the lead reports on the left hand side, first opening up the profit and loss report the P and the L, the income statement will then do the date range change up top, let’s bring the dates back to a 101 to zero to 1231 to zero, we’re going to go ahead and run that report, and then close up the hamburger nothing going on thus far, holding down control scrolling up just a bit to get to that one to five, to the tab to the left, down to the reports on the left hand side, this time opening up the BS balance sheet report,

which is actually full of really good information despite the initials, then we’ll do the date range change up top, we’re going to then say a 10120 to 1231 to zero, let’s go ahead and run that report. And then we’re going to close up the hamburger. So last time we put on the depreciable asset on the books, and we’re going to purchase it with Australian dollars that we’re going to pay in the future, therefore we had an accounts payable, but we’re gonna pay in Australian dollars that exposed us then to a currency issue, if there was some kind of problem with or change in the value of the currency. In this case,

if the Australian dollar got stronger, then that would be bad for us. So now we’re gonna do a forward contract to mitigate the risk. Let’s first do it in Excel over here. So we’ll jump on over to Excel. And we put this depreciable asset on the books here and resulted in this accounts payable in Australian dollars. So this is a payable. And so we want to say hey, look, I’m kind of worried about about the exchange risk of this here. So we can mitigate the risk by saying Why don’t I do a forward contract? And then I’ll put a receivable on the books.

So we’re going to put a receivable and payable on them. Now what we would like to do to make this like a perfect kind of system was is to put the receivable and the payable on the books at the same calculation using the spot rate as we did with a depreciable asset, you would think that would be the case, but the broker is not going to let us do that the broker is going to say no, because although that’s the current exchange rate, people are speculating that in the future 180 days from now, it’s going to be something different than that.

So you got to use the forward speculative rate. And so that’s what we’re going to do. So in other words, we’re setting up our forward contract to be paid the payable and receivable to be paid off in the same time period that we expect to be paying the accounts payable. So they’re kind of overlapping each other in timeframe. And then we got to put this one on the books, however, using the forward contract, because this one will become due on 330 1x.

Two, and the exchange brokers basically saying you got to use what we believe based on the market, what the exchange rate will be at that time. So this is where it’s a little bit different. So we’re gonna say this is going to be equal then to the 100,000. We’ll put this 100,000 Australian dollars times not the spot rate, but the forward contract rate. And now and so that’s going to give us then, did I pick up the rent? Oh, yeah, the 60,900 60,900. There’s the debit and the credit. So if we put this on the books, then we’re gonna say now there’s a debit for the 60,900.

And we’ve got then the credit down here on the payable for the 60,900. So you can see it’s not a perfect match, because now we have this item in Australian dollars here, this payable and then this receivable and Australian dollars, and they’re not exactly you know, the same because we had to use those separate exchange rates. But if there’s a drastic and unexpected change in the rates, then this should provide us with some mitigation because if, for example, the Australian dollar got a whole lot stronger compared to the US currency, then our receivable contract will turn out to be good,

we’ll have a gain there. And we’ll we’ll have a loss that will be netted out on our payable that we set out. So that’s how that basic concept will work because we have a payable on the books that we’re going to be paying in foreign currency, we can set up the forward contract to have a receivable receivable on the books that we’re going to be paid in foreign currency. And that should mitigate the risk that we will then have note that we’re not calling it a hedge at this point, just the mitigation of the risk. If it was a hedge, particularly, then the accounting for it might be a little bit different.

And we could set it up once again as basically a receivable and payable, which doesn’t have the currency items here, but would be driven by the customers and vendors which would then drive the receivable and payable accounts for the foreign currency that would help us out to close out the transaction, because then it would do that calculation for us to close it out. But it might be a little bit more complex to put on the books, because typically these will be put on the books with something like an invoice and a bill if it was a payable.

we don’t have a beginning balance in place. So we’re going to save it and close it. So there we have that one, then we’re going to open up the other side, I’m going to say new, and this is going to be a payable, which once again, we could just set up an accounts payable, but then we got to do a sub ledger and all that kind of stuff. So I’m going to say other current liability for the for the broker account, we’ll make it an other current liabilities account, I’m going to call it broker. So broker accounts payable are listed as let’s just call it payable, payable.

And then this one is the US dollar accounts, this one will just be endorsed. So let’s go ahead and save and close that. And then I’m just going to put this on the books as journal entries, this will be the benefit of having it as just journal entries, I don’t have to put like an invoice or deal with a deal with the sub ledgers. In this way, I could just enter a straight journal entry for this item. So we’re just going to say let’s journalize. And we’re going to put this on the books as of 12. One, I’m going to say 1201. I’m going to put Oh, the our first year is going to be 2000.

And as a 12 one, then we’re going to be debiting, the broker receivable broker receivable. And that’s good, I’m going to put it in Australian dollars, it should then do the do the exchange for us 100,000. So I’m putting it in Australian dollars. This time, we might want a description, I won’t put one here though, we don’t need a name. Now as we would need if this account was set up as an accounts receivable type of account, because we don’t have to deal with the sub ledger that we normally would have to if it was an accounts receivable type of account, then the other side is going to go to the broker payable. So the broker payable account, there’s the 100,000.

There, once again, we don’t need a name as we would if it was an accounts payable type of account, because it’s an other current liability type. So there’s the 100, the 100, there’s our 60,009. There’s our 60,000 at nine. Note that it’s possible that because we’re using journal entries, if you just recorded this in US dollars and recorded basically your own exchange, because again, we’d have to calculate the exchange anyways, of the 60,009. And 60,009. You know, you’d be in the financial statements would have the 60,009 in it, in either case, but this could help us with that calculation for it.

And, but even still, again, we’d have to put in the actual rate, because QuickBooks wouldn’t give us the forward contract rate, but only the spot rate. So let’s go ahead and save it and close it. So save and close. And then we’ll check it out. Now note what happens when I save it and close it here. If I go down to the to the accounts receivable account, then it actually gives us or the broker receivable, it gives it the amount in Australian dollars, which is a little bit different. It’s saying hey, look, that’s us 100,000 Australian dollars,

whereas when we when we go to the financial statement, it’s going to give us the US dollar equivalent of it, which will be that 60,900 I believe it was, let’s check that out. Let’s go to the so that’s like a little bit, that’s a little bit of a difference if we assign it to a foreign currency account, or if we just you know, do the journal entries. And so I’m going to go up top and run the report, hold down Control, scroll up just a bit. So now we have the broker account on the books at the 60,900. So now notice, it doesn’t say 100,000 units, because we’re talking 200,000 units that we’re gonna pay in the future of Australian dollars,

but we have to put it on the books in the US equivalent. And then the other side is in the is in the broker payable which is just in the US dollar which should be USD not UDS. Let’s fix that, see if I can, I’m going to go to the first tab and see if I can fix that. Because that might bother some people, it kind of bothers me even. And I usually don’t get bothered by that stuff at all, really. So then I’m gonna go over here and edit it. And let’s call it US dollar, US dollar, and then save it back to the balance sheet, where it should be fixed and relieve people’s bothersome pneus from that. So there it is. I’ll bother people in other ways, I’m sure.

So there we have that. So it looks good. And so now let’s go nothing is happening to the income statement thus far. Let’s go ahead and print out our trial balance and check that out. And so we’ll hit the drop down or the burger hamburger. We’ll go to the reports. And check out the trusty TP the trial balance. And we’ll do the date range change up top from a 101 to zero to 1231 to zero we’ll run that report, close up the burger. And then just check this out.