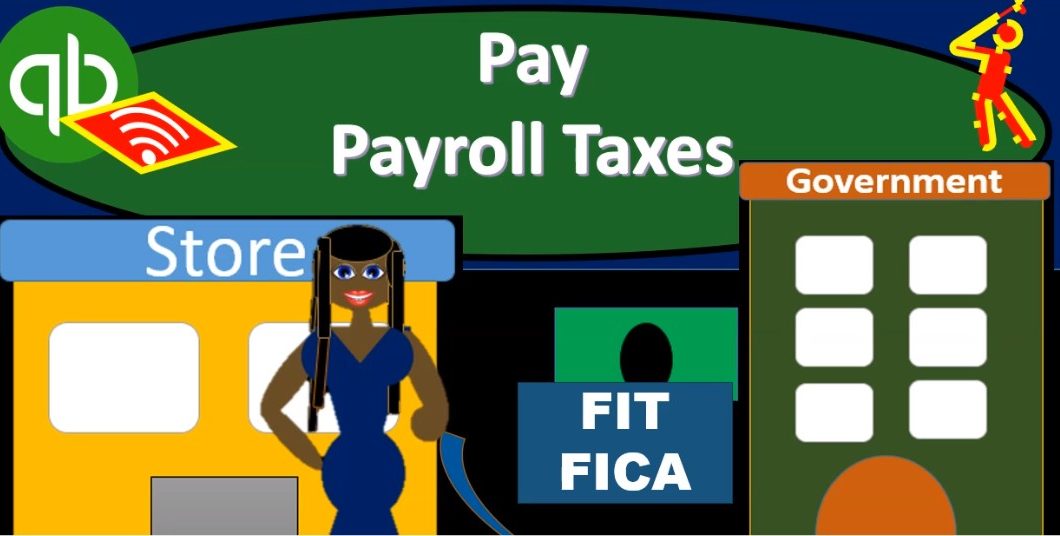 Then we’re going to go up top and duplicate the tabs, I’m going to right click on the tab up top and duplicate it. And let’s close the hamburger up and I’m going to hold down Control and scroll up just a bit up to that 125 that’s the nice spot. Now I’m going to go to the QuickBooks desktop just to take a look at our flowchart in the desktop. So I’m going to go to the desktop. And if you think about the payroll food What typically happens, you could enter the time but that’s not required. You could run the payroll, if it’s just salary or something or half time outside, then you’re going to pay the pay employees, that’s going to be the major portion right there.

You pay the employees when you pay the employees, if it wasn’t for all the laws and whatnot and tax withholdings, it would be a simple transaction, just like any other expense, you would simply pay cash goes down, and then wages expense or something like that would be the other side. However, when we do this transaction, we know that it’s much more complex like that, then that in the head, we have things like the payroll liabilities, we have to take out of the paychecks at the minimum, the Federal withholdings, federal income tax, Social Security and Medicare, then possibly state taxes, possibly other benefits and so on and so forth.

They come out at this point, then once that they take once we take them out of the paycheck and we pay our portion of the payroll taxes, we then have to pay the liability. So that’s what we’ll think about now. So last time last month, in the month of January, we processed the payroll, we withheld some of the money from the employees as well as became liable for our portion of the payroll taxes. Now in February, we’re going to be paying the liability for the month of January. Again, when is the liability due just like with the sales tax, it depends on on how you know where you are, and how much payroll payroll taxes basically, you have. But the system will basically work like that, in that just like with the sales tax, you will be generating the payroll, our payroll basically is on a monthly basis.

We will give an example of that in a later section. But we don’t want to add payroll because it’s an added cost in this practice problems. So we basically are assuming that we have payroll calculated by by an external payroll professional companies such as ADP or paychecks, then we took that information that they gave us and we entered it into our system. So it looks something like this, you would get a register something like this that we could enter into our system. We have two employees. We had the payroll on the gross pay, then we withheld from them these amounts. This is what we take took from the employees, we took it out of their paycheck in order to pay their payroll taxes.

So then, if I go back to our report here, that’s what we owe. So we’re in February right now, we haven’t processed the February payroll. Therefore, the only liability that is still on the books is applied or relating to January. So we’re going to pay this January liability that was generated in January, we’re going to pay it in February, and then in a future presentation will process payroll for February, which will result in another liability Which we would then pay in March. But we’re not going to go that far in our practice problem. So if I go back to the first tab, if we were processing the payroll through QuickBooks, I’m going to hold down Control and scroll down a bit to get back to 100%.

Now remember, don’t let the term or the name of the form of an expense throw you off because we’re not actually recording and expense here. We’re going to be recording I’m going to choose the other reasons. We’re going to be recording something to a liability account, decreasing the liability The expense simply just means this is like a check form. But it’s not really a check because of some other transfer possibly that happened. Therefore, we don’t need a check number in it.

So I’m going to pick up the 150 415 forum and then We have part of a pay one more time on this payroll liability that I didn’t spell it right payroll liability. And this is going to be for fit or federal income tax, not ours, but the amount that the employee owes that we withheld for them. And that only includes the amount that was taken out of their check, we don’t match the federal income tax, that’s their tax. It’s not Social Security, Medicare, which we do match, that’s going to be 830. So we’re going to say 830 830 on that, that adds up to a total of 1005 98. So that’s going to be the 1005 98, which is the total that we owe, which should be all of these. And this 1005 98 looks good.

If we select that item, then of course we’re going to go to that expense. It’s not actually a check, but it’s decreasing like a check and expense. Closing that bag out. We’re going to go back up top and we’re going to go back to our TB trap balance and then we’re going to see the other side which went to the payroll liabilities now at zero. It’s still there because we had activity during the period which is nice because we can use the AutoZone feature to zoom in on it. And we then see the three components that we broke out for Medicare, Social Security and fit federal income tax.

If we select any one of them, it will show of course, that one expense item where we recorded all three, closing this back out, going back up top, and I’m going to go back to the trial balance. This is where we are at at this point we will be printing out the trial balance so you can check your numbers as we go.