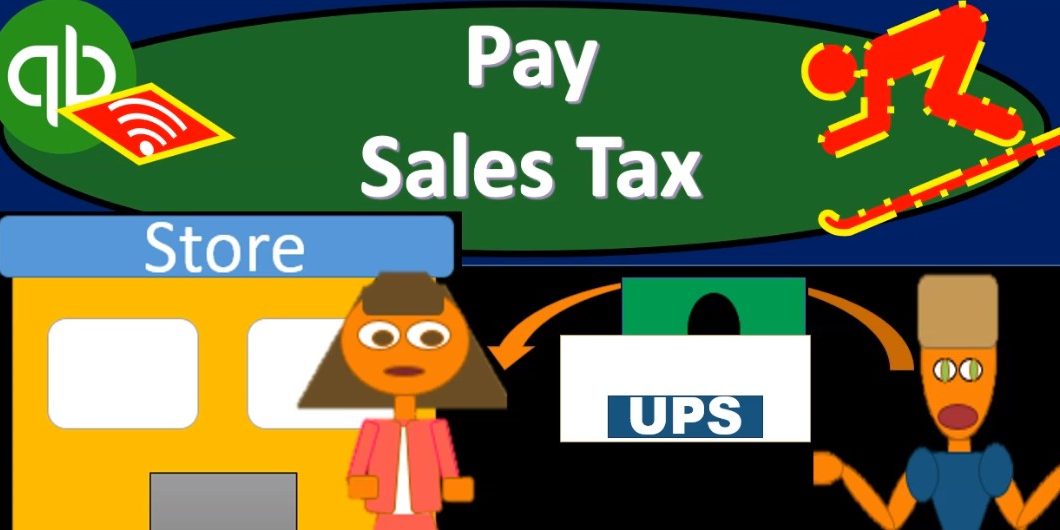 This presentation and we will take a look at the calculation and payment of sales tax. In other words, we’ve made sales within the system that is required to have sales tax on them. We’ve been calculating the sales tax. Now we want to make a payment for that sales tax. Let’s get into it with Intuit QuickBooks Online. Here we are in our get great guitars file, we’re first gonna go down and take a look at some reports. So we’re going to go down to the reports down below. Let’s first take a look at our trial balance report. 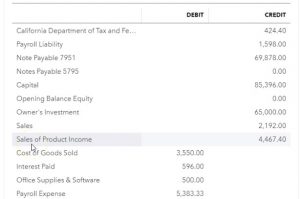 So we’re selling products, we have the taxation on the product. So if we open up this item, then we have our invoices here and our sales receipts. These are typically the ones that we’re going to be subject to sales tax. If we open up one of these invoices or sales receipts, we can see how the calculation of this of the sales tax is being done. We’ve seen this in the past we’ll do this fairly quickly. Here’s the invoice. If we scroll down below, I’m going to hold down Control and scroll down to 100%. So we can see this better. We charged 400 $500 for this particular item for this guitar. And then we have to pay the state in our case California, the sales tax which is calculated by the system which is nice. QuickBooks is very nice to helpful for that. At 4750. So this 4750, then, is not something that we get to keep. It’s not part of our sales, it didn’t increase our sales item, it went directly into a liability.

So it’s kind of attacks, you can think of it basically as a tax to the consumer, even though we’re kind of a middleman as the business that has to collect the tax. So therefore, it’s not going through sales. It’s not like a sales, not increasing our sales, and then an expense when we pay it. Because it’s really supposed to be a tax directly on the customer, I say supposed to because in obviously in real life, it affects what the sales prices and all that kind of stuff, but it should be on just on the customer. So that means that that we really only charged the 500, the customer has to pay the consumption or sales tax of the 4750. That’s going to increase the liability. So if I close this back out, then we’ve been doing this every time we make a sale that’s subject to sales tax. If I go back up top, and I go back to our transaction, our trial balance I’m going to hold down Control scroll back up, that sales tax then hasn’t been affecting the income statement, it’s been going into a liability account. We could call it sales tax payable.

QuickBooks will basically name it based on the agency that we’re going to owe it to. So QuickBooks is smart enough to kind of know the agency and help us out to be able to track it and then track it per agency per region, because the sales tax is a state tax for the United States, as opposed to a federal tax was not a blanket attacks over the whole country. It’s just subject to you know, states have different sales tax and local local areas have different sales tax as well. So we’ve been accumulating up then 424 40 of sales tax. So this is something that we owe. Now, the question is, well, how do we pay that like, what’s the process for paying him? Obviously, we’re not paying it at the same time we collect the sales tax, because that would be too difficult, right? We’d have to basically pay out the sales tax right then so how, how and when do we have to pay this thing Now it depends on the on the state you’re in and whatnot. 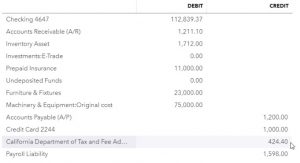 When we set up the sales tax, you’ll note that it asked us some questions, you could go back and take a look at the setup process for sales tax in a prior presentation. But it asked us some questions on what the region is, and then how much sales tax we collect will typically determine whether we have to report sales tax like yearly or quarterly or monthly. Now we put in into the system monthly just so we can kind of practice the processing of the sales tax. So for In other words, you know, if we had sales tax for January for January here, you would think it would be reasonable then that I wouldn’t have to pay the sales tax that we collected until possibly the end of February.

Again, you can have that lag that could be it might be the case that we only have to pay quarterly three months that we have to pay at the end of, you know, March that we would have to then collect and pay and we would make the payments sometime in April. Right. They’re going to pay it after the period in which the sales tax was was generated. 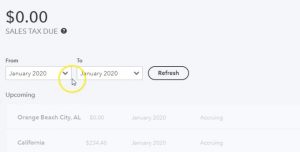 So even if I pick, therefore, because QuickBooks is calculating sales tax based on the current date, and this is the sales tax being calculated, we can’t use their kind of automated system as we could in practice, in practice, if we are running QuickBooks in real time, then we could we could use this system to basically help us to calculate the sales tax and so on. So what we’re going to do is just show you, you know what, what the system is and then we’ll just manually record the check. It will record the payment.

So then we need the other category, the other category is going to be down here under the categories, and it’s going to be decreasing the liability now, it’s not going to be an expense even though we have the expense for up here. This is basically just a check kind of formed when we don’t have an actual check some kind of other transfer, electronic transfer or something like that. So don’t let that throw you off. We’re not going to be choosing any expense here, we’re going to be choosing that liability account, which we can do with the drop down or we can be typing in the California Department of tax and fees administration.

That’s the vendor to so So note that we have the same person we’re paying here we’re going to say that’s who we’re paying. And they also chose that as that’s also the account. Because QuickBooks for some reason, put that on the actual trial balance as the account that’s the account instead of just calling it what you would think would be called which would be like sales tax payable or something like that. You’re to see there, but they put the who you owe the vendor and essence on there. So then we’re going, we can have the description, we could say, Hey, this is sales tax for Jan, you were. And the amount is going to be whatever is on a trial balance right now, which is the 234 14. That’s only for January two, to 344023440.

All right there, we have that. And that’s all we need, what’s going to happen when we record this, it’s going to be decreasing the checking account. And it’s going to be decreasing that liability down to zero for the end of January. But we’ll still have a liability in February for the amount that had accrued upwards so far for sales made in February. Let’s check it out. We’re going to say Save and Close. And they’re not going to let me attach this to the liability account because I’m not going through their system for the sales tax liability for the California Department.

All right, let’s take a look at it. We’re gonna say Save and Close. And so there we have it. Let’s go to the trial balance and see what happens then now I’m going to go back up top in the trial balance and change the ending date to the end into 1231 to zero so now among the two months, not just to the end of January. We’re going to run Run that report. So we’re going to run that report, then take a look at the checking account, if we go into the checking account and scroll down, we have the amount that was paid on the 27th. So there that is. And so there is the amount of the 234 40. Then we’re going to scroll back up and take a look at what the other side is, I’m going to go back to the trial balance, we’re looking for the liability account.

So if I go down, and we have the California Department and so on and so forth, there’s the total total liability that’s for two months here. So that’s for two month time period, at the 4440. We paid for one month of it, which is the 234 40. So if I was to then subtract that out, that’s what this this is a contra account then to the California Department because they wouldn’t let us post there without going through the system, which we couldn’t do right. So we’re going to say this is the 44.4 minus 223 4.4. That’s how much is still owed for the month of February that’s been accumulating up for the month of fifth So if I go into the California Department then and I make this a little bit smaller, so that we could see everything on a page here, it’s a little, it’s pretty small. And if we scroll back down, if you look at the end of January, which starts here, that’s the end of January, there’s the 230. For the 234 40.

That’s the amount we paid, we paid off the amount of January. So then the amount that’s going to be left is the amount that was accumulated upwards for February, which we’re going to pay in the month of March. So if I scroll back up top, we go back to our, our trial balance, and I’m going to make this a little bit larger. So just to emphasize that one more time, if I change the ending date up top two, or one or one to zero, I’m sorry, let’s make a hit a 130 120. Run that report. 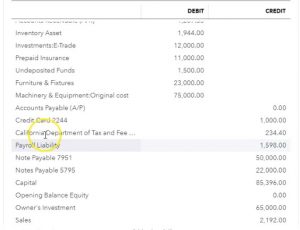 We see then that the amount that’s due is the 234 point four, that’s what to do as of the end of January. We paid that in February. And then if I scroll back up top and make the Indian date 1230 120, or the end of February would be fine too. Then we see the amount of the 442 440. And then we paid indicated by the Contra sales tax account of the 234 40. And the difference between the two then once again, that 44.4 minus 230 4.4 is the 190 that was accumulated in the month of February that we will be paying in the month of March.