This presentation and we’re going to record the receive payment and make deposit forms. In other words in prior presentations, we recorded the invoice billing the client. Now we’re going to receive the payment for it, take those payments to the bank and record the related deposit. Let’s get into it with Intuit QuickBooks Online. Here we are in our get great guitars file. Before we move forward, let’s take a look at our flowchart. This is in the QuickBooks desktop version. And we just want to see this scenario the story that we had, as we go through it starts off with someone came into the store, they’re looking for a guitar, if they didn’t have we didn’t have the one they want and the right color.

So we ordered a custom one for them with a purchase order. We took that purchase order and then receive the guitar from the client specifically for particular customer within populated the expense form that we paid for the guitar recording the guitar on the books, increasing inventory, decreasing the cash at that point in time. Then we populated the invoice we turned around and took that guitar that we purchased specifically for specific customer We made the invoice hoping it to be populated from the expense report that we made. And now we have the invoice and now we’re down to our standard kind of process down here now we’re at our invoice, we’re then going to receive a payment, we expect to receive the payment in the mail. And you can imagine over here at this invoice spot that we took the guitar, put the bill on it, shipped it out, then we expect to be receiving payment. 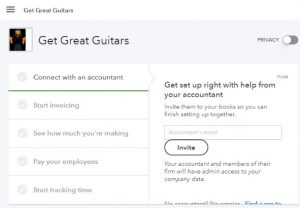 Because I think they’re just thinking this is the most descriptive name, you know that they have in the processes, they got an invoice and then you receive the invoice payment. But when you go into the receive invoice payment, you’re pretty much they’re pretty much stuck with still calling this a receive payment form because it’s been bad for like ever. So it would be very difficult to change that. So it’s going to be called basically I’ve received payment for typically, now this is going to be Anderson, we got a payment, we got a payment in the mail from Anderson from that guitar we sent them. So it’s going to be Anderson which we could just pick that one or type in Anderson and then type that and then tab and that’ll populate the invoice down below.

However, if you’re in a situation where you’re basically just going to take that check and scan it into the bank, one by one, and the bank’s going to have each deposit groups one at a time, then you could just deposit it directly in the bank right when right when you receive the check. If however, you’re going to take all the checks and cash and whatnot that you have received, go to the bank, group them together, put them into the bank in some type of group fashion, then you want to go through the undeposited funds to link up the grouping to the how you’re going to see it on the bank statement so you can reconcile, then I’m going to check off the item down below below. That’s going to be linking the invoice which will actually populate the amount received up top.

If we got anything other than the full amount that should be received, in this case the 448 9098 then we can put that amount in and calculate. It’ll calculate difference for what has not yet been received. Alright, now we’re going to record this and sleep think about what’s going to happen, what’s going to happen with a sale, it’s a receive payment, therefore accounts receivable is going to go down. Whenever you see a receipt payment form, you’re thinking, Okay, someone owed us money, they now paid us AR is going to go down, the other side’s going to affect cash in some way, you can either put it to the checking account or as we are, which is the default or typically what QuickBooks recommends first going through undeposited funds. And that’s going to be the undeposited funds account here. So that’s what we’ll do, we’re going to say Save and Close. And then let’s check that out. We’ve seen this before.

Also note that of course, this doesn’t give us the detail on particular customers who owes us the money that for that we would go into accounts receivable or customer detailed reports or customer summary reports, both, you know, detail or summary. And that would give us the information on who owes us the money. I won’t do this this time because we have seen that in the past. Alright, so that was fun. So let’s do it again. We’re going to go back to the first tab, we’re going to go to add another one. We want to be down here in the receive invoice payment again, note the difference in name. This one’s just received invoice payment. All right, receive invoice payment. And this is going to be for Eric music.

So we’re going to say the full invoices paid. What’s going to happen when we record this sales receipt, we know that the sales receipt is going to be decreasing the accounts receivable, that’s the first thing we want to think of when we see the sales receipt the other side go into some kind of cash either the checking account or as we have it here undeposited funds. Let’s record it and check it out. So I’m going to say Save and Close. Then we’re going to go to our trusty trial balance that we are now in the second tab and the trusty trial balance going to make this a little bit larger. So we can see We’re in accounts receivable, I’m going to open up the accounts receivable, scroll on down through it and we should then see Eric music there is Eric music, there’s the payment, that type that we have. And that’s for the decrease of the 547 50. Scrolling Back up, back to our detail back to our trial balance, the other side then being in the undeposited funds, which is an asset account, so it’s gonna be up in the assets is basically cash but not in the cache section.

Now if we were doing some other type of deposit, we wouldn’t be using this top section but the bottom section here where we can just put up deposit directly in without going through the receive payment and invoice. process or the sales receipt and simply hit an account. If for example, we the owner put a deposit in or something like that, in those cases, recall that I would typically use the register go directly to the register will, which will still create a deposit form. But I think it’s a little bit easier if that’s the process you’re going to be doing to use the register, would you go and go through the sales receipt and so on and go through undeposited funds, then it’s useful, that’s when I would typically be using or going directly into the deposit screen for the data input.

We have the 996 45 here, what’s this going to be doing? Of course, it’ll be increasing the checking account, it is a deposit, the other side will be decreasing that undeposited funds basically they’re holding account the cash kind of holding account, until we put it into the checking account, it will group it into the checking account at the full amount of the 996 point four five because that’s what we expect to feel to see on the bank statement from the bank and therefore be able to reconcile for it on the undeposited funds account. However, We’ll list the two accounts separately, so that we can see the increases and decreases increases from things like the sales receipts and the receive payments decreases from the deposit form.

Let’s go ahead and say Save and Close and take a look at that. We’re going to say Save and Close and then go back to the trial balance. Now in the trial bounds are going to make this a little bit larger scrolling back up again, back to the 125 or so 125. Then I’m going to go into the checking account where we should see that deposit scrolling down to the deposit on 128. There it is, notice both amounts are combined, you see the full deposit after 996 point four, five, so it’s combining them together. That’s how we expect to see it on the bank statement, although that deposit consisted of two separate items, closing that back out. Going back up to the top. Let’s take a look at the other side which is going to be decreasing the undeposited funds account. 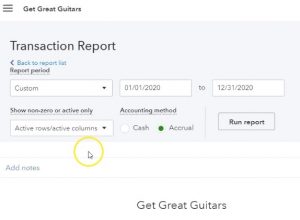 So we’re looking for the undeposited funds, which is also an asset account up top so we’re looking here on deposit difference, it’s at zero. However, QuickBooks still puts it on there, which is nice because that allows us to do the auto zoom thing to see the detail for him. We go on that item will see down below that we have the deposit here and a deposit here on the 28th. And so it’s broken out into two separate deposits, even though it’s on the same deposit sheet. Why? Because that allows us to do this tick and tie thing that allows us to tick and tie the increases and the decreases so that we can basically tie them out.

So if we went to either one of those deposits, then if we go to one of these deposits, which was let’s say this bottom one was on the 28th. It was that like this one, that one’s at 547 50, the full deposit was 996 45. So we’d have to then go to the deposit screen to see what the actual deposit was that was going to appear on the checking account side or on the bank statement side. And then in the undeposited funds, it’s going to be breaking those deposits into the related cavity So we can match them out.