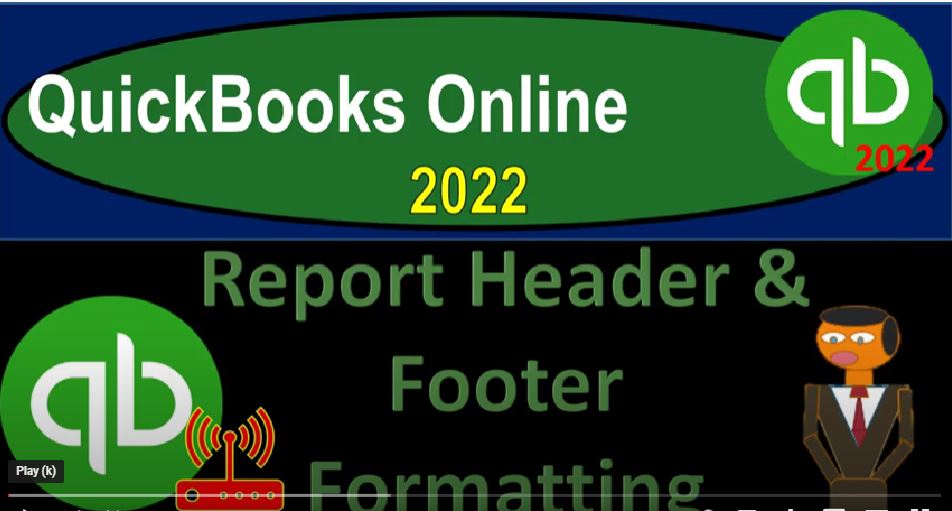 We also have the free 30 day trial version open just so we can see the difference between the accounting and business views at this point in time, if you don’t have access to this app. Now. That’s okay, because we’ll be using it more in this second half of the course.

Again, as that is thinking, I’m going to go back to the 30 day trial version just to note that if you’re in this business view, as opposed to the accounting view, the reports are in this business icon. And then you’ve got this nice little little drop down category. And then you go into the reports area here.  And if you’re in the accounting view, which is also a here as well, if you hit the cog, you can switch to the accountant view.

And if I go back to the prior folder, which is in essence in the accounting view, we’re now in the second tab over, we would then go to the reports on the left hand side, we’re going to be opening up one of our favorites, the balance sheet, report and then we’re going to change the date up top  Oh 101 to one to 1231 to one, run it close up the burger hamburger that is go to the tab to the right of it back down to the reports on the left,

this time opening up the income statement or P and L Profit and Loss Oh 101 to one to 1231 to one on the range change running it close the hamburger item to the right now,  one more time reports this time the accounting report of the trial balance which I’ll typically just type in the typical type in. And then we’ll pick that one up.

So within the header and footer options, we’ve got the logo, so if you have a logo set up in your in your system, in other words, the logo would typically be if I hit the show logo, do they have a logo on this report, they may not have the logo here, but if you go into your icon up top, and you’re going to go into your account and settings, then your logo, where does the logo go, the logo would be in the company area, and you can upload your logo right there.

So let’s just do that real quick if I was to edit this and add a logo, so I just added a random picture here and save that. So now we have our logo instead of a high go it’s a logo, because it’s not high, it’s a low one. So I’m going to close this out. And then now we’ve got our logo added.  And if we were to preview the printing now, let’s first turn on the logo. If I customize, I make sure I got my logo turned on here, and then I ended I look at the print preview by going to the printing tab, then the logo has now appeared.

There it is I’m going to close that back out. If we turn that off customizing up top and we turn the logo off, then run the report then no logo, no logo if I print the print preview, no logo.  Alright, so we’re going to close that back out we’re going to customize again, and then scroll down into the header and footers, we got the company name, so we might want to put something different for the company name for example, and from time to time maybe you want like incorporated at the end or something like that. That will adjust the company name up top here.

You can also adjust that by simply clicking on the company name and adjusting that here, you can also just the balance sheet item here, as well. And that might be more useful on the income statement, because the income statement is called the profit and loss here. So if you want it to stand out a little bit from other people using QuickBooks Online,  you might then just call it an income statement.

Income State meant, and that’s one way you can adjust that, you also may well need to adjust this second line when you do the comparative income statement. So when I were compared to reports in general, so if I was to hit the drop down, for example, and look at this on a quarterly basis, then I might want to name it, you know,  a quarterly income statement or something like that to indicate and you can change it there, you can’t change the date, which is kind of frustrating, because it would be nice if you could basically maybe even remove the dates since you have the date ranges on down below.

But we’re going to go back to the first tab, let’s go back up into the customization again, and then go down to our header and footers.  So here’s where you can change the balance sheet item here as well. Once again, we can do it either on the report itself, or up top, you can remove those two items, if you don’t want them by just unclicking them. And then we’re going to say or, okay, run it. And so now we don’t have the headers at all.

So then we can we can run that that does remove the report period. Okay, so we can’t change the report period. But we can remove the port report period, which could be nice. Once again, if you had something like a comparative report here, jumped over to the income statement, where you’ve got the dates up top, and this period might not then be the correct or most relevant period. So you might then go up top and say,  Okay, I’m just going to customize the report and remove the period altogether.

It’s not needed, it’s not helpful. And it’s possibly harmful, and therefore removing it confusing. It’s confusing. Back to the tab to the left, going back up top, we can customize it again. And we can put the period back. So let’s say that period has now returned to us, it has returned from Limbo reappeared, and is just as good as it was before, no problem.

So then we’ve got the date, the date prepared, the time prepared, and the report basis. These are items that will show up. When you print this let’s let’s look at the print preview. And see see these items date time and report basis, I’m going to I’m scrolling, holding CTRL and scrolling down.  And then down at the bottom.

We’ve got Thursday, January data and so on down here. So you could remove that by going up top and said I don’t want that. I don’t want that on my report. So we’re going to say let’s get rid of the date and the time. And we already have the report basis gone. Let’s turn on the report basis just so we can see that change, run it.  And then we’ll go to the preview again, scroll down to the footer area to the footer of it.

And also note that you have that that edit titles area, which might allow you to change some of these items. But this this is a little little sticky to me still not working completely, properly all the time.  But it could be useful because remember that some of these titles that you’re looking at within the reports are basically they could be either financial reporting titles that are proper for financial reporting, but sometimes they use like I said,

Say the bank accounts instead of like cash and cash equivalents or something like that.  And so sometimes it would be nice if you can change those, especially down here, for example, the the equity, if you could call it owner’s equity, or you know, something like that stockholders equity partnerships, equity or something that could that could make it a little bit more formal, you might be able to do some of that stuff here.

Now, you are somewhat limited to some of this formatting options.  Of course, within the system, you have more options if you were to export the report. So one way you could do this is export to Excel. And then you have of course, a lot of formatting options there. However, if you were to use a system like that, then you would have to make sure that you’re consistent to export to Excel, and then do whatever kind of added formatting you want to do within within Excel.  So you got another step that would be in the process.

But for some of your formal type of reports, remember that if you’re reporting to this for external use purposes, you might have a standard set of format reports that you want to do on a monthly basis, on a quarterly basis and on a yearly basis.

And you want to form them as nicely as possible, whether you give them to a supervisor or to a client, because the presentation is going to be part of the part of the whole package. And if you could do a couple things, just to make your reports look look a little nicer or stand out a little bit. Then a little a little change. A little customization can go a long way.