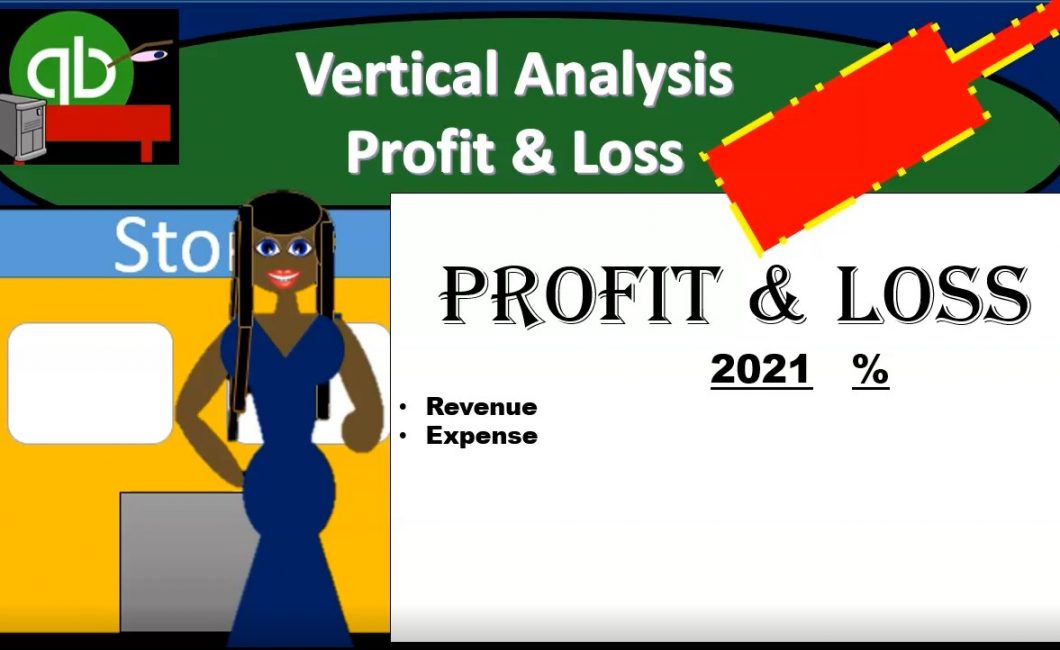 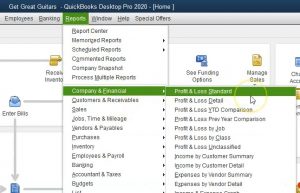 The reason you would want to do this is because the income you can think of it’s basically the goal of the organization, the goal or the main number on the profit and loss report. That’s what the company is trying to do generate revenue. All other things, including expenses are there in order to help us to generate revenue. So therefore it can be useful for us to think of all other items as they are related to the income item or the revenue item. 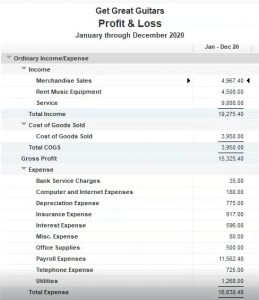 This is also something that will be very useful to us if we want to benchmark or compare to other types of companies, companies that may have different dollar amounts. In other words, they might be a much larger company that we want to benchmark to, we can’t do so with the numbers in straight dollar amounts, because they won’t be something that is comparable to us, then we won’t be able to draw information from that however, we may be able to use this percentage kind of format, in order for us to draw information help us to benchmark to other types of organizations. 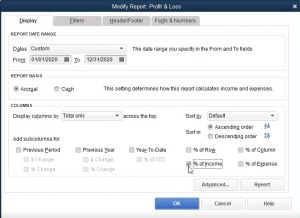 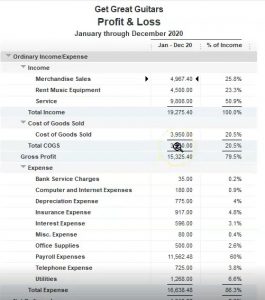 So you’ll note obviously, if we take the percentages, it’ll add up to the total. In other words, if I took the merchandise sales of the 497 9.4 divided by the total income of 19274 5.4, move the decimal over two places, we have 25.8%, rounded 25.8%. So these these are all the income types, if you add up the income accounts, they add up to 100%. The cost of goods sold then is an expense type of account. If we compare it then to income, if we take this cost of goods sold and say 3950 divided by 1927 5.4, we’re going to get the if you move the decimal over two places 20.5%. So cost of goods sold is 20.5% of the total income. And usually that’s going to be a really important relationship.

Not it’s a little bit skewed here, because note that we have more than just merchandise sales, we have other sales here. And the cost of goods sold is not going to be have the same relationship to service items as as the inventory items, then we can do this with any of the expense accounts down below. If we were to take for example, obviously payroll is quite large expense account 1156 2.48 over the revenue of the 19 to seven 5.4.

We could say wow, that’s going to be if I move the decimal point around 60% of the income. And you could see that relationship on a percentage basis. And again, you can think of that, well, what if I looked at another company that also sells guitars and has service and they might be larger than us, we can’t compare our revenue item to them. But as their revenue items 60% or is their payroll 60% of their revenue is their cost of goods sold only 20% of their total revenue, we can do comparisons like that and help us to benchmark and so it’s a really useful tool to have. Now we’re going to make some other changes here. 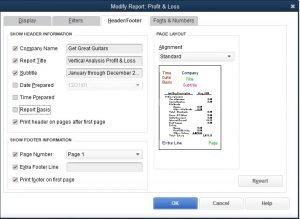 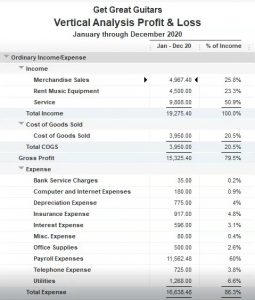 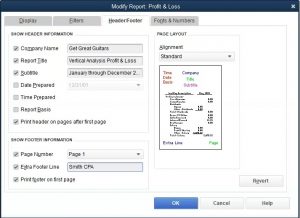 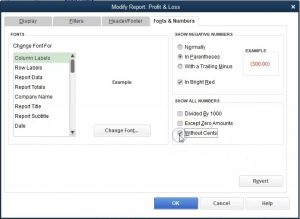 We did that last time. Let’s now do that over here in the customized reports, we can do that in the default, we want to go to the totals, and then I want to put it in descending order totals and then descending order, then I’m going to say okay, and there we have it. So now we’ve got the higher numbers up top, and then it goes down to the lower numbers. So that’s what we have. So far. Looks pretty good. Looks pretty nice. Let’s go ahead and memorize this report. So I’m going to go to the memorized report up top, we’re going to change then the name actually looks good. The vertical analysis profit and loss. 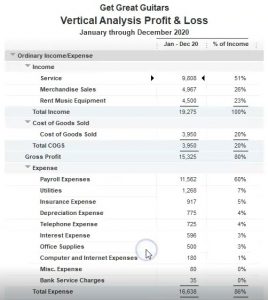 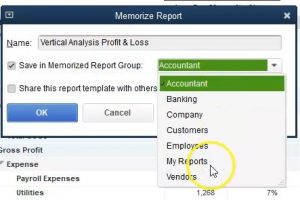 Now we’re going to go ahead and save this in a couple different ways. We’ll save it as a PDF file will then export it to our existing Excel worksheet. And then we will save all of the reports we have done so far in one PDF file using that Excel worksheet. And let’s do that now we’re going to go to the reports up top, I’m going to use the Q to predict PDF printer this time by going to the Save as a Actually, let’s do that again by going to report print reports.

Then we’re printing to the PDF printer, then I’m going to say print. And we’ll get the dialog box of where we want to put it. I were in section one through four, I’m going to go into the financial statement reports. I’m going to then under or put my box here the little box right under the title so I can see the title. And then I’ve been the title, which is going to be the vertical analysis P and L 2020. And I’ll save that. 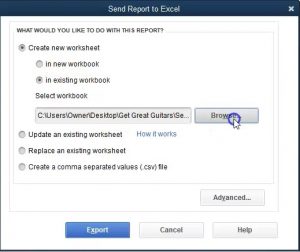 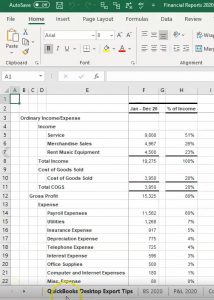 So we’ll print it to the PDF printer by selecting the print item will then get the printing dialog box to say hey, where do you want to put this thing, and we’re going to put it into our folder that we’ve been working on section one through four, that’s where we want it, we’re going to be putting it into the financial reports 2020 that’s the one and save. So we’ll save that I’m going to write over that file.

When we do save it. Let’s open it up, see what it looks like. So if we take this file and open it up, we’re going to say that we now are in section one through four. And we have the couple formats. I’m going to delete this one because because we’ve changed it the zip file. Now it’s this copy of this folder, deleting that we could have good we give this information to somebody at this point, we could give them an attachment of all these files, which there’s a lot now I’m not even going to count them, it’s too much for me to count I got I got we’re going to go back over here, we could zip that file and attach just one zip file by right clicking this file and go into a compressed or zip file attaching just simply that one file little bit easier, a little bit nicer.