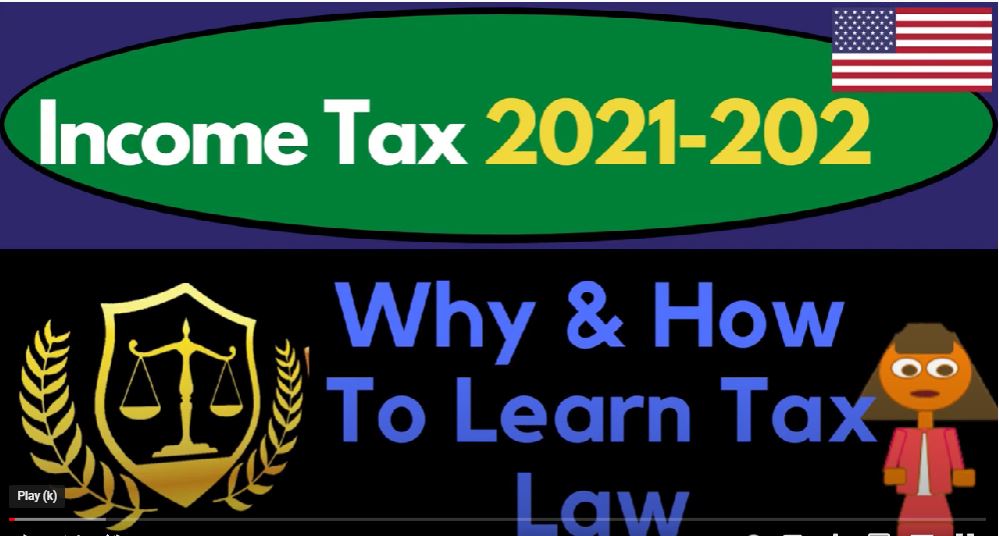 we want to make sure that we’re doing what we need to do meeting our obligations under the law for filing requirements, as well as paying our taxes but not paying more taxes than we’re required to pay under the law. Therefore, the objective will be to meet our obligations for filing and pay the minimum amount of taxes that we’re legally required to pay.

These are going to be the objectives for most people in the United States. If you work in the industry of taxation, either in a CPA firm or tax firm, or you have your own business, and it’s related to possibly taxation and or some type of consulting,

then you’re generally getting revenue or trying to generate revenue by helping people meet the objectives above of complying with the tax code and paying the minimum amount of tax that they’re legally required to pay.

So this is the most common type of objectives that we would be coming up with with regards to the tax law. And while those are important and practical reasons for learning tax laws,

they’re not as intrinsically motivating, have reasons. In other words, most people think of taxes as kind of like a hurdle that they need to go around, they want to think about it as little as possible as they go around it and then continue on their path towards whatever they’re doing. Even if we’re working in the field of taxation.

Many people think of it as just a series of steps that they need to mechanically do in order to just generate revenue. And especially if you’re working in the field of taxation, it can be a lot more enjoyable. If you look at some more kind of intrinsic reasons for learning the tax laws. One way to do that is to think about tax law, as government policy made manifest,

And the tax law is a huge component of what the government does not just to generate revenue to do what they need to do, such as defense and so on, but also to influence us in certain ways. So whenever the tax law goes into place, we can ask the question, well, why did that tax law go into place? What are they trying to do with that type of tax law? What is this action that they actually did mean? And how did it get put into place?

And when you’re thinking about other types of areas, and you’re trying to compare and contrast, say, one country to another country, or one state to another state, you can tell a whole lot about those places by following the money.

And with the government, the money is followed through the tax code. So for example, in a democratic republic, we often ask questions to ourselves and compare ourselves to other countries asking questions such as, how should we judge our government? What is the purpose of government? What should government do?

What is justice? What is fair, these are questions that we often see raised and things like news outlets, news outlets being a form of entertainment, forms of entertainment, that are used to generate revenue, just like any other form, like a Netflix or anything else. The fact that we see these kinds of questions on news outlets is a reflection that people are interested in them. That’s why they’re there.

And so and that’s good that we’re interested in them. But obviously, when you see them in an entertainment type of platform, we don’t really get a step back or nuanced view, we get the view that it’s going to basically generate ratings, typically.

So you’re often not going to get a view of the actual policy, oftentimes, or say something as mundane to most people as the tax code. But the tax code is a huge component of the way governments influence people.

So when we ask these types of questions, if we were to take a step back, and think of them in a more objective way, we would be looking at things like the tax code, if we were comparing state to state, which state is doing better? Well, let’s look at the money.

Let’s look at the tax code from this state to another state that was the purpose of the United States so that we can have different states run their own tax system as almost a testing ground to see which states are doing better and worse. And a lot of that can be looked at as following the money.

How are the taxes being affected? What’s the influence on the economy, as the taxes are affected in that way, if you want to see if something is a tyrannical type of place, versus more of a free type of place, oftentimes, you can tell a lot about that by by looking at the money and how the money is going to be collected.

So and and when you look at these topics down here. These two words are kind of catch words that we have to often be careful of, when someone says something that’s fair.

The term fair is often a catchphrase that basically carries all the weight. So you’ll often see say politicians talking about the tax code with no nuance whatsoever, just saying I want to tell tax code that is fair.

And the problem, of course is that of course you do, everybody does, no one’s going to disagree with a tax code that is fair. The problem is what is fair, the word fares covering all of all of the all of the weights carrying all the heavy load there.

Because fare could be anything to any different person, it’s a very vague form of language, what you really want to do is dive into the actual tax law, see what is being done, why it is being done, and then define your terms, what does fair mean?

interesting in answering some of these questions that people often see as more internally interesting. How do we learn tax law, then I would say the best way is to question it, to engage with it. If you’re just thinking about the tax law, as a passive observer of the tax law,

and just going through a series of steps, that doesn’t mean anything to you, it’s going to be more difficult to kind of internalize, make it interesting. And when you have questions saved from clients, if you’re working in the field of taxation, the client wants to know more than just basically,

this is what you do, because that’s the way they said what to do. Obviously, when we’re just filling out the tax code, that’s enough to fill out the tax code. But really, when you hear these kinds of questions, people are asking the types of questions we looked at above. Is that fair?

So we want to question it, we want to reason with it. We want to debate the law, we want to argue with the law. Why? Because it’s going to help us to understand the law a little bit more, it’ll help that law to stick in our mind.

It’ll help us to talk to clients and other people about the tax law. It’ll help us to understand what the end result of government policy is a large part of that been following the money,

which of course, is going to be the tax law. And the tax law is used for more than just revenue generation. It’s also used to try to influence our behavior and so on. So it’s a huge component. We should be questioning those types of things, because it’s applicable. It makes it easier to remember and because it’s more fun