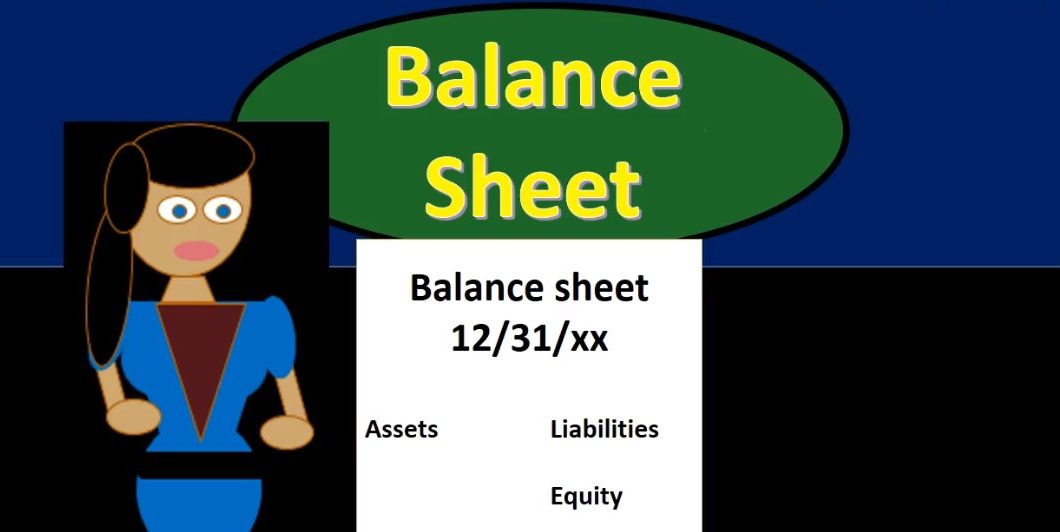 Remember that the assets of course, are going to be those things that the company has they have those things in order to help generate revenue in the future. revenue generation being the key The goal of the organization, liabilities being something that is owed in the future due to something that happened in the past therefore, past transaction, resulting in future obligation liability. Then we have the equity section, which could be in the format of the owner’s equity for a sole proprietor or partnerships, equity for a partnership or stockholders equity for a corporation. However, all three of those formats represent in essence, the same thing. The ownership or the book value of the organization meaning assets minus liabilities is, in essence, the book value of the organization. It’s important to remember that the balance sheet is as of a point in time.

Note that when we look at these components, we need to value these things differently than just counting the units that are there. For example, clearly cash is going to be counted in terms of dollars. So if we had $1,000 of cash, that is what we would have no problem there. However, if we had four units of ink cartridges, we’re not going to put those on On the books as four units of ink cartridges, this may seem obvious, but it’s actually a problem. It’s a conversion problem similar to the types of problems that we would have if we go to a different country and have a different currency, and that we have to do some type of conversion. In this case, we’re going to convert those four units of ink cartridges $2 and represent the dollar amount of in this case 200.

You may be asking, how would we come up with that 200 Where does that 200 come from? We’ll start to talk about that later. Especially when we get to supplies like ink cartridges, we might have a cost flow assumptions first in first out last in first out some kind of average method because all the ink cartridges may or may not probably not cost exactly the same amount, even though they are the exact same ink cartridges because prices change over time. So we’ll talk about that later. But for now, we just want to emphasize the idea that we’re going to have to report these things in terms of dollars everything’s gonna have to be reported in terms of dollars.

For example, that way And if we have land over here, we’re not going to report on the balance sheet that we have so many acres of land, we’re going to have to report that we have, in this case $40,000 worth of land. And again, that conversion is going to cause problems because the value of the land will change over time. And there’s a question as to what we should do. As the value of that land changes. We have the same for the property, plant and equipment in terms of a building, we’re going to say it’s $60,000. Now one building Miss, and the car we’re going to say $15,000, not one car. So note, when we report all the assets, we’re basically going to add all these up. And remember that when we do that, as we do that, we’re going to report it, of course in the measuring tool of dollars, but then recognize the fact that we don’t have all those dollars.

And notice that land however, is not something that will be depreciated meaning land is not generally going to go down in value, the dirt is the dirt, unless we’re drilling oil out of the dirt or something like that, we don’t typically need to reduce the value of the land. The building, however, is going to be another property plants and equipment something again, that we’re going to have for an extended period of time to help generate revenue into the future and achieve that goal of revenue generation. And it is something that will depreciate over time and therefore decline in value. And it is a depreciable asset that we’re going to have to write down over time. Then we have the auto, so an auto here’s another thing again, we’re gonna use that for an extended period of time. So we’re going to put it Under property, plant and equipment, and then we have the total property, plant and equipment.

So we are adding up the 40 to 60 to 50. And to get to 115,000, we’re going to end in that again, of course, and pull that subtotal out into the right hand side. Once again, the left and right hand sides, not representing debits and credits, but representing the subtotals lined out here and then and then the totals in the outer column, then we’re going to have total assets. And that’s going to be the sum of the outer column, the 1002, and the 115. For 116 200 notes that were never typically going to be bouncing from calculations to multiple columns, meaning this 116 is only adding up this outer column, we will never typically go from this column and then add up something and the other column over and all this number here was added up just from this column. We’re not typically going to add these three columns and then jump back over here and add something to the right hand side.

That will typically always be the case as you go to longer financial statements and other types of financial statements. It’ll really help to read them if you understand those concepts and will also help to create them. Next we have liabilities, liabilities are typically going to be less in number than assets. Most of the time the liabilities we will be dealing with the first liabilities typically dealt with in most textbooks and most types of learning. This process will be those dealing with vendors, accounts payable, more short term liabilities, those due within 30 to 60 days typically, and longer term liabilities notes payable being an example often being shown as a bank loan. When we’re first starting out a business, we might take out a loan have a longer term asset or liability that needs to be paid back. These then of course will also be represented in terms of dollars dollars that are owed in the future.

The assumption then being that the entire amount due the 70,000 is due after a year’s time period, meaning we took out a loan, we’re going to pay it back, we’re not paying it back monthly in this case, note that we can we can make the loan terms whatever the loan terms may be. Most people are familiar with like a loan for a car payment, or a loan for a mortgage or something like that. But a business loan or a minute, any type of loan could be formatted in any way possible. So are in many different ways. Maybe not any way possible, but in many different ways. So it’s very powerful. We’d take out a loan and we’re going to pay back both interest in principal at later at a later time. Or it’s possible that we take out a loan, and we pay back just at the interest and then pay back the principal at a later time.

Also note that it is possible that if we had a loan, such as a mortgage where we paid off monthly, I’ve learned that we had a payment schedule similar to that then that one loan would have a current portion and a long term term portion, meaning it would have a portion that is due within a year’s time period, and a portion that is not due within a year’s time period. In this case, it’s all due after the time period. We’ll talk more about breaking out those types of problems at a later time. We then have total liabilities and the total liabilities we’re going to pull out to the outer column and we’re just adding up the current liabilities and the long term liabilities to get to that total liabilities.

We then have the equity section. equity section is going to be the amount due to the owners And I’m just going to give the amount as of now, that’s going to be 46 100. And I’ll show you one way that we can kind of calculate the amount right now. And that’s going to be of course, taking the assets minus the liabilities, giving us that equity number. In real life. Of course, as we create the financial statement, as we create the balance sheet, we will be getting this number from the transactions that took place from the data that we input into our system from the trial balance that we have been generated from that data that we input into the system.

Most of the time when we start out however, we’re basically going to give you the numbers and just and just look at a at the numbers that would be related to a fully completed balance sheet and then talk about how we are going to construct that so shortly We will then get into the construction of the transactions, the posting of the transactions, the building of the trial balance and then the building of the balance sheet. First, we’ll look at these components of the balance sheet however, therefore the balance sheet as of a point in time, December 30 First 2001 in this case, we didn’t have the assets that we put together the current assets, and property, plant and equipment being the two subcategories of assets. We have the sub category accounts on the inner column and the totals pulled out to the outer column. We then have total assets on the bottom line of the assets section. 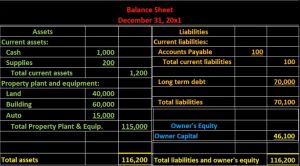