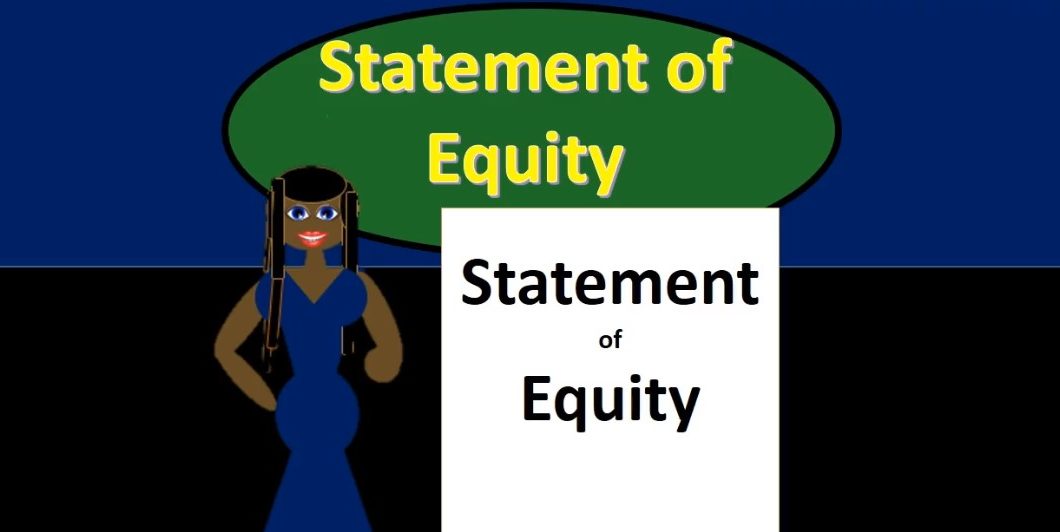 And we’re going to have the same kind of phrasing we would have on the income statement. So of course we’re going to have for the month ended, we cannot just have the date of December 31 2001. In this case, as we would have on the balance sheet, we need for the month ended. We need that beginning timeframe and that ending timeframe, that beginning point in time. And that ending point in time, note that in this case, the equity actually went down. So we have beginning equity of 54 600. And we ended at 46 100. So we need to basically see what happened in the interim in terms of decreasing the total equity. So let’s take a look at the calculation.

So net income is going to increase the activity, that’s going to be the main factor typically. And then we’re going to in this case, we had service income, which is going to be services minus the expenses, meaning we had revenue from service revenue, minus the expenses, this entire amount being reflected on the income statement. So we’re not actually going to show the detail here of the revenue minus expenses that is shown on the income statement. What we will show as a reconciling item of the beginning balance to the ending balance is that net income that then can be expanded and explored more when going into an income statement. Then we’re going to decrease this amount by draws, draws representing the amount that the owner has drawn out of the company taken out for personal use.

In a corporation it would be similar to dividends, dividends, being the amount of money being distributed to the owners, to the shareholders for their personal use. And that would then give us our ending balance. So then we have our ending balance. And we can think of it as what is owed or contributed to the owner, meaning kind of the book value of the company, you can think of it as if we were to sell all the assets and get the cash and then pay off all the liabilities, that would then be what would be left over, if we had sold all the assets for exactly what the assets value were for, and pay off all the liabilities for the value that they were, that would be the Indian book value. So our calculation once again is always going to be for the equity section.

That will then give us our Indian equity balance. So if we look at a statement of equity, a very kind of simple statement of equity we start with the beginning balance in this case, note the dates were have for the month ended December 31. That of course means That the month is beginning at December 1 and ending at December 31. We’re going to take the last year’s Indian equity, that’s going to be this number, starting with the owner capital account and taking the 54 600. And it’s going to be last year’s equity. Where would we get that number you might ask, we could look at the last year or in this case, we have the last year, but this is for a month. So this would be the last month. In our case, it would be November, we could be reporting, of course the statement of equity for a year’s time period or a month time period, this will be for a month time period.

So net income being a number that we are going to get from the income statement. This number here should be the bottom line, last number on the income statement, and then we’re going to decrease it by draws. So note here that the draws are actually much larger than net income. So although net income is increasing the 6500 net income minus the 15,000 draw It actually results in that decrease in owner’s equity. So we have a decrease in owner’s equity because more was drawn out of the business than was earned in net income for this time period, meaning earnings were 6500, the owner drew out for personal use 15,000, we might think that that would be a very big problem. And if it was the first year of operations, it could be a very big problem.

But in this case, note that we had retained a nurse prior to this of 54,600. So even though we pulled out a lot more 15,000 then earned 6500 there’s still a lot of value within the company, meaning we still have the 54,600 beginning balance minus the net here of 8500, leaving us with a net balance of 46,100. So there’s still value in in the company here at even though more was pulled out than was earned in this current month. This 46,100 would then be what is reported on the balance sheet. Also note that this does represent this 46,100 represents the book value of the company. And you if that would lead us to think that the owner could at any time pull out 46,100.

But note that that’s not necessarily the case typically not because the organization does not have the business does not have $46,100 in cash, what they do have is 46,100 of net assets, meaning we have total assets measured in dollars, including cash, but also including equipment and other things that are non cash minus liabilities of 46,100. So, note that although we have this much that we can say the owner has claimed to the owner would not be able to take that much money out of the organization Unless Unless they had basically We liquidated the organization in terms of selling the assets, receiving the cash and then paying off the liabilities. So just keep in mind that this is the bottom line number, the the kind of the, the main number on the balance sheet and on the statement of equity representing the where a company stands as of a point in time, but that does not mean that the owner can walk away with that at any given point in time knowing that that of course, is including assets minus liabilities, all assets, not just not just the cash assets. objectives, we are now able to describe the statement of owner’s equity. list the components of the statement of owner’s equity and explain the reasons for a statement of owner’s equity.