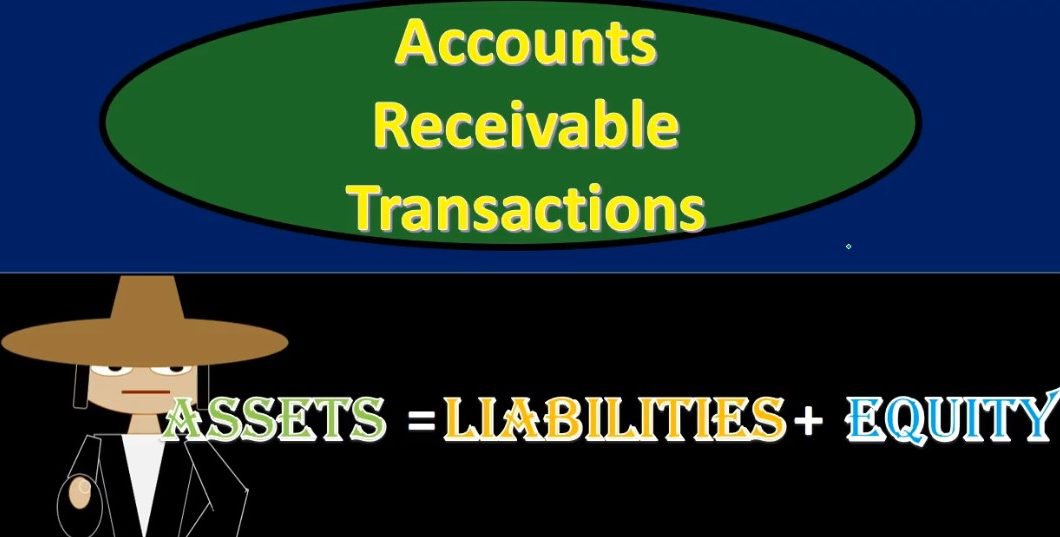 Those being in the terms of assets for this problem, cash, accounts receivable, supplies, all assets. We focus in here on accounts receivable. Looking at that accounts, we see cycle and therefore, these transactions will basically be selling something on account and then receiving payment at a later time. In terms of liabilities, we just have the accounts payable. And within the equity section, remember that we have the capital account and the entire income statement, which includes revenue and expenses. If this were a corporation rather than a sole proprietor, this capital account would be something like common stock retained earnings, and we would still have revenue and expenses meaning the entire income statement is part of the equity section, then we’re going to see that total assets of course will equal total liabilities. And we can look at the impact on net income, meaning the impact on revenue minus expenses. first transaction, we’re going to say that we performed work on account no cash received.

Now typically when we first start looking at the recording of these transactions, we’re not going to be looking at a company that sells stuff. We’re You have a service company. So therefore we’re going to be a law firm or bookkeeping firm. And we’ve done work you can imagine work being done, and us basically invoicing the client, that will be the typical flow of many types of industry. So those types of industries where we do work, and then invoice the client would be this type of transaction. What happens then is we invoice the client, and the client basically has an IOU at this point in time, nothing tangible has taken place, other than possibly an invoice going from us to the client, but no money has taken place. The services have been completed. So at that point in time, then we haven’t received cash. But we have got something we’ve got this IOU and that of course will be the accounts receivable item here so we’re going to say the receivable is going up.

Due to the fact that we are owed money, then we need to know what the other side of the transaction will be. Why will people be paying us money this 10,000 sometime in the future because We have earned it. And the act of earning is under the revenue recognition principle, the time and the point at which we recognize revenue revenue over here on the equity side. So we have revenue on the equity side, we know if that receivable went up, then the revenue must be going up. So I’m going to increase revenue on this side as well. If we also want to think through that, however, and say, well, revenue, revenue only really goes up. Meaning if this is a customer, that we never really pay customers money never really goes the other way to us paying customers, it only goes this way, the customer is going to pay us we do work for customers, and therefore the revenue is going to only increase, it also has to increase because it’s going to increase the amount of total equity.

So we can kind of double check ourselves in terms of the accounting equation, knowing that this will increase and in terms of just looking at that account, analyzing that account and seeing that it increases That format as well. Also note that some people don’t like the idea of recording revenue and assets before we receive cash thinking that we’re kind of recording something before we have earned it, but realized that we are receiving something here meaning this receivable has value in that we believe we’re going to get paid within 30 to 60 days. And therefore, if we went to a bank and we were giving someone a bank loan, this is important information, the bank needs to know the money that we are going to receive that’s important information to decision making as to whether a loan will be given.

Now if this loan is not likely to if we have accounts receivable here and it’s not likely to be paid, then we’re going to have to do we’re gonna have to tell our readers of the financial statements that in some way, we’ll deal with that at a future point. That is something that is a concern that we have to deal with. But note that this is a receivable that’s not as valuable as cash in that there’s more risk involved to it, but it still is a receivable just as putting money into it. Stock Market isn’t as solid as having the cash, although there’s better ability for gain. That’s why you put it there. But it’s not as guaranteed as cash. But we still are going to record it hoping out, you know that there is a likelihood that we will receive it and it is therefore, an acid, the revenue, we’re going to record at the point in time that we have earned it whether we have received payment or not.

We see the transaction here, then we’re going to have accounts receivable increasing and we’re going to have assets therefore going up and we see that the revenue is increasing that will increase the equity, no effect on the liability section. Therefore the total assets of those transactions including just the accounts receivable is equal to the liabilities plus equity. We also noted that net income is going up at this point in time that happening because revenue went up and revenue minus expenses means that net income is going up by that too. thousand. next piece, we’re going to say that we received cash on account for work done in the past. Now remember when we work with these transactions, we’re going to have to look at the beginning balance. So now we have something happened prior to this, meaning we have the prior balance here, which which just includes the prior transaction, we’re going to record the current transaction, and then we will have the total transaction we’re gonna have to add those two up.

So when we look at this transaction, we’re going to ask our question is cash affected? And we’re going to say, yeah, we’ve received cash received cash, that’s always going to be the key word typically problem in a book problem, we’ll say something like that, that we received it in real life, obviously, it would be obvious we would receive a check in the mail or something like that and a book problem we would have to read that and interpret it. Note also that we see we may see something like on account which typically makes us think accounts receivable or accounts payable, and it may may you make you think like Does too many that cash isn’t involved because typically when we see accounts on account, it means that we’re possibly receiving payment without cash. Note that this is the second transaction however, so if we were to buy if we were to do work on account, no cash happened, we did work as we did in the prior transaction, and we had not yet received cash.

But if we receive cash on account, that’s the second half of the transaction. That means both cash and the accounts receivable in this case will be affected. So if we go through our questions and ask is cash affected, that’s usually the best way to start. And we’re just going to Yeah, cash is affected, we received it. Therefore, we’re going to say cash is going to increase. And then we just need to see what the other side of the transaction is. We see that we are getting 10,000 from the client and therefore might believe that that should be revenue. But looking at the prior transaction revenue had already been recorded. And the reason is because of course We did the work in the past, we’re not doing the work at this point in time, we are just receiving the payment at this point in time.

Therefore the other account effective is receivable, the amount showing that people owe us money people owe us 10,000, they’re not going to owe us 10,000 after they pay us 10,000 and therefore this receivable must be the other side going down. So if we were to look at the transaction, it would look like this we’re going to say cash is going to increase receivable than is going to decrease. So the asset then is going up and down we have an asset going up, asset going down, no effect on liabilities or equity. So this is one of those transactions which is a bit confusing in terms of the accounting equation because there’s no net effect on the total assets or the liabilities and equity sides, no effect therefore on income, because one asset is going up and one asset is going down in essence we got a better assets and we lost the worst or asset here.

We lost people owe us money, people no longer was money because they paid us the money. Remember what the receivable account is doing is just tracking it’s just tracking who owes us money. Then we were going to calculate the balance here and we’re just going to bring the balances down. So we’re just saying this is our prior balance, this is the current activity. This is our total prior balance was zero 10,000 increase in cash total is 10,000. Prior balance and accounts receivable is 10,000, we decreased at 10,000. current balance is zero, no other activity in any of the other accounts. And of course we are back in balance total assets equaling total liabilities plus equity.