This presentation and we’re going to apply a credit or an advanced payment to an invoice. In other words, we got paid in advance by a customer recorded that into the system. Now we’re going to create an invoice and apply that event advanced payment to it. Let’s get into it with Intuit QuickBooks Online. Here we are in our get great guitars file, we’re first going to take a look at our flowchart in the desktop version.

So let’s open up the desktop version and see our scenario. So in prior presentation, we had a customer come into the shop that customer said I would like this particular guitar and we said hey, that’s great, but we can’t give it to you at this point in time for whatever reason, but if you you know give us a deposit and show you’re committed to it, then we will get it for you and we will provide it to you at some later point in time. They then gave us a deposit.

We put that into a receive payment doing kind of the reverse transaction here we recorded a receive payment before we recorded the invoice that receive payment then results In the the accounts receivable resulting in kind of a negative balance for this particular customer as opposed to a liability, and the other side being for the undeposited funds, basically cash going up to undeposited funds. Now we’re going to say all right now the guitar is here we have it available for you, we’re going to create the invoice for you.

So now we’re going to actually create the invoice and the invoice then will increase the accounts receivable and it will increase the sales as well as the inventory and cost of goods sold. And as we record this, then we need to net out the fact that they already paid us some portion of the deposit so we need to make the invoice for the amount that is remaining. And then what’s going to be left in terms of the accounts receivable will be the amount of the invoice minus the deposit that they have already given to us. Let’s analyze this a little bit further before before we record the invoice in QuickBooks Online. We’re going to go to the reports down below.

We’re going to be going into our trusty trial balance. So let’s go into our trial balance. So we’ll type in trial balance here, and we’ll go there. So we’ll open that up. I’m going to scroll back up top, and we’re going to change dates up top from a one a 120 to 1230 120. Run that report. Then I’m going to duplicate the tab by right clicking on it and duplicating it. Then I’m going to go back to the tab to the left and we are going to then open up another report that being the accounts receivable and accounts receivable report or a customer Detail Report. I’m going to scroll down we’re looking for the people owned us money. So who owes you and we’re looking for the customer balance detail. So we want the customer balance Detail Report. opening that up. 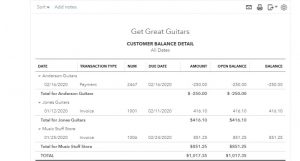 I’m going to right click on the tab up top, right click on it and duplicate that tab. So then I’m going to go back to the trial balance. I’m going to close the hamburger. I’m going to scroll up a bit holding down control, so that we can see the 125 at the amount of zoom. So then we see in undeposited funds, we have the 250. That’s how much they gave us in when we recorded the sales receipt. And then the other side went into accounts receivable. So if I go into accounts receivable it has a positive number, but it also has this this decrease of the 250. Now if I if I go back up top, and go back to our report, those are the two accounts affected last time.

Now let’s take a look at the detailed report the AR detail and the AR detail. We see that 1017 35 that’s the total amount. However, it includes a negative amount owed by this customer. How can this person have a negative receivable owed to us they can’t right if they owe I mean, if we owe them money, which we basically do because we owe them money or their guitar at this point in time, it’s not an asset. It’s not an accounts receivable, it should be a liability. So we should have put it in there and Instead of In other words, if I go back to the trial balance, this accounts receivable should be higher by that 250. And we should have a liability of the 250. 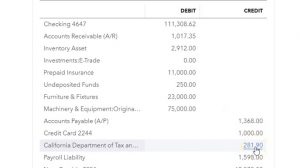 Because we owe the 250 back, which might be called unearned revenue or we we owe the guitar. So at this point in time, we basically have a liability for that deposited amount. However, going back to the prior sheet, we recorded it as a negative receivable because logistically, it works a lot better, because the negative and receivable can be tied to the customers the AR account is what ties to the customers and therefore that negative receivable can be matched up to a later invoice that we will create. So that’s what we’ll do this time

This is a little out of whack right now. But when we create the invoice, then that timing difference will will be gone because the receivable will then be positive as it should be, and everything will be back back to kind of normal. So this works logistically, it does have a problem in terms of financial reporting, and we would adjust for it at the end of the time. period with an adjusting entry if we needed to do so. Okay, so now that’s where our story is. Let’s go back to the first tab. And now we’re going to be recording the invoice.

We’re going to go down to the product and service and it’s going to be an LP or one of our most popular guitars, the LP so I’m going to pick that one up. In there we have it so that looks good and it’s at the 500 and then we have the sales tax at the 4754 total of the 547 50. Now what we want to do is to apply the credit for this particular customer. One way to do this is I’m actually going to say hey, I want to save this, I’m going to go ahead and save and close it, it’ll typically give me a pop up and say, hey, there’s a credit for this particular customer. 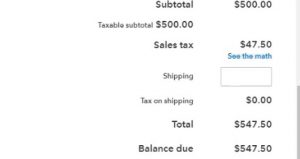 So if I say Save and Close, and then go back into the invoice and they applied out the credit now so if you go into the invoice, then you have the 500 and the 4750, bringing it the bounce up to the 547 50. And then we see our advanced payment that has now been applied out of the 250. That gives us the balance that is still do have the 297 50 and you can also see the payment made up top of the 250. So there’s the one payment that was made on it and you can have a link to it here. You can click on that it’ll take you to the link to it.

So I’m going to go back down we’re going to save and close it once again. Going to go back to the trial balance we’re back at the 125 on the setting the accounts receivable now at the 1005 4685. That’s good To be the major thing we’re considering here, if we go into the accounts receivable and scroll back down, we have these two amounts for Anderson we have the payment happening before the invoice so the payment of the 250 and then the invoice later being that 547 so the full amount of the invoice still being recorded, but the net of the two is now basically what the receivable is and that can be reflected then if we go to the prior report and the customer balance Detail Report, where Anderson now has let’s, let’s refresh this report Hold on a second. Alright, so that looks better.

So the total the total down here is 1005 6485. That ties out to the trial balance and then for Andersen up top we have the invoice for the amount of the 547 50 and the balance of the 297 50. So we have the amount that is owed then the 297 50 now we have a positive balance for all of our all of our customers which is appropriate because the accounts receivable should represent who owes us money. And you can see the timing difference basically works itself out works itself out now. So we should have basically all positive numbers in terms of the accounts receivable adding up to the total, everything lines up with the with the trial balance.

Now if we go back to the trial balance, we actually obviously we made an invoice, the accounts receivable went up in terms of the invoice here. And then if we go back, the other side is going to be going to the sales. So sales is going to be down on the p&l Profit and Loss sale of product. So if we go into that item, then we have the Epiphone that was sold at the 500 not including the sales tax, the difference if we go back up top, going back to our report should be in the payable account. 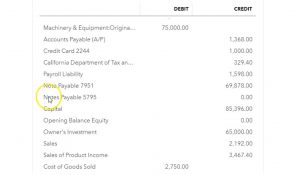 So it’s going to be in the sales tax payable or it’s going to the California Department and so on here, it’s going to be in there, I won’t go into it and then the inventory went down. So inventory assets went down here. So if we go into that, it went down to I’m out not on the invoice. So there’s the invoice it went down by the 400 because it’s driven by the item. And then if we go back to our report the other side then going on the cost of goods sold into the cost of goods sold for that particular invoice as well. There’s the 400 for that invoice there. What’s the effect on net income, the difference between the the increase in the sales item which I believe was 500, and the increase in the expense I believe was 400. So income going up or net income going up by the difference or 100