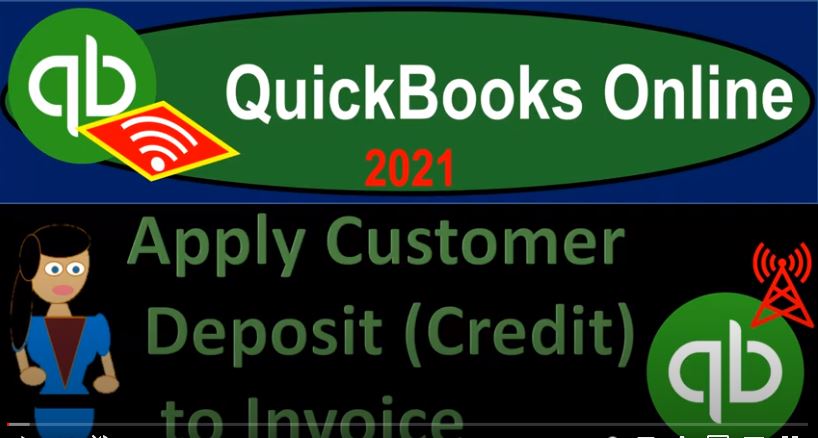 QuickBooks Online 2021 applied customer deposit or credit to an invoice. In other words, we got a pre payment from a customer in the past which we will now apply in the format of a credit to the invoice that we will create to complete the sale complete the transaction. Let’s get into it with Intuit QuickBooks Online 2021. Here we are in our get great guitars practice file, we’re now going to be creating an invoice for a customer who made a deposit in the past. Let’s first open up our financial statements, we’re going to right click on the tab up top and duplicate it.

So last time, I’m going to go back to the balance sheet. Now we were had a scenario where someone came in ordered a guitar and then they put a downpayment in on it. To see this, let’s take a look at our flow chart on the desktop version. You don’t need the desktop version to follow along here, we’re just looking at the flow chart. And so we had someone come in and say hey, I’d like this guitar, for whatever reason we couldn’t give it to them at that point in time, but we would get it for them.

And so we said hey, in order to commit to the purchase and make it worth our while to get it for you, since it’s a kind of a large thing, then how about you give us a down payment now to lock us in to this transaction.

So that that means that we got a receive payment in essence, increasing the cash that we received that we put into undeposited funds in this case, and the other side then go into basically accounts receivable, which would normally be reducing, and accounts receivable related to a particular customer, this time reducing accounts receivable, but not reducing an invoice from a customer leaving what we would call a credit to the customer, which we can then apply out to the invoice which we’re going to be creating afterwards.

Now remember that when we did this, it’s a little bit funny. In that logistically, it works quite well, because what we end up with is that negative receivable instead of what we should have in normal financial accounting, which would be a positive liability. And the reason that works and we talked about this last time, so I won’t go into a lot of detail in it is because we want to have these things tied out in the customer field so that we can use that to tie out the received payment and the Create invoice instead of having an account in the the liability account, which will make it more difficult to do that.

So let’s go back on over to the reports. Then I’m going to go back here. Let’s open up another report, which is going to be the receivable report by customer report. So I’m going to right click on the tab up top, and I’m going to duplicate it again. So this is the triple duplicate we’ve duplicated three times at this point. So we’ve completed the hat trick of duplications.

So we have a negative receivable as opposed to a liability, which would be an unearned revenue positive liability. But this works great here logistically because now we can make the invoice and the system because it’s in the customer area should hopefully allow us to apply over this prepayment to the invoice matching those two things out, which is of course what we want to be seen happen.

So let’s say we’re gonna say now we got the guitar and we’re gonna say hey, customer Anderson, Mr. Anderson, we got the guitar now so let’s complete the transaction. So we’re going to then go to the plus button and let’s make an invoice now. And so we get the invoice I’m gonna hold down Control, scroll down to 100%. So the invoice doesn’t do or isn’t less likely to do funny stuff.

And then I’m going to type in Anderson, eight, Mr. Anderson, tab, and we’ll tab through this so there’s going to be the date let’s put the date on the 18th this time so we’ll make the date as of the 18th. And we will then add the actual guitar down below and it’s going to be a Gibson USA.

So there’s our sales tax at the 19. Now we have our invoice, but they gave us a $250 pre payment before this point in time, what we would like to do is apply that out here. Now we can’t apply it to the actual invoice, we got to actually record the invoice and then go to the next step to the received payment to match out the invoice and the received payments, we’ll take a look at that step.

So let’s do a quick check. If I go then to our balance sheets, let’s go to the balance sheet, I’m gonna say run that report, hold down Control, scroll up just a bit. Now if I go into the accounts receivable, and this is where our focus will be, so maybe we’ll just kind of focus in on here since we’ve seen the invoices recorded in the past, right. So here’s gonna be our invoice.

So here’s Anderson, there’s the 399. And there’s the 250 deposit that was should be applied to that 399. We can see that also, if I go back up top, in our our detailed report by customer going to the tab to the right, let’s refresh this report fresh in this report up. And in the Anderson item up top we have the invoice it’s not showing the payment right now let’s scroll back up top, customize this report and go to the filtering options. And I would like to see the paid I want to see all items here. So we’ll say all items in the filter, and then run that report.

And then in the Andersen section, we’ve got that 250 and that 250, we would like to be applying out to that 399 invoice. Now sometimes QuickBooks will kind of read our minds after that point and actually do the application which it did here. So now if I go back into this invoice, which we just made, and I go into this invoice, then it should have tied it out. So if I go down here, there’s the 399, there’s the 250 that has already been applied. So they basically applied it out.

So if you want to print the invoice, then you want to go back into it and make sure that when you when you send the invoice you’re sending the amount with the amount that will do will still be due, which is going to be the $149. Now if for whatever reason, QuickBooks couldn’t read this thing and couldn’t link it up, then of course you go to I’m going to create a new tab, duplicating this tab up top, I’m going to close this invoice back out in our new tab. And then you can go to your new option up top and we would go to the received payment.

And if it hadn’t applied these two things out, then you would have in the received payment screen. typing in Anderson guitars, we have Andersen guitars, then we’d have our invoice and we’d have the payment that we could basically be applying to that invoice if it had not yet been applied out. And but of course it did it basically automatically for us here. So that’s great, we’ve got it tied out. So I’m going to, I’m going to well before I leave out here Do you want to leave,

I’m going to close this back out we could check this in a few other areas if I go to the sales items on the left hand side. And then we go to the customers tab up top which is in essence the customer center. Then we can go back down into Anderson guitars and this is another area where you can kind of confirm what has happened with the pre payments here. So we then have the payment that was gotten before and then the invoice that happened later which we have this partial payment to so it has been applied out there.

So let’s go back up top I’m going to close up this tab. I’m going to close up this invoice now. And then in Anderson guitars, we’re now in the customer balance detail. Note at this point in time our accounts receivable is back into good standing so we’re back in good standing. We don’t have any customers with negative receivables at this point. And so at this point in time, we don’t have any problem with unearned revenue. And notice that that unearned revenue with a timing difference.

So it’s kind of like a temporary problem that could be in place right when unearned revenue when we have unearned revenue, and we have it then recorded as a negative receivable, then we kind of have a problem we have a negative receivable rather than a positive liability. And if we were to generate our reports like you’re in reports per month in reports that we want you to present on a proper accrual basis, we would have to do that adjusting entry at the end of the time period.

It’s a little bit more complex than just having like the negative accounts receivable here to use the unearned revenue and set up items in order to basically record it to unearned revenue. So if you’re in like a type of industry where all of your sales are basically unearned revenue, and you would rather basically record everything down there possibly, then we might go over another method that you can use to do that, which again is a little bit more complex after the whole practice problem is over and we’ll consider that but it is what we stand for.

Now let’s go ahead and then go to the last tab and let’s open up the trial balance. So I’m going to hit the drop down, we’re going to go to the reports down below. Type in the for the trustee TB trial balance. Run that report and scroll up top range change it to Indian Point 1231 to one running the report, closing the burger holding down control scrolling up there we are at the one to five, you could check your numbers here and we will then also print out the trial balance so you can check your numbers at at that way as well.