In this presentation, we will record the customer payment for invoices that had been issued in the past, then we’ll take that money and put it into the bank recording a deposit with it. Let’s get into it with Intuit QuickBooks Online. Here we are in our get great guitars file, we’re first going to take a look at a flowchart on the desktop version real quick to see what our objective is, we’re going to be entering a receive payment. So in the past, we had entered and invoice and that increased the accounts receivable and the bill that’s basically a bill to the customer. Now we got the money.

So we’re imagining possibly we got it in the mail mail, let’s say and now we’re going to go to the receive payments, collecting that money, putting it into undeposited funds rather than the checking account so that we can then take that money and go to the bank, deposit it into the bank in the same format that it will be grouped as on the bank statement. All right, let’s go close this back out. We’re going to go back to our new button in QuickBooks Online. We’re going to say that this is going to be in the money in Section We’re on the receive invoice payment. So remember, it’s called receive invoice payment currently here in QuickBooks Online, the actual form will be called just receive payment.

We’re looking for music stuff store, that’s our customer. So you can get it from the drop down or you can type it in music stuff store, that’s the one we want. I’m going to pick that one up, and the date will be to 26. So I’m just going to hit the plus button, so we get up to 26 here to 26. There we go. And then notice this time, we actually have invoices we’re not getting a deposit for like no invoices now. Now we have the invoices down below, and we’re going to select the invoice that we want to be applying to. We’re going to say that we got paid for this first one. So we’re going to click I’m going to click on that check that auto populates the amount up top and we have our normal kind of received payment type of process where we actually got money related to an invoice that was created in the past. What’s this going to do when we when we save this? It will be because it’s ever seen.

Payment increasing some type of cash account in our case undeposited funds other side going to the accounts receivable, decreasing accounts receivable related to music stuff store. Now instead of hitting save and close, I’m going to select the drop down or drop up in this case and it’s going to be it’s got a down arrow, but it really kind of goes up. And then we’re going to go to the Save and new. So we’re going to say Save and new because we’re going to do this again. If you go out of it and come back into it, then just simply go back into the receive payment window. Let’s get it back up to 100. This is going to be for Anderson guitars.

So I’m going to select the drop down or just simply type in Anderson, Anderson guitars. So there we have it tab. We’re going to have the date here to be the 26th as well. And then the payment method I probably didn’t I don’t think I put the chip I’m going to put a check for the payment method. And it’s going to be here and then undeposited funds is going to be increasing so we’re going to be increasing undeposited funds. Here’s the invoice down below. Now this invoice you’ll recall was the one that Anderson put a down payment on. And therefore we had the down payment first. And then we had the invoice that we entered later. And then the amount that is now do is going to be that to 297 50.

So they still owe 297. In other words, they gave us a down payment, and then we give them the invoice, which was more 575 4750 minus the down payment that they provided us means they still owe us the 297 50 that we invoice out to them. And now they paid us that. So what’s this going to do? It’s going to do the same thing. Of course it’s going to be increasing the undeposited funds, the other side being accounts payable, accounts receivable going down, and that will be affecting the accounts receivable related to Anderson guitars. This time we’re going to say Save and Close I’m going to say the drop down which is really a drop up and we’re going to go to the Save and Close and then I’m going to select that button. 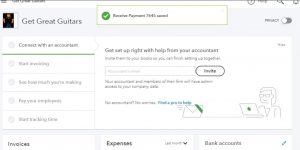 Now we have that 1006 98 I’m going to click on that 1000 698 scroll back down and we’ll see our our payments that we see down below. So these are the last two that we had recorded these two items. If I click on either one of those will go to the receive payment item. Just note that the form is receive payment and the amount that’s going to show up here or the item that’s going to show up here. Payment so that payment in other words, let’s just click on it will tie out to the to the receive payment form. So I’m going to close this back out, going to scroll back up top, going to go back to the trial balance up top. 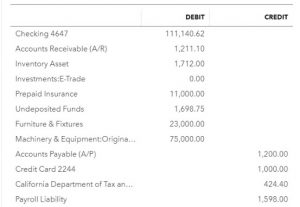 So we know that the undeposited funds and the other sides it’s going to be affected is accounts receivable it goes down so I’m going to select the accounts receivable, we’re going to go on down to the payments and we have it for music stuff store and Anderson music stuff store and Anderson. So there we have that if I go back to our data on the left hand side, holding down control, bring it back down to 100% with the scrolling down, and then I look at the sales and we take a look at the customers and if we were to pick pick a particular customer, or the ones that we’re working with here such as Anderson and scroll down say I’m going to pick Anderson right there, there’s Anderson and and look at the detail we can then see the transaction detail as well.

We just entered was the payment on to 26. And and there’s the detailed related to it, that’s going to be relating to your recall that the they had the payment that happened first, which was the 250 and then the invoice. So if we take a look at this, this actual invoice, take a look at that invoice and scroll down, you’ll note it’s now paid off and you’ll recall that it’s it’s paid and it’s got the two items that are now applied to it. So if I select this two payment made, then it’s going to give us the detail on the two payments that were made rather than the one payment the original being the deposit, and then the rest of it being made after after the Qatar was received and shipped and invoiced for. Alright closing this back out. We’re now going to go to the deposit side of things.

It’s going to be coming out of the checking account and we are going to be working with the items up top because these are these are the items that are coming from the receive payment form or the sales receipts forms as is indicated here by the payment forms. The items down below you’ll recall our areas where we can just simply enter an account for example, if it was a loan or something like that, we had a deposit and the other side going to loan or something like that. If so, we’re going to deposit all of these deposits that we have now. So we’ve got the Anderson we’ve got Anderson the two amounts there and then the music and in the string music so that’s going to be four items that we’re going to include for total amount of 1006 9875.

What’s this going to do, it’s going to increase the checking account by that 1006 9875, which will be reflected with one total, which hopefully is the same total that we will see on the bank statement when we get the bank statement. So we can compare those two out. undeposited funds will then be going down and it’ll show the detail of the four separate items so that we can match up the increases and decreases in that account. Let’s check it out. We’re going to go to save and close. We’re then going to go back to the trial balance tab, I’m going to refresh the screen refresh it. I only work with fresh screens, I like to have a fresh screen.

So I’m going to close out the hamburger over here I’m going to hold down Control I’m going to scroll up a bit and we’re at the 120 512 5% we’re going to check out the checking account. First let’s go on in to the checking account. Scroll down and we should see our deposit at the bottom here somewhere there it is on to 26. That’s the one we want. We have the one deposit so those four items are being reflected by that one deposit which again we hope will be reflected on DVD. bank statement in the same format and making the reconciliation process easy. Back to our report, going back to the report, then the undeposited funds and now add zero because we deposit everything but the zero is still showing up in the trial balance because we had activity in it during this time period, selecting it, then we can go down and we see our deposits. But now there’s four of them.

We didn’t actually make four deposits, but that one deposit had those four pieces to it. That helps us to basically tie out the increases and decreases in the undeposited funds in case there’s a problem with the undeposited funds. If we go into any of those four items for that particular deposit, then we will see the deposit will see the detail of those four items. And we’ll see the total amount that was deposited which was that 1006 9875 which hopefully is the amount that ties out to what we will see on the bank statement. Going to go back going to close this back out. We’re going to go back up to our trial balance. I’m going to go back up so I can then go back over to the trial balance. This is where we are at this point in time and like we say we will be printing out the trial balance after each session so you can kind of compare and contrast making sure you’re in the same spot.