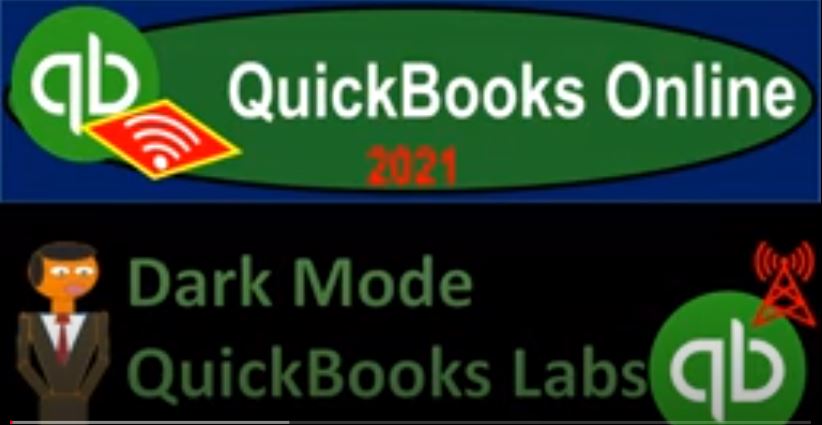 QuickBooks Online 2021 dark mode, QuickBooks labs. Let’s get into it with Intuit QuickBooks Online. Here we are in our get great guitars a practice file, before we get into the themes, we just want to go over some of the differences between the layout and the changes that could take place with QuickBooks Online versus the desktop version. Notice if you’re on the online software, like a webpage, they can do more testing and make more changes a lot more rapidly than you will see say in a program that will be downloaded, say something like a desktop version.

So the desktop version I’m jumping over to the desktop version here has had this drop down layout up top and, and some of the same kind of functionality in terms of how to navigate it, although there have been changes every year. But the basic layout of it has been much the same for a long time with the online version, because it’s kind of more of a web based system, they can make changes to it. So you’ll actually go into it in a you know, a day later. And you can say, hey, there’s a button that was over here. And now it’s somewhere else, the most obvious one would be this new button right here, which is now on the left hand side, it used to be you know, button up on the top over here, it was in the middle at some point in time.

And now you notice if you close the hamburger up, if I close this hamburger, that little plus button now pops up here again, so you kind of have the best of both worlds. There, they’re able to, to move that thing around and make adjustments to it. Because it’s an online version. Now, that kid that has both benefits and problems. The benefits, of course, is that they can do their testing, they can do testing, they can get feedback, and they can see what people like.

Obviously, the downside of it is that you can open up QuickBooks Online one day and this button that you’ve had over here the whole time can then now be popping up over here somewhere, and you just got to get new used to the change and then see if QuickBooks you know, trust QuickBooks research, to to say to know what is the optimal position for it and then just go with it, you know, go with the flow, as they as they make those adjustments. That’s also why an adjustment to the quickbooks online software each year is really useful, because the look and feel of the online layout will could change a lot, even though the total functionality in terms of creating the financial statements is will remain much the same.

So if we open that back up, keeping that in mind, let’s go to the cog drop down up top. And then we’re going to go into the your company section. And we got these two items down here, the QuickBooks lab and the themes. Now if you go into the QuickBooks labs up top, it says up top come play in our high tech playground be the first to try the best QuickBooks experience plugins. So they got plugins available here. That’s another kind of benefit for the online version. You can have plugins, possibly for a desktop software, but it’s a little bit easier when you have a web based software to kind of integrate those plugins. So we got the check back often to see what’s new.

So you can come back in here from time to time, and see what they have for you. So the one we’re gonna turn on right now is the QuickBooks themes. And we can take a take a look at that. And then they have the tags down here currently cash flow dashboard widget, you could check out import style, and turn on on the community reports. So you can take a look at those items. But you might want to jump in here from time to time just to see what the current thing is that they are experimenting with and see if it will be applicable to you. We might talk about the tags later, we might get into more of the plugins in general in a future point in time after the practice problem.

But I just want to check out this one The theme for now. So I turned that one on. Once that’s turned on, then if you if you close that out, and I go back into the cog here, then you’ve got your themes on the bottom left hand side. So if I go into my theme, now I have the dark mode, it sounds kind of sinister to have a dark mode on it or something like that, like it’s a bad bookkeeping. But in case if you turn on the dark mode, it’s really good on the eyes to have the dark mode.

So if I haven’t a dark mode option, and a lot of different software’s that I’m going to be working with a lot, I’ll often turn on the dark mode. And then if you go straight to the dashboard, it’ll, it’ll be in this dark mode. And again, if you’re working in where there’s less lighting, or just if you’re working in something a lot, it could be a little bit easier on the eyes to work in the dark mode. Obviously, I won’t do presentations in the dark mode, because people are used to the light mode, they might see me as like a black hat bookkeeper or something like that.

And that would, that wouldn’t be good. But again, it can be kind of easier on the eyes. So I don’t know why they took our black that term takes away our black hats, and black hats go along with everything, they kind of match with everything. And now, white hats get to kind of dirty after a while you would think but in any case, we’re going to turn it back on and we’re going to put it back to the light mode here.

So that that’s something again, if you’re working in QuickBooks a lot, you know, any software I have where I can lower the tone because this whole page being very white Unlike windy only light White can kind of wear on your eyes after a while. So I would consider that particular option there. And, and again, things will change a lot within QuickBooks Online, which is kind of neat. And this is one place that you might want to go in the QuickBooks labs to check out what they’re what they’re currently looking into.