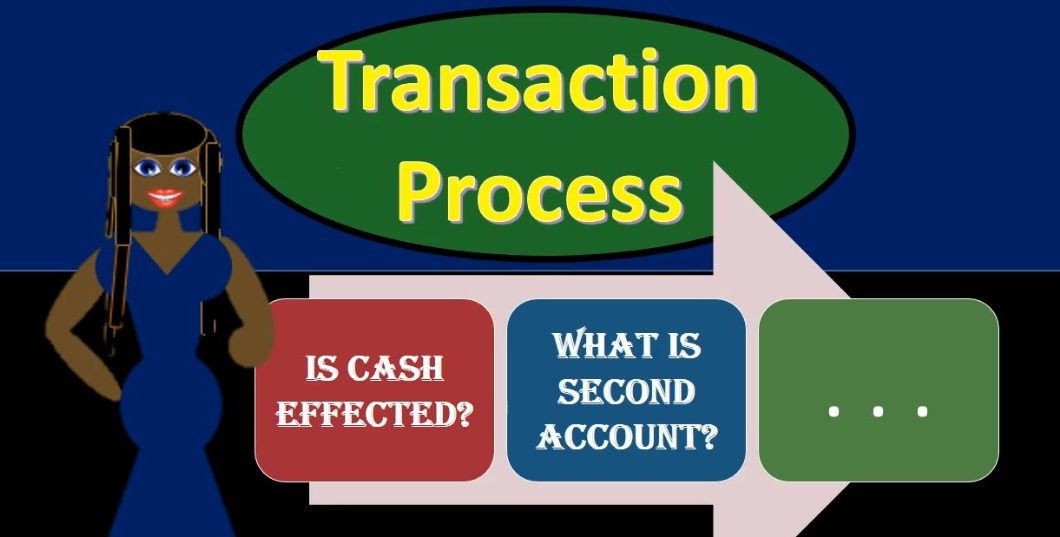 That is one of the reasons of course that we need at least two transactions Two accounts that will be affected. So that one if one account was affected, in other words, we would have only one thing happening. And we would be out of balance, we need at least two things happening in order for a transaction to do something, and also remain in balance. thought process. Now that we know those transaction rules, we’re going to think of a thought process. And the reasons for the thought process are one, that it’s going to help to get us moving many times in the accounting process. account. It’s one of those situations where if we don’t know what’s happening, we cannot move forward. It’s either we know what’s going on and we can move forward or we hit a wall, our transaction process can help us to start moving forward, we start thinking through the steps that will get us going forward.

Another reason for a transaction process even if we are good at recording financial transactions, is that it’s going to make it easier it’s going to be a faster process. The point of a process is to make something more efficient. A process can make things more efficient. So as people first learn accounting transactions, they often tend to memorize entire transactions that are pretty simple transactions. But if we have a process, we can then apply the same process to much more complex transactions. As we get to more complex journal entries later on. If we when we get to journal entries that have a lot more accounts involved, it’s much more difficult to just memorize the entire transaction which accounts are going to be debit and credit. It’s a lot easier for us to go through our thought process and construct the journal entry in a methodical way and and think through it in this system.

Therefore, we’re going to use that to first think of cash in order to start constructing the journal entry. It’s also easy to know whether cash is going up or down. When considering other accounts. It’s more difficult for us to know whether the account is going up or down. And later on more difficult to know whether or not we should debit or credited cash, we will pretty much get that pretty soon automatically, especially since we are dealing with cash so much. If cash is affected, then we want to see is cash going up or down? Is it increasing or decreasing? Once we know that we can record cash, we can record that part of the transaction and then focus on that The other accounts that is affected. Typically in the beginning here, there’s only going to be one other account is affected. 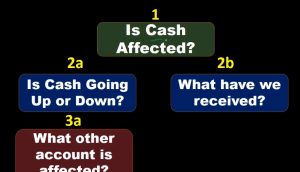 So once we know what’s happening with cash, we can say what other account is being affected in the accounting equation and use what happened in cash in cash going up or down to assess whether or not the other account is going up or down. What if cash is not affected? What if we have one of those transactions, one of those like 25% of normal transactions where cash is not affected, then I would think in our process, we want to think about what did we get? What did we get often being something like a supplies or an expense. Often if we’re getting something like an asset, it’s closer to it’s an asset, it acts the same as cash. Therefore, it’s going to be easier for us to know whether it’s going up or down later on, it’ll be easier for us to know whether we should be debiting or crediting it.

Why? Because cash went up. And therefore this side of the equal sign if liabilities is an account that is affected, it’s affected also needs to go up. So we can do that. Turman, what happens to the other account, of course, by using the accounting equation and the effect on the cash. This is the reason that we want to see what happened to cash first. So step three, of course is to determine if the non cash account is going up or down. It’s also useful to be able to look at this and then consider the other side of the transaction this side, as if we didn’t really know what happened to cash in order to double check our work. Therefore, we knew the liabilities went up because the asset went up. We also can think about the liabilities and think about what happened here. In this case, we got a loan for the business.

But we may say, is there any other asset affected? Is there any other liability or any other equity? If there’s not, then these are the only two accounts. If we have dollar amounts, then these $2 amounts for cash increasing liabilities increasing would then be the same. Now if we go back to step one, and we say, Well, what if cash is not affected? If cash is not affected, then I would think about what are we getting? For example, if we did work on account, meaning we did work and have not yet received cash, we still got something in that transaction, we got something that’s intangible something that’s not physical, we got an IOU and we typically call that a accounts receivable account. 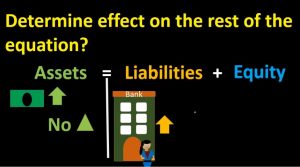 So I would still record what we received an increase in an asset an increase in the IOU account. as we as we get that, because it’s going to be easier for us to think about that oftentimes, meaning the accounts receivable account is similar to the asset account, it is another asset account. So it’s similar to cash, therefore we got more of it, and that asset is going up. So cash is our favorite asset. We would rather have the cash, but accounts receivable someone owing us money going up is also a good thing. Then we need to think about step two, what other accounts is affected. In this case, we’re saying equity is affected in that income is being earned. Now note that it’s a little bit more difficult for us to know whether income is increasing or decreasing equity, as it is to know whether the asset is going up.

Oftentimes, if we know that the asset went up, however, if we thought about this first, it’s easier for us to say that the equity then must be going up. So when we determine if the second account is going up or down, it’s easier for us to say equity market To be going up, because it’s on this side of the equal sign, and we already know that the assets went up, then of course, we want to double check our work, we want to say, Well, does that make sense that equity is going up? It does because we earned revenue income is going up income, then is increasing net income, and therefore is increasing total equity as well. We could then go through and check and just see if there’s any other accounts affected, meaning no other asset affected, no other liabilities affected. Therefore, we’ve got the assets increasing equity increasing, we remain in balance, if there were $1 amount, these $2 amounts would be the same. 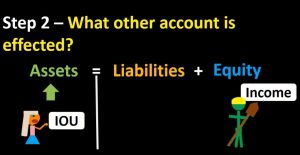 Back to our thought process, remember the thought process then is first question is cash affected. Second question. If cash is affected, is it going up or down, we will then record the cash side of the transaction. We will build what we know as we know it, then we’re going to see what happens to the other account that’s affected. usually just one there could be more than one but usually just one other accounts using the fact that the cash account has gone up or down in order to answer this second question. If cash is not affected, then we’re going to ask what have we received? What is the thing that we have received, often being something easier to understand, then then another type of account and then we’re going to use that in order to determine what happens to the other account that is affected using the accounting equation, and using the fact that this account went up or down objectives. We are now able to list steps for recording transactions. explain the reasons for using a process when recording transactions and apply a thought process to recording transactions.