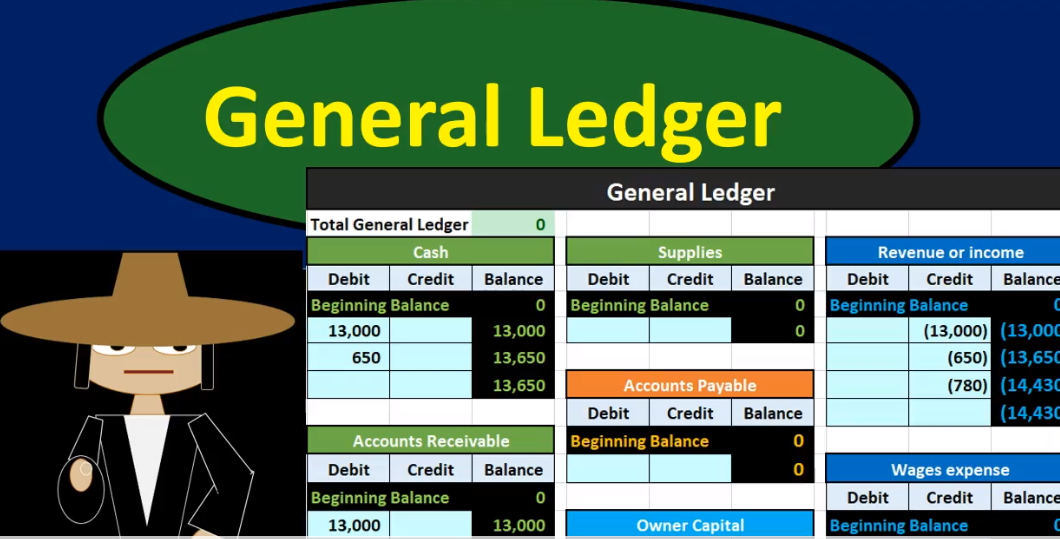 But when we consider the general ledger, it’s not as complex as it would first seem, it just is going to be a list of accounts that will be in that familiar format, meaning it’ll be in the format of accounting, I mean the accounting equation of assets First, the green accounts, cash, accounts receivable and supplies, then liabilities, then the capital accounts, then the income statement accounts of revenue and expense accounts that were the reason it’s such an intimidating looking thing is because it’s also going to include detail within these particular accounts. So rather than just having a trial balance, providing us with these ending balances, the ending balance has been adding up to the debits equal in the credits. We’re going to show the actual detail for a particular time period in order typically by date or order of transactions as they occur within the General Journal.

So all the transactions that we posted in prior transactions, whether they be to the using cash or part of the accounts receivable cycle or part of the payable cycle part of the sales cycle or purchasing cycle, they will then be posted to the general ledger. And we can think of the general ledger then being the thing that is used to construct the trial balance. So in this example, we’re showing these two particular accounts that deal with cash that are then posted to the cash general ledger. We’ve got the cast GL, the GL often for short for general ledger, and we have the debit side and the credit side note that we have via cash here being debited in this journal entry being debited in this journal entry. It being listed in order by date within the cash account only showing that half of the transactions here the other half would be an account accounts receivable and accounts receivable for these two transactions. And we can see that we are increasing the running balance as we go.

We need to however, still understand this and the only way to really understand it is to do it so that we can then see when there’s problems in the system so that we can understand what the system is doing when it kind of generates this trial balance so that we can then drill back down from the trial balance to the source documents to the data that has originally been input in order to troubleshoot problems with the Indian data. Let’s consider a few of these accounts. In turn, we looked at the cash account. Let’s consider now the accounts receivable account here. The accounts receivable account we are having an asset account that means that of course the debits will always be winning. You may have learned that when considering the T accounts when we consider the T accounts.

We may have been Thinking about this primarily in the case of we add up all the debits, then we add up all the credits and subtract them. And in this case, we would get 780 debits over credits. But note that the benefit of a trial of a general ledger in this format the benefit of using Excel, it’s very easy for us to also calculate a running balance. So note that this is the same as a T account, in essence, in that a T account is a shorthand way to write the debits and credits by hand and then figure out by adding up the left and right side the debit and credit side and subtracting them what the balance is. But if we put this into a computer system, we can just add a another column very easily, and then have a running balance. And so we still have our T here, but now we have another running balance on the right hand side. And that just means that we have zero starting here.

And then we had 13 increasing on the debit side, debits will increase a debit balance account bringing that balance to 13,000. debits went in, then we had a credit of 13. It’s a debit balance accounts credits are the opposite opposite makes it go down, back down to zero in this case, then we had a debit of 650. The debit being the type of account where in normal balance debits increase in the normal balance to 650. We then have another debit of 780. Bringing that balance from 650 up by 780 to 1004 30. We didn’t have a credit of 650 bringing the balance down from 1004 30 down by 650 credit to 780. That then our ending balance also no should see a pattern here in that we can see what is happening and we should be able to interpret pretty much what’s happening in the accounts receivable I should say in the account. receivable, what that pattern is meaning the debits represent invoices we sent out if we look at the journal entry, back to the journal entry where this was posted from, we can see that we had a debit to accounts receivable and a credit to revenue.

Here’s the debit to cash. Here’s the credit to accounts receivable. In the middle there, we had another invoice that went out this 780 increase in the receivable and increasing revenue. There’s the increased revenue, there’s the increase to the receivable. Of course that is what has not yet been paid. That is what still remains in the accounts receivable account. If we take a look at another account for an example, that being the revenue account, in this case, we have the revenue starting at zero, it’s increasing by 13,000. Then by 650, then by 780. Notice that the revenue account is representing credits, all of our accounts are representing credits with brackets, and we have the credit in the credit column when considering the general ledger account. Also note that revenue only has credits meaning it’s only going up, revenue typically does not go down. And that will be the pattern. And when we look at revenue, we should just see a bunch of credits.

Unlike when we looked at the accounts receivable, where we had debits and credits over here, the balance of an account of accounts receivable is a debit normal balance account. But we’ll have credit transactions of the credit transactions reducing the account balance the debit transactions, increasing the account balance on the revenue side, it’s a credit normal balance account, and therefore credits increase debits would decrease but typically we won’t see any debits because revenue only goes up customers only pay us We do not typically pay customers, what will the transaction be? It will usually be debiting accounts receivable crediting revenue. If we’re in the type of company that invoices clients, meaning we do work, then we invoice the client and expecting an IOU expecting money a check in the mail from the customer in the future. So you’ll note that all these transactions related to the increase in revenue are a debit to receivable credit to revenue.

The second piece of that been the accounts receivable going down and the cash then been received. If we take a look at the next step, then that step the creation of the trial balance, so we have just a small trial balance here because the general ledger can be overwhelming. Clearly, if we’re looking at a fairly extensive problem or a extensive company, this GL will be very large, it could be a very extensive l. And especially if we’re looking for an entire year worth of data, we’re looking at only a few transactions here. If we’re talking about a year’s worth of data, then especially the cash account and the receivable account and say the revenue accounts could be pages long. So just keep that in mind that we’re kind of simplifying the data here. But the essence is the same. If you look at an extended, messy, huge general ledger, all you’re looking for those Indian balances when constructing the trial balance, we’re just pulling those ending balances here. In this case, those been cash being pulled over from the GL to the trial balance at 13,006 50.

The accounts receivable being pulled over at 780 from the GL to the accounts receivable, nothing in supplies, nothing in accounts payable. Nothing in owner’s capital at this point and revenue is that credit of 14 430 been pulled over to the trial balance 14 430 nothing in the wages expense or utilities expense at this time, and therefore, it’s going to be easiest for us to see on the trial balance. One of the reasons for pulling these balances to a trial balance is that it’s easy to see that the debits then should equal the credits. Once we pull all this data over, then if we were to add up the debits, the 13 650, and the 780, we would be equal in the credits of 14 430. And therefore if we were to subtract the two out, we would have a zero balance. We can also calculate net income easily in this case that just the 14 for 30 revenue minus expenses, us at this point only having revenue of 14 430 and no expenses. Remember the sequence if you were to add to get a question as to how does this happen in order we have the journal entries. The journal entries are then posted to the general ledger, the general ledger then we’re taking these ending balances to create The trial balance. The trial balance will then be adjusted adjusted trial balance but will ultimately be used to create the end product of the financial accounting. Those been the financial statements balance sheet income statement statement of equity objectives, we are now able to define the general ledger list components of the general ledger and explain how the general ledger is used.