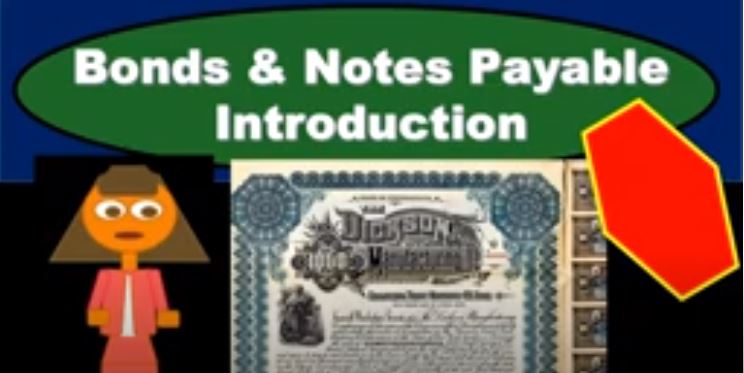 In this presentation, we will introduce the concept of notes payable as a way to finance a business. Most people are more familiar with notes payable than bonds payable, the note payable basically just being a loan from the bank. Typically, the bond payable is a little more confusing just because we don’t see it as often, especially as a financing option. From the business perspective, we often see it more as an investing or type of investment. But from a loan perspective, it’s very similar in that we’re going to receive money to finance the business if we were to issue a bond, or if we’re taking a loan from the bank. And then of course, we’re going to pay back that money. The difference between the note and the bond is that one the note is something we typically take from the bank. Whereas a bond is something we can issue to individuals so a bond we could have more options in terms of issuing the bonds than we do for a loan. Typically when we have a loan, we typically are Gonna have less resources, we can take a loan from the bank. When we pay back the bond, we often think of the bond as two separate things. And we set it up as two separate things, meaning we have the principal of the bond that we’re going to pay back at the end. And then we have the interest payments, which are kind of like the rent on the money that we’re getting, we’re getting this money, we’re gonna have to pay rent on it, just like we would pay rent if we had got the use of any physical thing.

And that’s going to be the interest for a bond, we pay interest on just the interest as we go typically, and then we pay back the principal at the end, so we kind of separate the two we separate the rent from giving back the original principle. We could do that for a note note, that a note has a lot of flexibility, a loan has a lot of flexibility, we can set it up in many different ways. We could set it up in such a way that we’re going to pay back both interest in principle at the end of the loan. So that would be one common way to set up a loan meaning if we got this money today, we might Hey, we’re not going to pay back the loan is set up that whenever it’s due, if it’s due within five years, we’re not going to pay anything until the end, meaning we’re going to pay the original back. plus any interest that we owe the rent on the money on the usage of the money we got, at the end of the five year time period. That’s one way we could set it up. Most people are more familiar with an installment type of setup where we’re going to be paying back periodically as we go. So if we talk about a mortgage, or if we talk about a car payment or something like that, typically we have monthly payments, and the bank likes that.

And people like that oftentimes, because then it gives us kind of a standard number to look at. This is what we owe each month, and we can see the progress of it and we can see that we can feel comfortable that the payments are happening. So that’s a typical way that that alone is going to be set up. So that would be another format we can set up as we can say we have a standard payment. We’re getting a loan for this amount, and then we’re going to make standard monthly payments possibly as we go. And those payments will include principal and interest. This is going to be the confusing piece right here that the fact that the payments that we make monthly, if we have some installment type of payment agreement that we’re paying back, the fact that the payments include principal and interest is confusing, and takes a little bit more understanding. So we’ll go through that calculation, it’s a little different from a bond, which is almost easier in a lot of different in a lot of ways because the bond we can separate the two, the bond, we say, Hey, this is the principal that we’re going to pay back at the end, we can present value that or think about what the value of that will be at the end of the term. And then we think about the interest component that we pay periodically as we go just like if we were renting an apartment, we pay the rent as as we live in it. And then at the end of our lease, we give back the apartment right here. It’s just happens to be the same thing.

We have money We got money, we’re getting to use the money, and we’re paying back up something, we’re paying back rent on the use of the money as we go. And then we’re going to give back the original money at the end, that would be a bond. In terms of an installment Note, however, we’re giving back some of this original amount. And we’re going to be paying some interest with every payment. And the tricky thing is that as this original amount goes down, the amount that is allocated to interest will decrease. And that’s what we’re going to have to do an amortization table. And we’ll have to figure out then how much of each of these payments are going to be related to interest, how much it’s going to be related to principal, because each payment will have a different portion related to interest in principle, you might ask why we would set it up that way. Why would we do that? Well, our main goal here is to make this payments standardized. So that’s what people want to see the bank wants to see that we can make the payments on a standard amount And people want to have a standard payment so they know exactly what they’re going to pay. The only way to do that is to is to adjust the amount that’s going to be allocated between interest and principal, because those two will vary as we go. This will make sense as we do the calculations as we go through amortization tables.