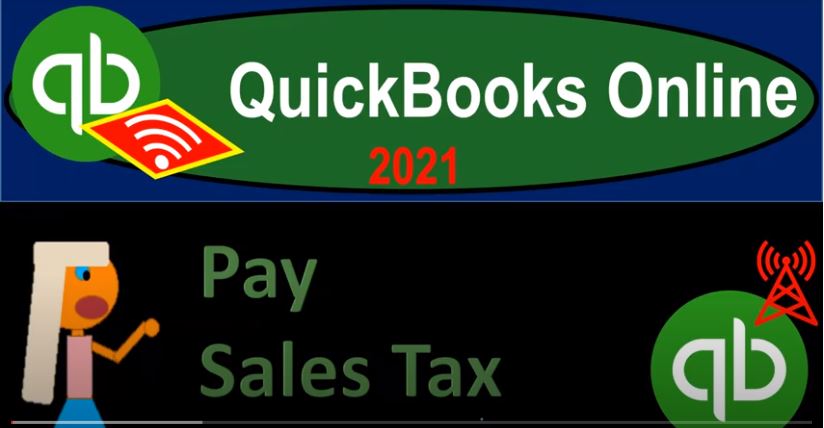 And there we have it. Scrolling back up top, we’re going to be range changing Indian at 1231 to one, run that report, close up the hamburger up top hold down, control, scroll up just a bit to get to that one to 5%. Then we’re going to go back on over to the first tab we’re considering the payment of the sales tax. So let’s just kind of recap the sales tax here and consider the payment process of it. So remember, sales tax is not something that we have to charge we’re not I mean, we’re not the ones that are basically setting the sales tax or being used by the government to be their collection agency.

And for the US it’s going to be state and local agencies, who are the ones that are causing us to be their tax collectors and it’ll pay them the tax. So then once that’s going to be set up, the question is well, who do we have to then pay the taxes on or what types of things are subject to sales tax. For that, we’re going to go then to the sales items on the left hand side, we go to the products and services.

And, and then and then charge the sales tax. Now there could be an exception, if you had a customer that was not subject to sales tax, even though the inventory item typically is but that’s kind of an exception to the rule. So that means that if I go back then over to our our second tab, and I look at the sales tax payable, this is where they’re putting the sales tax. Now if I go into any of these items, then we’re going to see it’s created from the sales, receipts and invoices.

And that means that what happens when we record this accounts receivable goes up by the full amount 399. Sales only goes up by the 380. We’re not going to record on our sales in our revenue on the income statement, the full amount, we’re not including the sales tax on our income statement, because it’s not really what we charged, we were just forced to collect it on someone else’s behalf.

Now when do we actually pay it? It will depend on the location by location, meaning, oftentimes it will different states will have different amounts or different time periods that you’d have to go by because once against a state and local tax and not a federal tax typically in the US. But normally, the more sales tax you have, the more often you’re going to have to pay possibly monthly or quarterly or yearly.

But it would be calculating the gross sales, the taxable sales, and then give you your tax calculation, which should come up to the same number if we were in real time. And then over here, we have file your sales taxes, so print the tax form for the State’s website and fill, fill it out, you can go to the link for the some of the state information there, then you got to write a check to your agency or print one, that means the actual payment that we’re going to be making mail the form and check to your agency.

And you don’t want to, you really do want to use their little widget character for sales tax. But again, because it’s a practice problem, we’ll do it in this format. And this is going to go to our state agencies. So we need the state agency that we are selling to see if so I don’t think I’m going to go back to this report and just say the person we’re paying is actually this whole thing here.

Now we could run some reports for the taxes. So if I ran some reports up top, instead, I want to take a look at say the tax liability report, then it’s going to generate our sales tax report. And what we really want is the liability report for January. So I’m going to say, Oh, 101, to one to 1231 to one, let’s run that report. And this will basically give us the sales tax that we need for that timeframe, the total being the 198 570.

So that’s what you would expect them to pay, because that’s what we collected on in January. So I’m going to go back on over. That looks good. So I’m going to go back to the sales item down below. Let’s go back to the taxes tab, because now they took us over to the reports tab. And then if I was to pay this in real time now, then it would give us a little widget down here that would help us with the process of pain. But because we’re in a practice problem, we can’t really use the little widget because it depends on being basically in real time.

So we could set our range up top, and then set our payment schedule. And if I view this item here, then we can go through our payment process for the amount that would would be due. And so again, we can’t really do it for a practice problem, because this thing works basically in real time.