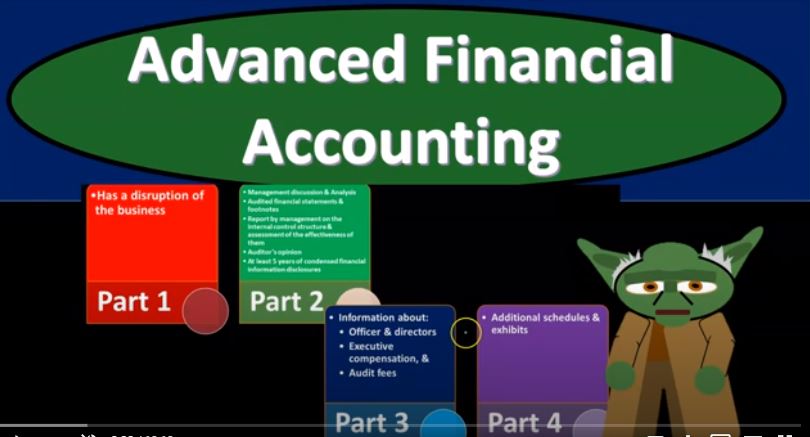 So remember the exchange the Security and Exchange Commission is the one is the federal body basically regulating this information so they form 10 k is the annual filing to the SEC large credit filers are companies having at least 700 million in aggregated market value form 10 k must be filed within 60 days after the end of the company’s fiscal year. So we’re talking about fiscal year end of the fiscal year that if it’s 1231 year in, for example, they have 60 days in which to file the form 10 k after that 1231 deadline, companies having at least 75 million and less than 700 million in aggregate market value are accredited filers, accredited filers need to file form 10 k within 75 days after the end of the company’s fiscal year. And then small businesses that do not meet the requirements for an accredited filer have until 90 days after the end of the fiscal year. Obviously it’s a big process for a large company to put this information together. So this is a time consuming process to be filling out the 10 k in some information some time is needed after the close up The year. So form form 10 k parts include part one, part one has a description of the business, then we have part two, which is really going to be like kind of the meat of this thing has most of the information within it. It’s going to include the management discussion and analysis, audited financial statements and footnotes. So they have to be audited financial statements and footnotes. So we’re gonna have to put that process in place. And again, the audit, you know, obviously, it’s a time consuming process as well report by management on the internal control structure and assessment of the effectiveness of them. So we have this added this reporting this emphasis on the internal controls now, especially for these large companies, and an attempt to have more basically transparency and be able to validate the financial statements be more secure about the financial statements given the fact that we can rely on the controls, then we got the auditor’s opinion. So we got the auditor’s opinion and at least five years of condensed financial information at disclosures Part Three is going to be the information about the officers and directors, executive compensation and the audit fees. And then part four is going to be additional schedules and exhibits.

Next we have form 10 Q, which is going to be the quarterly report to the SEC. So notice, you can say yearly, you got the financial statements for the year on the 10 K. And now you could say, well, it’d be nice if we had a little bit more information a little bit more transparency, can you give us an update on a quarterly basis, and that’s going to be now of course, the 10 Q. Note that as we do this, as we add, the more information, there is a debate and argument just like you would have within a company in terms of what’s the benefit versus the the cost cost benefit analysis here. So as we get more information, more transparency from the company, it does take time for them to put this together. And so whenever we have regulations, increasing and decreasing the requirements on the company, there’s that kind of give and take obviously, we want the transparency because that’s going to give faith to people to invest. And that’s one of the major reasons why US companies do quite well because obviously people have more faith and therefore, even if there’s not as much of a growth potential they’re willing to put money in and and part of that is driven by the fact that there is more transparency given by the requirements that we have to have the reporting requirements. However, there could be a point there is a point whatever that point is, where more reporting too much reporting can become burdensome to the point where the the benefit doesn’t outweigh the cost. And obviously, there’s always questions in terms of how much reporting is needed. But you know, we got the annual reports and then we got the quarterly reports. This is going to be the quarterly the form 10 q. So quarterly report to the SEC, large, large filers and accelerated filers need to file a form 10 q must file within 40 days after the end of each of their first three quarters. So notice the 10 Q is going to be filed after the end of the first three quarters because the fourth quarter, then you’re going to have The yearly report which is going to be the 10 K, other companies need to file within 45 days after the end of each of their first three quarters form 10 Q is not filed for the fourth quarter because the form 10 k will be filed after the end of the fourth quarter.

Therefore, it might be something that, you know, it should be known then to people and decision makers and whatnot, regulators and whatnot. So proxy statement material submitted to shareholders for votes on corporate matters. So once again, proxy statement materials submitted to shareholders for votes on corporate matters. voting on these matters often takes place at the annual meeting. It can also happen at special meetings. However, accountants legal liability and periodic reporting. So what’s going to be the accountants legal liability here, the 1934 Securities Exchange Act gives a limited level of legal exposure from involvement in the preparation and filing a period optic reports for filing materially false or misleading statements, civil liability is imposed. The major defense for accountants to combat any lawsuits brought under the 1934 Act is do his due diligence defense. So, in other words, if there was some some liability that was brought to the accountant to the accountant then how would the accountant defend for that? They would be arguing typically that they did the due diligence in order to prepare to prepare the reports Edgar electronic data gathering, analysis and retrieval system he DGA our Edgar electronic filing system developed by the Securities and Exchange Commission the SEC firms electronically file directly by using computers. This will facilitate the data transfer and make public data available more quickly. The efficiency and fairness of the securities market is increasing. Through the reporting, accepting, dissemination and analysis of time sensitive data filed with it