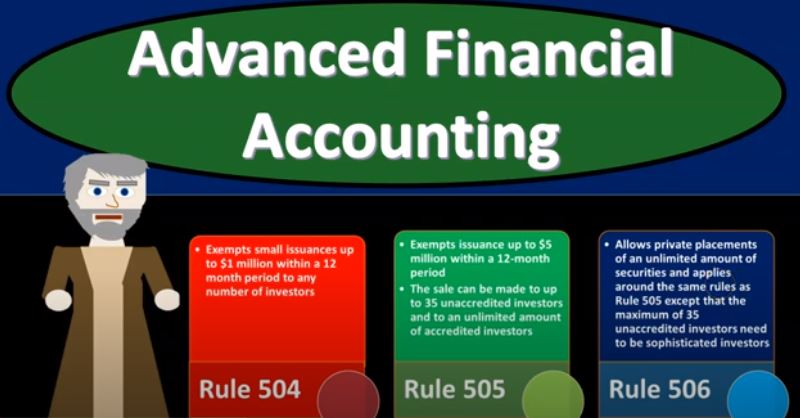 The SEC requires at least five years of selected financial information providing key figures or registration process types of securities And securities transactions exempt from registration include commercial paper with maturity of nine months or less issues where the securities are offered and sold with within only one state. So we remove basically the interstate type of thing. And just note that the SEC, of course, is a federal type of of regulation here. So you always got these kind of kind of idea you want to keep in your head when you’re thinking about the legal the law, and that’s going to be well, what is it? Is this something that’s going to be on a state level? Or is this something that’s going to be on a federal level, the SEC, is operating here as a branch of the federal government, you might say, Well, why, you know, why are they justified to do that? I mean, why why wouldn’t estates be regulated and what happens from state to state and typically when it has to do with this interstate commerce that the the thing a lot of times in a law that’s going to be on the Fed side of things, if the argument is Hey, look, this is affecting multiple states and transactions that are going to be happening between and among states, as well as transactions here, if it was only happening in one particular state, you’re not going to be dealing with anyone outside the state, then you would think the argument would behave, Yeah, fine. It should be handled by the state. That’s an interstate type of thing. Why would it be, or that’s something that handled exclusively by the state. But if it’s something that crosses borders, then you would think that the Fed you know, might have some some role to play in it. So this is something that if that were thinking about trading transactions could go across states and therefore you think it might be on a federal type of level as it is with the SEC here. So issues of securities by governments like US Treasury bonds, or municipal bonds. So those are issued by you know, the US government registration process, we have tier one issuance of up to 20 million within a 12 month period may be exempt from registration if the entity files a notice with the SEC. And quote, offering circular in quote, containing financial information and other information provided to the person to whom the offer is made. Ongoing operating. Ongoing reporting, then is not required beyond a final report on the results of the offering. And then we have the tier two, which is an issuance of up to 50 million within a 12 month period may be exempt from registration.

When the entity files in offering circular and the financial statements are audited, so an audit would be required in that situation. Ongoing reports are required, but only semi annually rather than on a quarterly basis. So it’s a bit less stringent here for tier two registration process. Regulation D presents three exemptions from full registration requirements for private placements. So we have rule 504 exempts small issuances up to 1 million Within a 12 month period to any number of investors rule 505 exempts into with issuance of up to 5 million within a 12 month period. The sale can be made up to up to 35 unaccredited investors and to an unlimited amount of accredited investors. And then we have rule 506 allows private placements of an unlimited amount of securities and applies around the same rules as rule 505 except that the maximum of 35 unaccredited investors need to be sophisticated investors so they have that stipulation of sophisticated investors registration process. The offering process begins with the picking of an investment banker or an underwriter so we got an investment banker or underwriter. In our process, the underwriter provides marketing information and directs the distribution of the security Some marketing information directs the distribution. Then we have the underwriting of the underwriting agreement, a contract between the company and the underwriter specifies items like the underwriters responsibilities and the final disposition of any unsold securities remaining at the end of the public offering. The registration process continued registration statement registration statement, the process of public offerings and securities begins with the preparation of the registration statement. Companies need to select one from about 20 different forms of sec currently has for the registration securities. Most common are so the forms to be used here would be the form s one most comprehensive registration statement. So this is one that’s going to be the most comprehensive and then you have some shortened or forms if you already have done business basically with it. So we have form s two then which is an abbreviated form for business. registrants, registrants who have other publicly traded stock, so less information would be needed. So they can have an abbreviated form there. And then you got form s three, which is brief form available for large established registrants who stock has been trading for several years, which once again, you would think given that you’d need less information than if it was starting from scratch or someone that wasn’t already working in doesn’t already have the information process would In which case, you’d have to use the full longer form the s one.

So let’s go into a little bit more depth than these forums. We’re going to start off with the form as one has two levels of disclosures part one, the prospectus is intended for investors primarily. So the prospectus is intended for the investors who are going to be obviously investing in the stock then we got Part Two includes more detailed information. The registration statement must be signed by the Principal executive, financial and accounting officers and a majority of the company’s board of directors, the company will then submit its registration statement to an SEC review by the Division of Corporation Finance, sec review and public offering. So most first time registrants receive a customary review, quote, customer review. That is a thorough examination by the SEC, that may result in either acceptance after this examination process or a comment letter outlining the deficiencies that must be fixed. So they’re gonna say, Hey, we reviewed your we get we gave an extensive review, and they either said everything was perfect, or quite likely, you know, you’re gonna get a letter saying we’d like you to fix this, that and the other thing, and then you’d got to go from there and fix this, that and that other thing. established companies that already have stock widely traded usually are subject to a summer review or a cursory review. So often if they’re already there, the review is going to be a less intensive summary review cursory review, the company can start selling securities to the public once the registration statement is effective. A preliminary perspective can be issued between the time the registration statement is presented to the SEC and its effective date. It provides tentative information to investors about upcoming issuance, so they can get that statement out beforehand to get out some information before the actual issuance sec review and public offering company prepares a tombstone ad in the business press to inform investors of the offering upcoming so they got the ad out there saying hey, we got an offer and upcoming here, the time period between the initial decision to offer securities and the actual sale. Sale maybe as long as 120 days.

The shelf registration rule was developed by the SEC for large established companies. With other issuance of stocks already actively traded. They may file a registration statement with the SEC for a stock issue that can be brought off the shelf and with the aid of an underwriter updated within a short time, the time is usually two or three days, which is a lot better accountants liability to the registration process. So what’s the accountants liability? Well under Section 11 of the 1933 Act says accountants are liable for any materially false or misleading information to the effective date of the registration process so false materially materially or misleading information. The underwriters in charge of the sale of the security usually require a comfort letter from the registrants public accountants for the period between the filing date and the effective date. The letter provides additional evidence of deprivation Public Accountant has not found any adverse financial changes since the filing date.