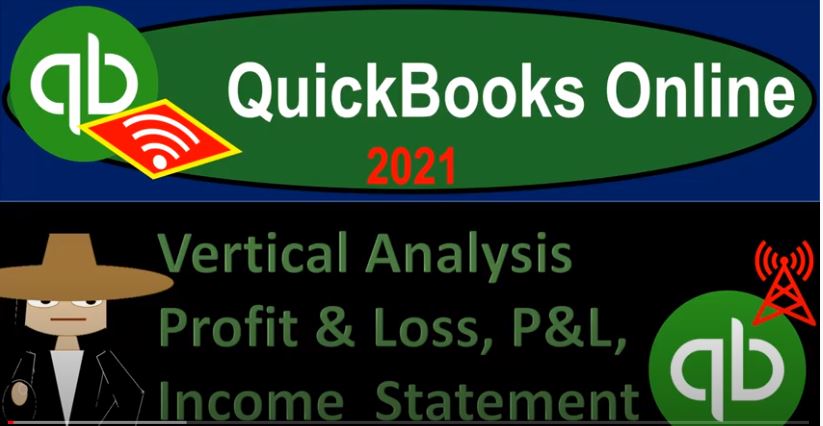 And then we can do a horizontal kind of comparison, comparing, you know, one column to another column in a horizontal kind of fashion row to row. This time, we’re going to do a vertical type of analysis, comparing something to the income statement itself on the same line item in the same column. We did this on the balance sheet when you see it on the balance sheet. For example, we compared each line item of assets to the total assets, which you can imagine in like a pie chart type of format, similar to what you might see in like an investment portfolio type of analysis. on the income statement, it’s a little bit different.

If we compare everything else to it, then we’re gonna say like this line item 2250, divided by then we’re picking up this 110 200, point seven, seven, move the decimal two places over, we get that 22.06 about. So that’s going to be the income, the percentage of income line items, so we can compare that to the total income. And that could be useful. And then down below, when we compare the expenses, we’re not comparing expenses, total expenses, but also to what the expenses are used for, we’re comparing the expenses to income.

And this is quite common. So we’re going to be saying then, the, for example, the cost of goods sold 405, divided by the income 10 200, point seven, seven, and that’s going to give us our 3.97 about Now, obviously, cost of goods sold, if we were talking about a retail store, or something like that would be much higher, oftentimes, it’s going to be a really key number here, because it’s a little bit unusual circumstance, with the landscaping, it’s not as high as the number that you would see in other kinds of companies that have inventory. And then we could do a similar comparison with all of our expense accounts.

And these are basically, you know, comparing the consumption, we use these expenses in order to generate revenue in the same time period. That’s why it’s going to be a relevant comparison. And then you could do things like seeing, you know, obviously, your larger comparison line items, and and thinking about whether it’s worthwhile for those expenses or not. Also, of course, this type of comparison will work well if you’re benchmarking to somebody else again.

So if you’re benchmarking to another company, most likely one that’s larger than you are, because you’re trying to you’re trying to mirror them, you’re looking up to them, you know, and you’re trying to benchmark to them, then they’re they’re gonna, their dollar amounts are gonna be higher than yours, most likely, you can’t really compare your dollars amount, you’re going to be saying now my incomes terrible compared to their income, my net incomes not lining up. But you can then look at your percentages and say, well, am I spending, you know, in the same kind of ratio, the same format, as they are in relation to income, and that could give you some information to improve upon.

So you could look then at this column, the percentages actually, and compare that to a similar kind of calculation on a larger company. And that’ll give you more relevant information oftentimes, that you can actually take action upon. So that’s going to be this one. Let’s go ahead and do our normal kind of changes now. And then we’ll, we’ll save this thing. So I’m going to change the name, I’m going to call it an income statement again, just to do that change, I’m going to call it a vertical analysis income statement. Let’s get rid of that.

Well, we’ll keep the date here. And then we’ll get, we’ll do our similar things with the negative numbers in that stuff. So I’m going to say, let’s customize this report, we’re going to customize it, we’re going to get rid of the pennies going to make the negative numbers bracketed. As we’ve seen in the past, make them red as well, on the header and footer, we’re going to go to the header, I’m going to change it from a profit and loss to a, a, say in this a vertical analysis analysis, income statement. And note that I’ve spelled these two things incorrectly on purpose to show you that you do have the spellcheck option in here.

So at the risk of looking like I don’t know how to spell, I did that on purpose, just to show you that feature. And then we’re going to go down, and we’re going to remove the footer for the date prepared time prepared and report basis. So that we have that that looks good. And then I’m going to run that report. So I’m going to hold CTRL and zoom in a little bit, bring it up to one to five, I kind of wish I had it there the whole time. But I didn’t. So it’s no, it’s there now. So there we have our dates up top, we’ve got the negative numbers are bracketed. So there we have that looks very nice, the footer has been removed.

Let’s go ahead and save this as a PDF file, export it to Excel, and then add it to our group of Excel worksheets here. So we can save it to one single PDF file. So I’m going to go to our export an option here, export it as a PDF file, we’re going to save it, and then it’s going to pop up down here because we’re in Google Chrome. And so I’m going to minimize this. So we can do the good old dragging and dropping. And we get to say drag and drop multiple times, we’re going to open this up, open this up, we want it in our financial statements, then we’re going to drag that left clicking on it, drag it and then drop it dragging and dropping.

I’m gonna put my cursor on the the triangle to get the whole worksheet, right click on it, and then copy the entire worksheet, and then go back into my other worksheet and then put it in a one, it’s got to be in a one or you got to select the whole sheet, and then right click and paste it. And then I’m going to see if it fits on one page by going to the the Page Layout View. It fits on one page why that’s all I care about. It’s more than one page long, doesn’t concern me whatsoever. And then I’m going to change the date the name down here from sheet, I’m going to double click on the sheet and we’re going to call this vert a now income statement for the abbreviation.

And then let’s print this entire thing to a PDF. So we have all these forms on one PDF document that we can attach to an email if we so choose or choose so and so then let’s go to print. And we’re going to use our cute PDF printer once again to do it. So we have to have some kind of PDF printer. I’ve got a cute one. And then we’re going to go to the drop down down here. And we’re going to say this is we want to print the entire workbook. Entire workbook which is now 13 pages. I’ll scroll through it just so you can admire it, we can admire it together.

And so then we can zip this file and attach it. We got a lot of files now, we could send an Excel document if we want. But then we made this PDF file from the Excel document, we can further format it if we if we want to make it look a little bit different here as well. But you have that option. Let’s scroll through it again. So we can admire it again. It is something worthy of admiration and admiring, take it in, take it in the beauty. It’s full of wonder. Otherwise no one is wonderful. And there’s our vertical analysis income statement.